Step back in time to explore this remnant of a nineteenth century gold rush frontier town. 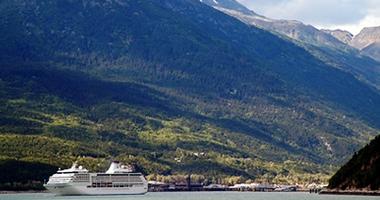 Sitting at the end of the Lynn Canal, Skagway was once the gateway to the Klondike gold rush and grew from a population of two in 1887 to 20,000 in just ten years. While the rush might be over, Skagway has a unique charm that continues attract visitors with its bordered wooden sidewalks and preserved historic building facades.

Skagway has two docks. The first is along the Lynn Canal directly south of town and the second is at the foot of Main Street a short five-minute walk to the centre of town. Usually the smaller ships will dock in town and the larger alongside the Canal.

Enjoy a stroll around town to admire the incredibly well-preserved buildings from a by-gone era. Meander along the boardwalks, take in some window shopping and admire the lilacs if you arrive in May. As a day trip take a ride on the turn of the century White Pass & Yukon railroad in an historic parlour car climbing from sea level to 2,865 feet in just 20 miles.

Halibut and salmon are staples but despite the small local population there is a diverse range of restaurants to tempt your taste buds.

Follow in the footsteps of by-gone gold prospectors and take the shuttle bus to the start of the Chilkoot Trail, and enjoy the stunning views as a day hike.

If a prospector found pay dirt he was onto a very good thing. This nickname became associated with gravel that contained a high concentration of gold.