A fascinating mix of cultural familiarity and exotic Caribbean, Barbados' capital, Bridgetown exudes a confidence of success. The most easterly Caribbean Island is worth travelling that extra distance. 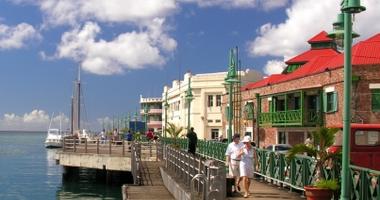 Stroll down the Bridgetown Promenade
1

The English established a settlement at Bridgetown in 1628 and would remain in power until Barbados became an independent state in 1966. The country remains within the Commonwealth and the reigning English monarch is the head of state. As the capital, Bridgetown is the economic and political heart of the country. Barbados maintains many English traditions and culture - so much so that the country is dubbed, “little England of the Caribbean.”

Cruise ships dock at the terminal located about two kilometres west of the town centre.

While in town consider visiting the Barbados Museum, which is housed within the former military prison. The exhibits offer a fascinating glimpse into the country's colourful history. Also contemplate checking out the Parliament, St Mary's Church and the Careenage area. However this is an island paradise so head out of the city towards one of the country's beautiful beaches including Brighton Beach, Colony Club Beach and Walkers Beach on the east coast. The beaches on the south coast also offer great surfing opportunities.

Enjoy some local Bajan specialities such as flying fish and cou cou, which is corn meal cooked with okra and butter.

Take a submarine tour for a unique maritime experience.

In Bajan slang, locals enjoy, “liming,” which in translation means, “hanging out.”

Head to the Pelican Craft Centre and pick up some locally produced handicrafts.