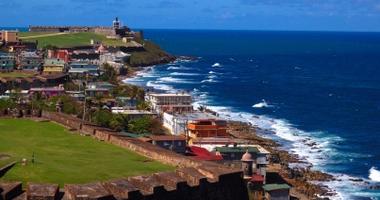 Officially founded by the Spanish in 1521, San Juan is the second oldest European colony in the Americas after San Domingo in the Dominican Republic. Over the centuries, Puerto Rico's capital established itself as a strategically-important location and as such the Spanish constructed the fort El Morro – which was subsequently attacked by both the English and the Dutch. Puerto Rico was formally ceded to the United States in 1898 after a military incursion. Today tourism is a significant industry especially for Americans who can enjoy a piece of the Caribbean without leaving American soil.

Admire the city's historic sites by exploring the district known as Old San Juan, which is an island connected by three bridges. Be sure to admire the Castillo San Cristóbal, a substantial Spanish fortress, the Alcadia, a town hall built in 1602 and the San Juan Cathedral. Also of interest is the San Juan Gate, La Fortaleza and the museum, La Casa del Libro. After fulfilling your culture fix, head to the beaches in either Condado or Isla Verde to relax and unwind. Adrenaline seekers will enjoy the La Marquesa Canopy Tour, situated a short 30-minute drive outside San Juan.

El Castillo San Felipe del Morro was an important fortification for the city and was declared a World Heritage Site in 1983.