Once the capital of the Soviet Union and as such hidden behind an iron curtain, Moscow has now abandoned secrecy to reveal a captivating European city steeped in history and cultural significance. 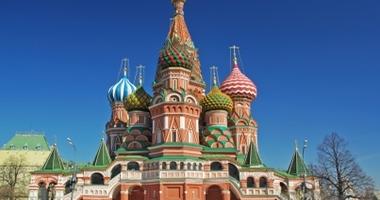 Strolling through Moscow's streets, it's hard to imagine the city started life during the twelfth century as a humble timber fort named after its location on the Moscow River. The city quickly grew in importance to become the capital of Muscovy by 1340. Today, as the capital of Russia, Moscow continues to exert significant political and economic influence across Europe. Savour the history, the culture and the unmistakable Russian appeal.

Cruise liners dock on the Moscow River, north of the city's centre.

At the heart of the Russian capital lies Red Square, a pedestrian public space that was originally designed as a market in the sixteenth century and features the iconic St Basil's Cathedral built in 1561. Bordering Red Square is the Kremlin, the political nucleus of the country; a tour of the Kremlin is a must do activity for architecture and history buffs. From Red Square, take a stroll up Tverskaya Street - the city's premiere shopping and entertainment strip. Also consider attending an opera or ballet at the internationally-renowned Bolshoi Theatre.

Enjoy traditional Russian cuisine such as borscht for entrée, shashlyk for main course and blini for dessert.

Consider paying your respects to Vladimir Lenin who continues to lie in state in Red Square since his death in 1924.

Greet a local with "pryvet"and say good bye with "Dasvidania."

Your friends will expect a Russian doll set, so maybe purchase a slightly quirky design rather than the traditional folk dress.