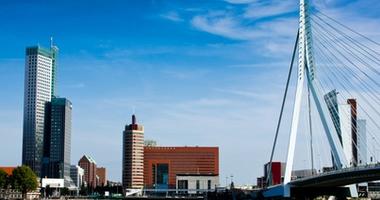 Giving the city its name, the dam on the river Rotte was constructed in the thirteenth century near the modern day Hoogstraat. Rotterdam's prosperity gradually increased over the centuries due to its strategically-located port; becoming one of Europe's most important ports by the late nineteenth century. During World War II the city was virtually destroyed, however, rather than reconstructing Rotterdam in the existing style, the decision was taken to use the opportunity to create a modern city. As such, Rotterdam today boasts innovative architecture that proudly looks towards the future.

Cruise ships dock at the port on the south side of the river about two kilometres from central Rotterdam.

Begin your exploration of Rotterdam by strolling around the city centre to admire the modern architectural wonders before heading over to the City Hall, an impressive art deco building constructed in 1914. If museums are your thing then head to the Maritime Museum, the Museum Boijmans Van Beuningen and the Kunsthal. The Het Schielandshuis is a rare seventeenth century building and is reported to be the house where Napoleon stayed when he visited the region.

If you can't pronounce, "andijviestamppot," just point to the menu and savour the combination of endive, potato and fried speck.

The locals will appreciate it if you say, “Ik hou van uw land.”

We realise that it's stereotypical, but a pair of wooden clogs are very cute.