The gateway to the world famous Norwegian fjords, this cosmopolitan city and its immediate surrounds demand attention in its own right. 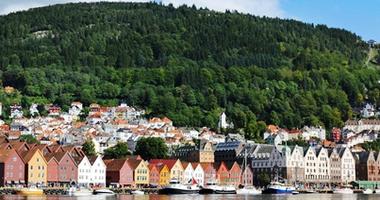 Sitting majestically on the west coast of the Norway, Bergen is the perfect place to discover Scandinavian history and culture, before embarking on a natural wilderness expedition. The oldest parts of the city are located on the north side at Bryggen, which features wooden houses dating from the early eighteenth century. Also perfect for a leisurely stroll are the neighbourhoods of Nordnes, Marken and Sandviken, before taking in the vibe of the buzzing harbour, Vågen.

Bergen's port is located at the centre of Bergen and is used frequently by Norwegian cruises.

The Bergenhus Fortress presents a fascinating glimpse into medieval Norwegian royal history. There are many museums to explore including the Hanseatic Museum and the Bryggens Museam. Alternatively wander through the Bergen Aquarium, Torget fish market or the Bryggen Hanseatic wharf. For stunning views, take the funicular up to Mount Fløyen, and admire the fabled seven mountains.

Visit the grave of Norway's most famous composer, Edvard Grieg, who penned the Peer Gynt suit. His country house in Troldhaugen has been preserved exactly as it was when he died in 1907 and is open as a museum.

Originally from the Norse, and now adopted into common English, the word fjord is the only English word to start with a digraph, a pair of written letters voiced as one sound.

Stylish hand-knitted sweaters are sold abundantly throughout the city.