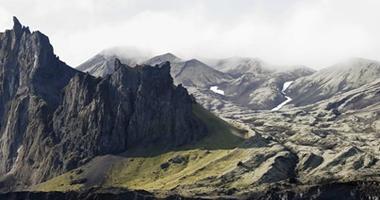 Located in the Arctic Ocean 600km north of Iceland, Jan Mayen became part of Norway in 1930. The island is partially covered by beautiful glaciers and features two distinct parts, the larger northeast Nord-Jan and smaller Sør-Jan – both sections are linked by an isthmus 2.5km wide. The highest summit is the Beerenberg Volcano in the north.

Without any sheltered harbours, ships generally drop anchor and passengers are tendered ashore.

Naturalists will rejoice as they take delight in spotting the 75 species of vascular plant, 176 species of moss, 66 species of fungi and 140 species of lichen. In summer, the moss becomes so lush that you'll sink down to your calves – a sensation to be savoured. Ninety-eight bird species have been sighted by the weather station staff, however it's believed that only 22 species have a significant presence including the fulmar, the black-and-white polar guillemot and the puffin.

With no restaurants or accommodation on the island, your lunch will most likely be prepared aboard your cruise ship for most Norwegian cruises.

Permission to climb Beerenberg must be obtained in advance, but for those who complete the climb, the sense of accomplishment and incredible scenery make the hike worthwhile.

Polar Bears haven't been seen on the island since 1990 – a distinctive call which is sadly missing.

We think the experience of being on a virtually uninhabited island in the middle of the Arctic Ocean will provide memories that out surpass any purchased souvenir.