Tweet
Read Time: 5.0 mins
The ancient Silk Road trade route weaves its way from China to Turkey on the Mediterranean Sea through the Central Asia steppe, passing through the fascinating countries known collectively as the ‘Stans – Turkmenistan, Uzbekistan and Kazakhstan.
According to Intrepid Travel, these ‘undertouristed’ nations have some of the world's lowest tourism density ratios, so you’re guaranteed an authentic experience. We do as the locals do and travel mainly by train, the most comfortable way to traverse Central Asia, in four-berth sleepers with toilets at each end of the carriage. The communal style of travel allows us to meet fellow travellers and locals – while not a lot of English is spoken, we have great conversations with just the odd word, plenty of hand signals and smiles.
The lengthy border crossings are an experience in themselves – we waited for officers to have lunch at one border, had our temperatures checked at another and shared meals with locals at yet another checkpoint. Food in the region is delicious and plentiful – another surprise. We dine on hearty meals consisting of rice, mutton and chicken with simple salads of tomatoes and cucumbers and fresh fruit. While the ‘Stans are Muslim countries, alcohol is cheap and readily available. 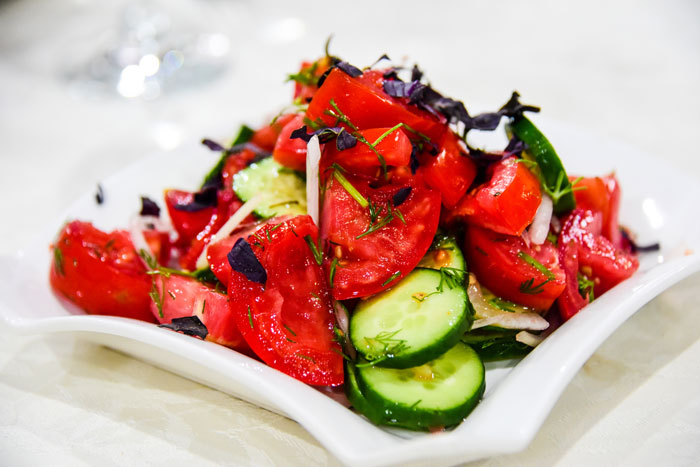 Fresh and plentiful, food in Uzbekistan is a centrepiece of daily life, often shared generously with travellers and guests. Image: Getty. 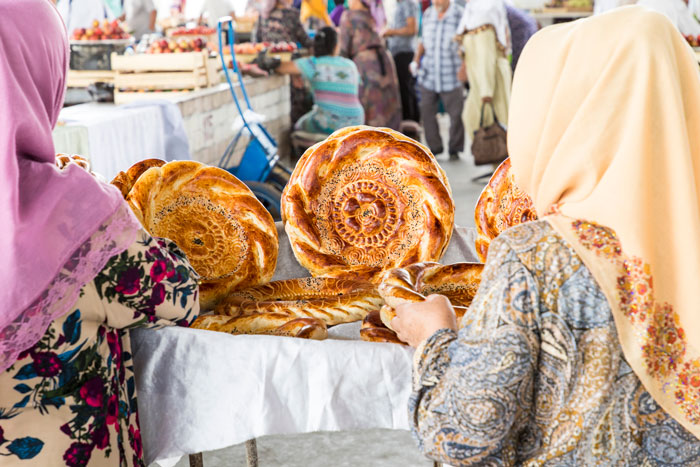 Women peruse fresh baked bread in a market in Uzbekistan. Image: Getty
In Turkmenistan, the capital, Ashgabat, rises out of the desert, all marble and futuristic buildings and gold statues of imposing local heroes everywhere. The buildings are relatively new, the city rebuilt after the 1948 earthquake that destroyed much of the city. Turkmenbashi Ruhy Mosque is a highlight, a vision in bright-white Carrara marble with gold-topped domes and minarets reaching into the sky. We step back in time here, taking in the ancient architecture of blue-and-gold- covered mosques, mausoleums and madrassas. 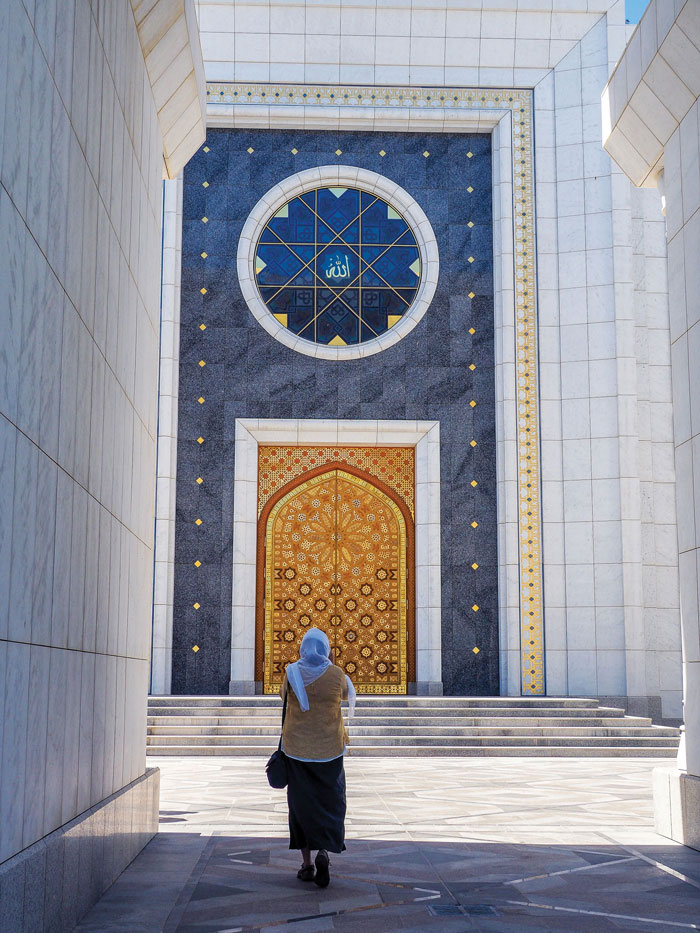 RELATED: 6 Places To Visit With Intrepid Before Everyone Else Does

About 260km from Ashgabat in the middle of the Karakum Desert, we visit the Darvaza Gas Crater. Also known as the 'Gates of Hell', this natural gas crater is 70m wide and 20m deep and emits the most incredible heat. Mesmerised, we spend a couple of hours taking photos of our silhouettes against the fire and the night sky from every angle. With just 10 people present on the night we visit, it feels like an exclusive experience. 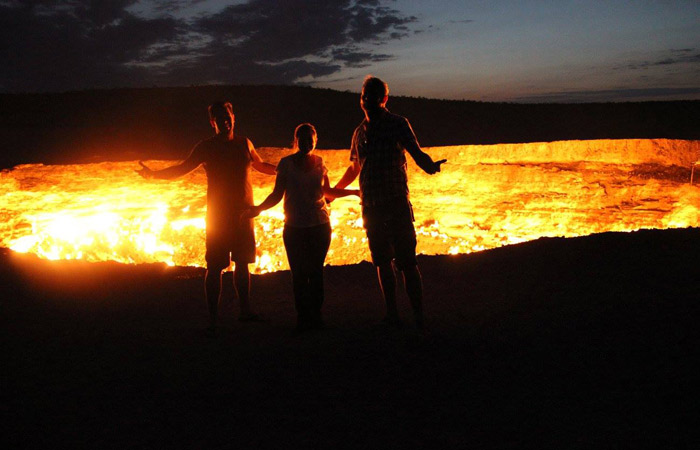 The impressive Darvaza Gas Crater sits 260km from Ashgabat in the middle of the Karakum Desert. Image: Katherine Benvenuti
Heading north to Uzbekistan, we immerse ourselves in the local scene, staying at a little family-run guesthouse in the ancient city of Bukhara. We try plov, a filling dish of lamb, rice, onion and carrots, at a restaurant overlooking the city, and knock back rough, local vodka bought for us at a neighbourhood bar where Uzbek music blares from a laptop hooked up to a TV. 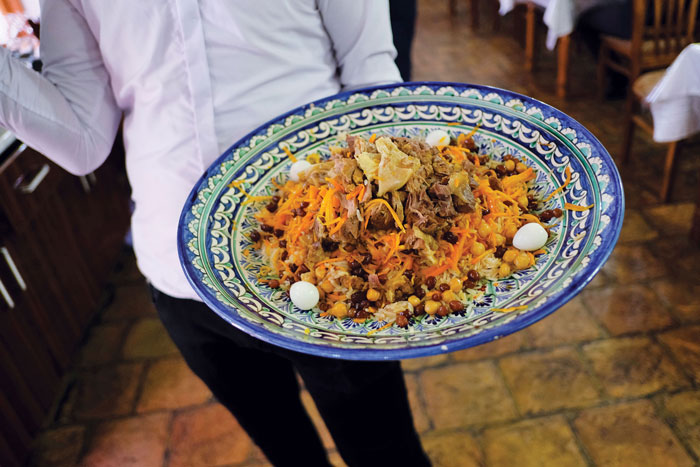 Traditional Uzbekh meals are hearty and delicious, like plov, a combination of lamb, rice, onion and carrots. Image: Getty.
We step back in time here, taking in the ancient architecture of impressive blue- and gold-covered mosques, mausoleums and madrassas (Islamic schools). In southeastern Uzbekistan, Samarkand is similarly striking, its Registan was once the largest public square in the country, filled with markets and lined with caravanserai – local inns for weary Silk Road travellers. 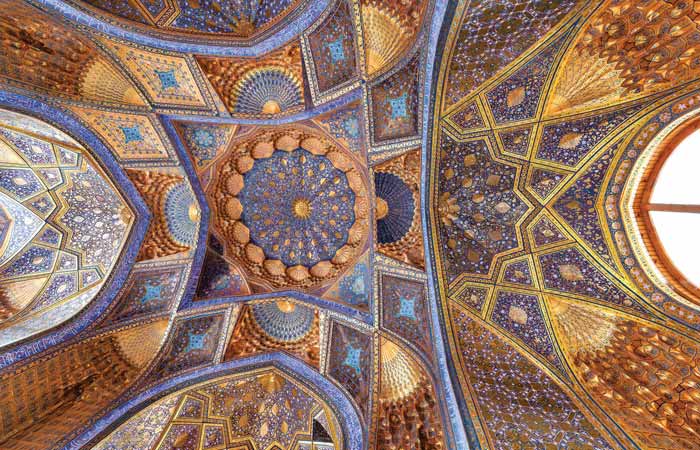 Marvel at the intricate detail of the colourful blue and gold ceiling of the Tilya Kori Madrassa in Samarkand. Image: Getty.
After Turkmenistan and Uzbekistan, the much larger Kazakhstan feels decidedly more European. Mosques give way to Russian Orthodox churches with shiny and brightly coloured exteriors, and shopping malls and pubs are dotted all over Almaty, the largest city. Nestled at the base of the snowy Zailiysky Alatau mountain range, verdant, modern Almaty is in stark contrast to the arid deserts and dunes of Turkmenistan and Uzbekistan. Also surrounding us is the distinct aroma of chocolate, wafting from the Rakhat Chocolate Factory in the city centre. We savour the sweet treat as we wander the Green Market.
Piled high with fermented horse and camel milk, nuts, fresh produce, Georgian sweets and Korean salads, it’s a taste of Central Asia and all its complexities and influences.

As a Flight Centre travel expert, Katherine Benvenuti loves travelling and exploring the path less travelled. For this life-long traveller, it's about discovering the countries that your average traveller wouldn't consider but are beautiful, scenic and deserve to have their story told.