Why You Need To See Sunrise At Angkor Wat Right Now

Why You Need To See Sunrise At Angkor Wat Right Now

Tweet
Read Time: 2.1 mins
We arrive to Angkor Wat in total darkness, unable to see anything beyond what our phone torches illuminate. We follow a guide to the base of the temple, which is a looming black silhouette in the pre-dawn light. Rather than jostle with the crowd at one of the famous reflection pools, we travel a little further around its edge and find a quiet place to sit on the grass. 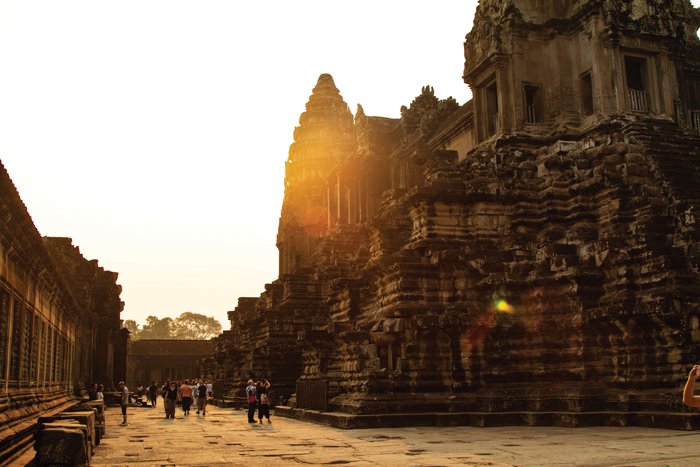 The intricate detail of the steps before you ascend to reach the final tier of the 'temple mountain. Image: Emma Russell
The darkness lifts, the sky slowly turns orange and the grand temple reveals itself little by little; dozens of palms, soaring towers, endless stairs, intricate pillars and ancient carvings – oh the carvings! Our guide quietly tells us that the now-Buddhist temple was originally designed to mimic the Hindu universe; with each level representing a different stage, and its highest peak the very centre of their cosmic world. We sit and contemplate this, such a poetic approach to what is undoubtedly a magnificent feat of engineering.

RELATED: 9 Experiences To Have In Asia

The sun finally breaks over the central tower, rays flooding the grounds of the ancient temple, illuminating everything in the most glorious golden glow. The sandstone changes colour as the light does; first a cool grey, then a rich earthy brown. It’s blackened in places, and its edges smooth, worn by millions of hands and the elements over the better part of a millennia. 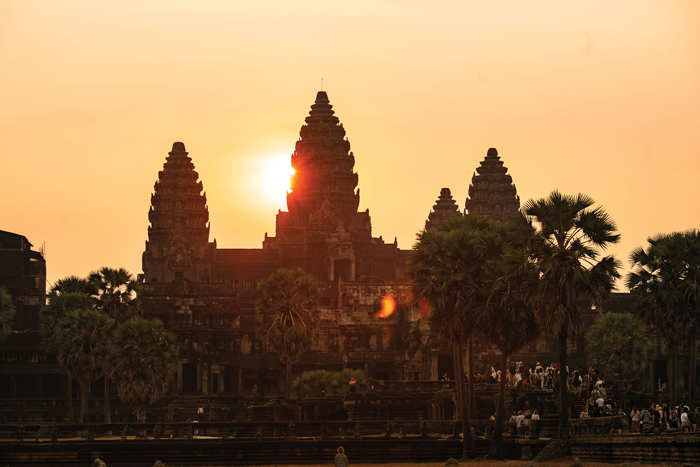 A glorious sunrise over Angkor Wat, and the entrance to what's referred to as the 'temple mountain'. Image: Emma Russell
There is a soft hum – the hushed voices of many – talking in reverent tones as they watch the scene unfolding before them. The birdsong of bright melodic calls, all totally unfamiliar, adds adding to the incredibly exotic, otherworldly atmosphere. Looking among our group, there’s a sense of deep introspection, that each and every individual is coming to terms with just how extraordinary a place and moment this is.... understanding and acknowledging how incredible it is that Angkor exists at all, let alone almost a thousand years later, in the middle of the hustle and bustle of our modern world.

As the sun gets sharper the magical reverie is broken and our group starts to stir, keen to begin our ascent, and to discover the unknown universe of Angkor Wat awaiting us.

Emma is a Senior Graphic Designer with a keen interest in historical architecture. She loves exploring wonderful old cities across the globe. On weekends you'll find her scouring local hotspots for amazing food or antiques, camping somewhere off the beaten track or taking photos of beautiful places.