Beijing's New Airport Set To Be Biggest In The World

Beijing's New Airport Set To Be Biggest In The World

Tweet
Read Time: 1.3 mins
The world’s largest airport, more than two-thirds the size of Manhattan, is set to be completed in September this year, just under five years after construction began.
Created to ease the pressure on the at-capacity Beijing Capital International Airport and spanning 700,000 sqm, the Beijing-Daxing International Airport will be home to four runways, expanding to six by 2025, then eventually seven.
Just 67km south of Beijing, a major business hub and China’s largest city, the new airport is expected to accommodate 72 million passengers per year by 2025 and more than 100 million per year when the seventh runway comes online. 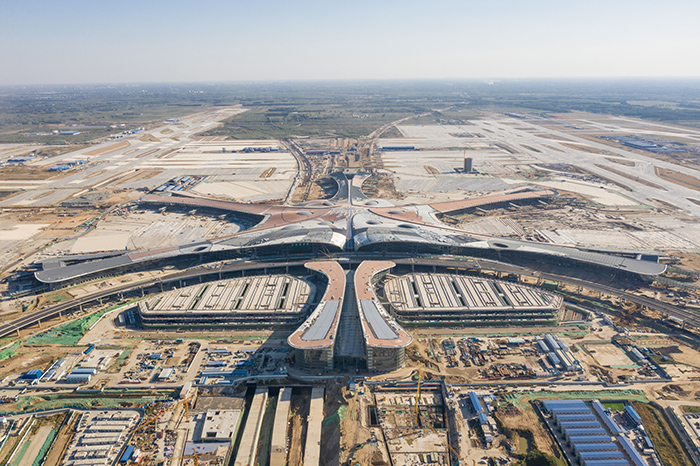 Aerial view of Beijing Daxing International Airport, which will be the world's largest and busiest on completion. Image: Getty.
In addition to commercial passengers, the airport will support the movement of more than two million tonnes of cargo and mail annually.
The terminal building, itself an architectural marvel – brainchild of the late Zaha Hadid, famed Iraqi-British architect – will have 78 gates and a number of entertainment and retail precincts plus a high speed railway and subway line connecting to Beijing.
Reportedly, Beijing-Daxing Airport will feature a raft of environment and sustainability measures such as quieter runways, an earthquake-proof terminal and short walking distances to reduce greenhouse gas emissions.
Foreign carriers currently using Beijing Capital International can choose which of the two airports they use, according to China’s aviation regulator, with China Southern, China Eastern and Beijing Capital Airline expected to make the move to the new facility.
The ambitious project has cost the Chinese government almost $12 billion so far but the airport will be on par with the Hartsfield-Jackson Atlanta International, currently the world’s largest.
business travel news China