Best Bites In The Big Apple

Best Bites In The Big Apple

Over the course of the northern summer, we're taking you on a guided tour of the best culinary destinations around the world. After tours of the Met and MoMa, a walk in Central Park and a tour of the High Line and the surrounding Chelsea galleries, you're sure to have developed an appetite. Some of the most celebrated chefs in the world are plying their trade in New York, so let's take a bite out of that Big Apple.

The city that never sleeps has something for everyone, and that is even truer for epicureans.

New York is one of three American cities, along with Chicago and San Francisco, where the world famous Michelin Guide has doled out its vaunted stars. This shouldn't come as a shock to anyone, for although the city can't boast of having as many stars as Paris or Tokyo, it does have an increasingly respected culinary community that gastronomes the world over dream of discovering. 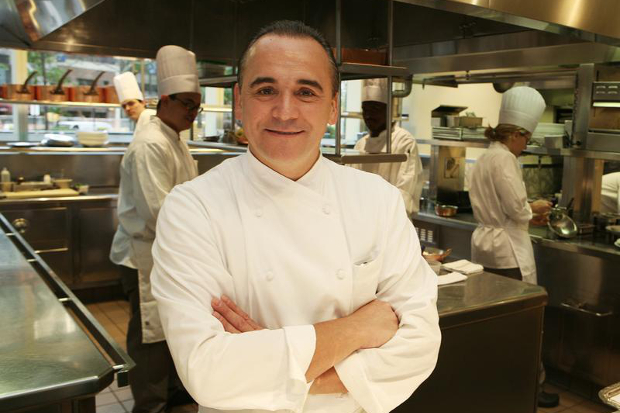 With more talented chefs per square foot than almost any other place in the world, where to start?

Well, if you want to get off the beaten path, all the while staying hip to New York's ever evolving scene, take a trip across the Brooklyn Bridge. The city's most populated borough has enjoyed a renaissance of late and the proof lies in the words of some of the nation's top food critics.

You'll want to head over to Blanca, where chef Carlo Mirarchi serves dinner Wednesday to Saturday, strictly by reservation and for parties up to four only.

The restaurant clinched double stars last October so reserving 30 days out is almost a necessity. Sitting at a counter facing the burners, you'll have a prime view to appreciate the chef's minimalist cuisine.

Should you be in the mood for a little bit of history while dining, opt instead for a meal at the River Café. Nestled at the foot of the Brooklyn Bridge since 1977, this New York institution is heading back towards its glory days after having suffered through the aftermath of Hurricane Sandy in October 2012.

The Return Of French Cuisine To NYC

At one point in the 1990s, as many as eight of the best restaurants in New York City were French.

After a decade of fusion cuisine and countless reinterpretations of the burger, it seems that French food is back in the spotlight. The love affair between New Yorkers and French culinary geniuses is nowhere more evident than in the lines of people snaking down the Soho streets waiting for the chance to bite into one of Dominique Ansel's cronuts, the doughnut/croissant hybrid which landed him the honour of Best Bakery of 2012.

While that may hit the spot for a snack between attractions, for the real deal of French gastronomy in the city, you'll want to reserve with Jean-Georges Vongerichten, the Alsatian-born chef who has created an empire based in New York.

At his eponymous restaurant, located in the Trump Hotel near Columbus Circle, overlooking Central Park, the chef presents diners with the culinary delicacies that have earned him three stars from Michelin.

If Jean-Georges isn't exactly your speed, perhaps a visit to Le Bernardin is in order. Eric Ripert is one of the most talented chefs in the world, and in his temple to the sea on West 51st, the chef, whose origins lie in the south of France, delights guests to the level of three Michelin stars and an impressive 18th place on the list of The World's 50 Best Restaurants.

Next up, Daniel Boulud. Although the native of France's gastronomy capital of Lyon has recently been downgraded to "only" two stars by Michelin, a dinner at his palatial restaurant on Park Avenue is nonetheless an essential experience for those who want the best of New York.

The superstar chef's New York empire also includes Cafe Boulud, on the Upper East Side as well, and Bar Boulud, across from Lincoln Center, a more casual dining spot that serves the signature terrines and pâtés of famed Parisian charcutier Gilles Verot, along with a complete menu of seasonal French bistro cooking.

And to really drive home how much a part of New York living French cuisine has become, sometimes the man behind the burners isn't even French.

Emulating his mentors Paul Bocuse and Joël Robuchon, David Bouley is a Connecticut-born chef whose eponymous restaurant in Tribeca was voted by Zagat in 2013 as the best restaurant out of 111 in the neighbourhood and the 3rd best in the city overall.