Passengers are usually advised to adopt the brace position when an aircraft is required to make an emergency landing on land or on water.

It involves putting your feet and knees together, with your feet firmly on the floor, and placing your head against the surface it is most likely to strike – usually the seat in front.

Numerous theories have been proposed about the purpose of the procedure. Some have suggested that it is only useful for preserving passengers’ teeth, allowing for easier identification (using dental records) after a crash.

Another is that the position actually increases the chance of death, by breaking your neck, and is subsequently recommended by airlines to reduce medical insurance costs, or, to the more morbid, to ensure a quick and painless death. 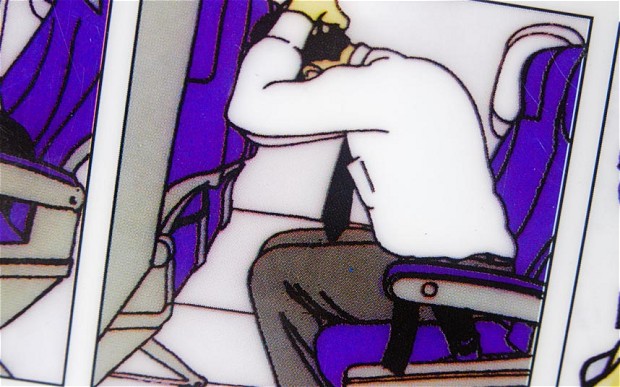 While ongoing compensation payments to a seriously injured passenger may cost more than a single payment to the relatives of a deceased one, such theories have been widely debunked by research.

"Flying is one of the safest forms of transport,” he said. “The need to use the brace position is incredibly rare. However, it is a globally recognised safety technique.

“The last major refinement to the brace position in Britain was introduced following research into cabin safety after the Kegworth crash in 1989, which studied the resulting injuries from those who did and did not adopt the brace position.”

The Kegworth disaster, which occurred on January 8, 1989, resulted in the deaths of 47 of the 126 passengers on board, while 74 were seriously injured. New brace procedures were issued to airlines in 1993, following the research, which was carried out by the University of Nottingham and the consultancy company Hawtal Whiting Structures.

On its website, the Australian Civil Aviation Authority cites another incident in which a twin-engine aircraft crashed with 16 passengers on board. Most were sleeping at the time of the crash, it says, except one, who woke, adopted the brace position, and was the only survivor.

The absence of fatalities on board the US Airways Flight 1549, which landed in the Hudson River, has also been attributed to the position.

The Discovery Channel's Mythbusters series has also looked at the issue. Using crash test dummies and sensors, it was able to prove that the brace position would significantly improve your chances of avoiding serious injury during a plane crash.

More recently, a 2012 Channel 4 programme saw a real passenger jet deliberately crashed into the Sonoran Desert in Mexico. Three dummies on board were arranged in various positions: one in the classic “brace” position and with a seat belt fastened, one with just the seat belt fastened, and a third with neither.

"To adopt the brace position passengers should place their feet and knees together with their feet firmly on the floor,” added Mr Allright. “Feet should be flat or on the balls of their feet, and further back than the knees. In the event of an impact, this position helps prevent shins and legs being broken against the base of the seat in front, which would obviously hinder evacuation.

"Passengers should bend as far forward as possible. If it's in reach, they should rest their head against the seat in front, with hands placed on the back of their head. Hands should be placed on top of one another (not with fingers interlocked), elbows should be tucked in to their sides. The head should be as far below the top of the seats as possible. This position prevents flailing of the arms, minimises the risk of broken fingers and protects the head from moving objects.”

The position varies slightly in the US. Rather than placing hands on the back of the head, passengers are advised to place them on top of the seat in front, or to hold their ankles.