Japan’s flagship carrier ANA has unveiled the first of their three Star Wars-themed jets, with the fuselage of a Boeing 787 Dreamliner repainted in the image of the world’s favourite non-speaking, beeping Android, R2-D2.

For Star Wars fans travelling between Japan and the US, Europe, Australia and Asia this northern autumn, here are the numbers and the date to note: On October 18, the R2-D2 ANA jet will begin service on international routes, beginning with flight NH116, between Tokyo’s Haneda airport and Vancouver.

The aircraft – a Dreamliner 787-9 – will then expand to other routes that include Tokyo to Seattle, San Jose, Paris, Brussels, Munich, Sydney, Beijing and Jakarta. 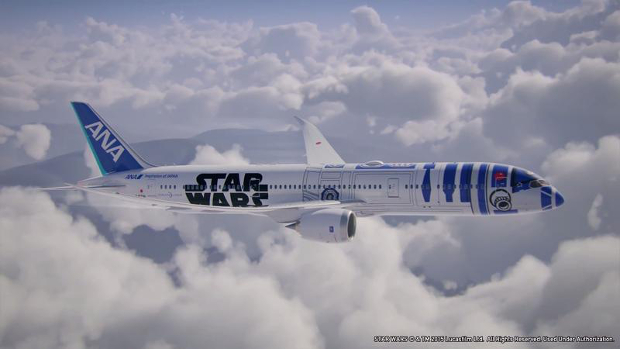 In addition to blasting off into, albeit, subspace, on an R2-D2 jet, passengers will live out a uniquely Star Wars experience aboard the aircraft, which will be decked out nose to tail in themed decorations, from headrest covers, paper napkins, cups, and in-flight entertainment.

In fact, for the first time, all six Star Wars films will be available on board.

Over the weekend, the newly painted R2-D2 jet made its first public appearance in Seattle, rolling out of the hangar to the Star Wars soundtrack, accompanied by a small army of protective Stormtroopers.

Two additional planes decorated with BB-8, a new character from the upcoming "Star Wars: The Force Awakens" film due out in December, and a Star Wars-themed plane featuring characters on either side of the fuselage, will also enter service. 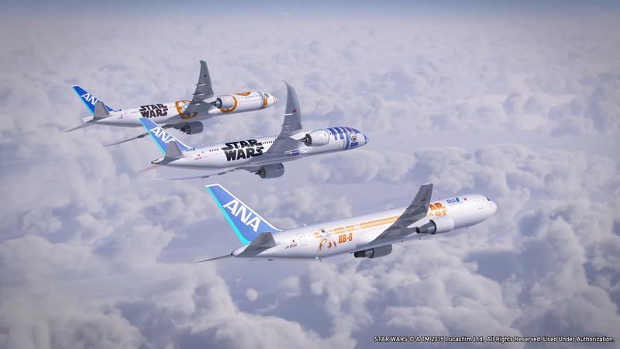 The BB-8 jet is scheduled to launch in spring, serving international routes primarily between Japan and North America, while the Star Wars jet will take to the skies in November, flying domestic routes within Japan.

Though ANA’s partnership with Disney’s Star Wars franchise may go down in the books as one of the most epic, it’s definitely not the first collaboration of its kind.

Air New Zealand has served as the official carrier for The Lord of the Rings and The Hobbit, emblazoning their aircraft with hobbits, heroes and dragons, while Taiwanese airline Eva has Hello Kitty aircraft in circulation around the world.