News of the world’s first hotel staffed by robots, which opened last month near Nagasaki, Japan (where else?), immediately went viral, but few of the reports actually involved a visit. I went along last week to see if Henn-na hotel lived up to the hype.

I arrive at 2.55pm. All is quiet. Behind reception is a motionless but lifelike girl robot wearing a cream jacket and a smirk. She has a sign saying “only Japanese”, so I approach another robot, this one designed, bizarrely, to look like a velociraptor and sporting a bow tie and a bellhop hat. 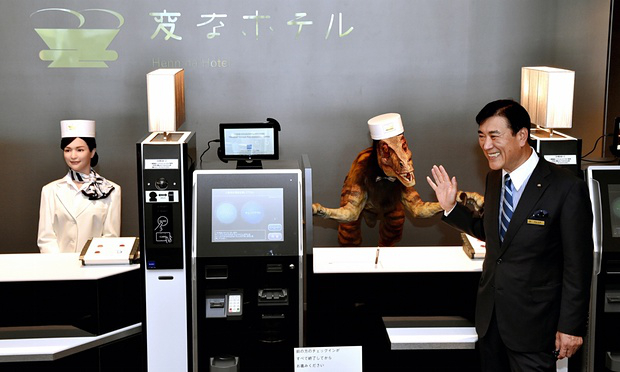 I say hello. Nothing. I wave and he stares past me, his arms outstretched but unmoving.

“I’d like to check in please,” I shout, wondering if the robots are voice-activated. A door opens to the right and a real live human in a black T-shirt appears. “Check-in is 3pm” he says, and goes back into his room.

Robots are taking off in Japan and several companies manufacture them

In April the Tokyo branch of Bank of Tokyo-Mitsubishi put a humanoid robot on reception; Nestlé is investing in robots to sell coffee makers in stores across the country; and robots guide visitors round the capital’s National Museum of Emerging Science and Innovation.

The hotel’s owner, Hideo Sawada, says he wants to make this “the most efficient hotel in the world” by reducing manpower and having 90 per cent of staff robotic.

The hotel is in the Huis Ten Bosch theme park in Sasebo, Nagasaki. Designed to resemble the Netherlands, the park is a sort of Dutch Disneyland, with gardens, windmills and tea shops – and so far most hotel guests have been Japanese families visiting the park. 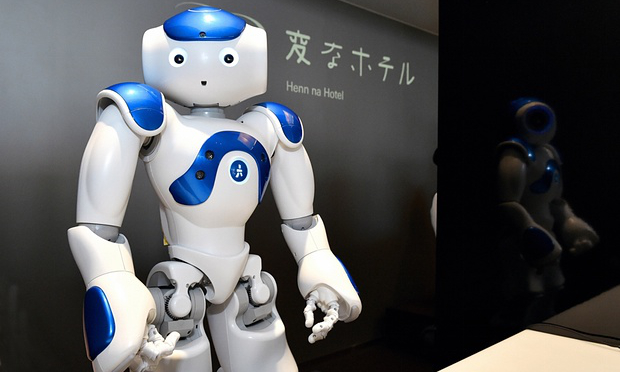 The hotel itself is a beautifully designed modernist property, with techy additions such as aircon that adjusts to guests’ body temperature.

At 3pm the velociraptor jerks to life and says, in an American accent, “Welcome to the Henn-na hotel. If you want to check in, press one.” I start tapping the screen but the man in black appears again and asks for my passport, leaving the robot to fall into a state of inertia. How disappointing.

The hotel’s other robots include a giant mechanical arm in a glass case that stores luggage in individual drawers for ¥500 (A$5.50). There’s also a foot-high “concierge” who explains breakfast times and locations (only in Japanese) and orders taxis.

Robot “porters” are two rechargeable luggage trolleys – but only for residents of one luxury wing.

Using facial recognition software, I let myself into my room and find, on my bedside table, Chu-ri-chan, a cute little electronic creature. She will switch on the lights and offer weather forecasts and wake-up calls.

She’ll also perk up after being silent for an hour and scare the life out of you. Robots may be the future, but for hotel hospitality, you still can’t beat the human touch.

This article was written by Monisha Rajesh from The Guardian and was legally licensed through the NewsCred publisher network.