Tom Fiore knows what it's like to sit in a taxi for as long as two agonising hours, over bridges or through a tunnel, to travel a mere 13 kilometres from midtown Manhattan to LaGuardia Airport in Queens.

The salesman who makes that trek about twice a month is among legions of travellers applauding what they see as a long overdue proposal from New York Governor. Andrew Cuomo: build a rail link connecting the city to LaGuardia.

"This is a very difficult place to get to," Fiore said as he typed on a laptop while waiting for his flight. "I think it would save a measure of time."

LaGuardia is one of just a few airports in major American cities not served by some sort of rail service. Neighbouring John F. Kennedy and Newark have it, and projects are underway at Washington Dulles, Los Angeles and Denver. 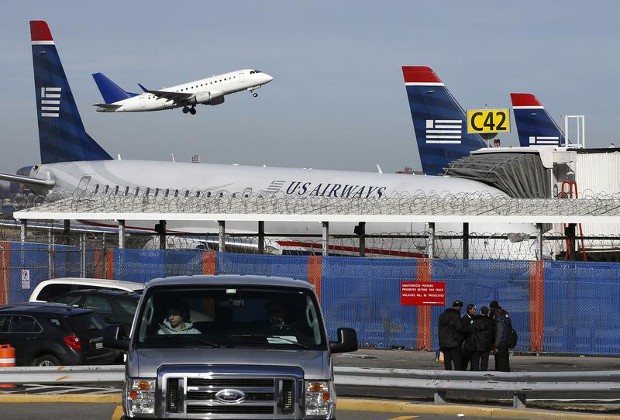 Cuomo's $450 million proposal, made on the eve of his State of the State address, follows his announcement last year for a $3.6 billion (A$4.7 billion) renovation of the decrepit LaGuardia — famously dubbed by Vice President Joe Biden as a "third-world" facility.

The plan calls for an elevated AirTrain that would connect the airport, located along Flushing Bay, with a busy transit hub 2.4 kilometres away. The hub, with access to the city's subway and commuter railroads, is near Citi Field, home of baseball's Mets, and the Billie Jean King National Tennis Center, home of the US Open.

"You can't get to LaGuardia by train. That really is inexcusable and that is going to change," Cuomo said in announcing the plan.

Because the 2.4-kilometre project would be built mostly along the Grand Central Parkway and not in residential neighbourhoods, Cuomo does not expect much local opposition.

The project would be managed by the Port Authority of New York and New Jersey, which runs the area's major airports, with coordination by the Metropolitan Transportation Authority, which operates subway, bus and commuter railroads.

Cuomo said it would be financed through a combination of existing state funds, Port Authority funds, and a share of the $5 billion generated from settlements of alleged bank misconduct.

Aides say it could be completed within five years once work begins.

A 2014 Port Authority survey found that 75 per cent of those travelling to LaGuardia from Manhattan took either taxis or private town cars. Only about seven per cent used bus services.

Approximately six million people used the Kennedy AirTrain out of 50.4 million passengers in 2013.

At Newark Liberty Airport, 2.3 million people used the AirTrain, out of a total of 35 million passengers, according to Port Authority statistics.

Nicole Gelinas, a senior fellow at the Manhattan Institute, a conservative think tank, questioned how the project would be financed. She said the MTA, which is included in the plans, already has commitments to complete a Manhattan subway project and a new rail line bringing the Long Island Rail Road to Grand Central Terminal.

That's in addition to the Port Authority's LaGuardia renovation, which includes a complete reconstruction of the facility's Central Terminal Building. Some preliminary work, including the demolition of two old hangars and parking garage improvements, have already started.

"We don't have money to start yet another infrastructure project when we have not figured out how to pay for what we are already doing," Gelinas said. "I suppose it's better than nothing, but it's not a great aspiration."

Travellers at LaGuardia, however, were quick to embrace the governor's proposal.

"I hope they can get it off the ground, that there won't be cost over runs," said James Brown, a security worker who lives in nearby Woodside. "I think that it's a good idea."

Nicholas Christensen of Denmark said he had just paid about $80, including tolls, for a cab ride with a friend to the airport from Manhattan. "I've never been to an airport that don't have train connection, except for one," he said in broken English. "I think it would alleviate traffic problems."

This article was written by Frank Eltman from The Associated Press and was legally licensed through the NewsCred publisher network.