Latest Contraption To Help You Sleep In Economy

Latest Contraption To Help You Sleep In Economy

It can be the most frustrating element of any flight – that desperate bid to grab any sort of sleep from the unrestful confines of an economy class seat.

There are, of course, always moments when you are close to drifting off – only for the flimsy pillow behind your head to slip from position, a member of crew to bang your leg, or your neighbour to decide that this is the moment to ask you to move so they can enjoy their ninth bathroom break.

No contraption – apart from an immediate transfer to the comforts of business or first class – is likely to solve the latter two issues. But frequent attempts are made to resolve the former.

The latest invention comes from a plausible source. Boeing. The Seattle-based aircraft manufacturer usually busies itself with the raw nuts and hard bolts of planes but has turned its attentions to a sleep-assistance device for passengers in the least expensive cabin, with what is described as a “Transport Vehicle Upright Sleep Support System”.

The company has filed a patent for this unusual item – which merges a cushion, a backpack and a pillow into a device which can support a passenger’s head and chest. 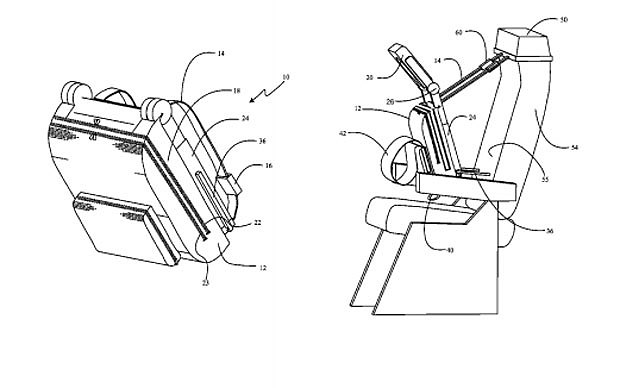 Sketches supporting the application, along with mock-ups produced by the website PatentYogi, demonstrate that it can be strapped to the head-rest at the back of a seat, allowing a traveller to lean forward and rest their weight against it in a bid to enjoy a little slumber on a long-haul service – with the cushion supporting the chest and a pillow (with a hole to leave space for breathing) taking care of the head and face.

The patent application describes the design in detail, outlining the device as “an upright sleep support system [which] incorporates a head cushion having a face relief aperture to receive the eyes, nose, mouth and chin of a passenger placing his or her face against the head cushion with a hinged support structure for angular adjustment.”

The “system” also, the explanation continues, has “sleeves that open in front to support the passenger’s arms, and a chest cushion on the back of the device.”

Boeing is not commenting beyond the patent application, and the contraption may never see the light of day – but it has the advantage of looking a little less ridiculous than similar options which have been marketed in the same field.

The device would not unduly hinder other passengers – unlike the “b-tourist” band, which emerged last year.

Created by two Israeli design students, it involves a burst of elasticated fabric which can be stretched between two seats to form a private space of sorts – as well as a taut surface where a sleeping figure can rest their head. The obvious flaw is that the item needs to wrap around the seat to the rear, obscuring the television screen to the undoubted fury of the passenger behind – while blocking the movement of other passengers in the row. And, many might say, looking not a little laughable.

Other valiant attempts to provide an economy-class sleep solution include the “Ostrich Pillow”, a squishy orb which fits over the head, allowing – theoretically – for sleep against any flat surface. It covers most of the face, preventing light from disturbing the eyes – while leaving an all-important mouth gap to let the wearer breathe.

Then there is the cumbersomely named “RelaxALLY” headband – an item not dissimilar to Boeing’s new idea, dreamed up by Finnish designers, where a small strap, which runs around the headrest, holds a face mask in place.