There's no need to resign yourself to the notion that if you hop on a plane, you're going to catch the dreaded lurgy. Like working in an office, using public transport or pretty much any activity that involves coming into contact with other human beings, if you take some precautions, you should be right as rain.

Contrary to popular belief, airplanes are not breeding grounds for colds and flus. In reality, they're no different to any other enclosed space like shopping centres or cinemas.

Air filters on planes these days are second-to-none and airborne viruses aren't your main concern; it's actually the low humidity levels in the cabin that increase your chances of bugging out - the air dries our mucus, aka nature's defense system, giving germs a better chance of taking us down.

If you're going to pick up a bug, it's likely going to be from direct contact with someone affected (maybe don't shake the hand of your red-nosed neighbour), or on surfaces such as bathrooms or tray tables. Tip #1: Keep your hands clean and away from your eyes, mouth and nose. Those tiny bottles of instant hand sanitizer are your best weapon.

There are so many misconceptions when it comes to 'getting sick', including not knowing the difference between a cold (that 'cloudy head' feeling coupled with a runny nose, sneezing and coughing) and the flu (all of the above symptoms plus a fever and achiness, which can stick with you for a lot longer); and not staying home during contagious periods (for the flu, you're in the clear about 24 hours after your fever disappears).

Here are some of the best ways you can avoid the dreaded plane cold with steps to take both before you fly and during your journey. 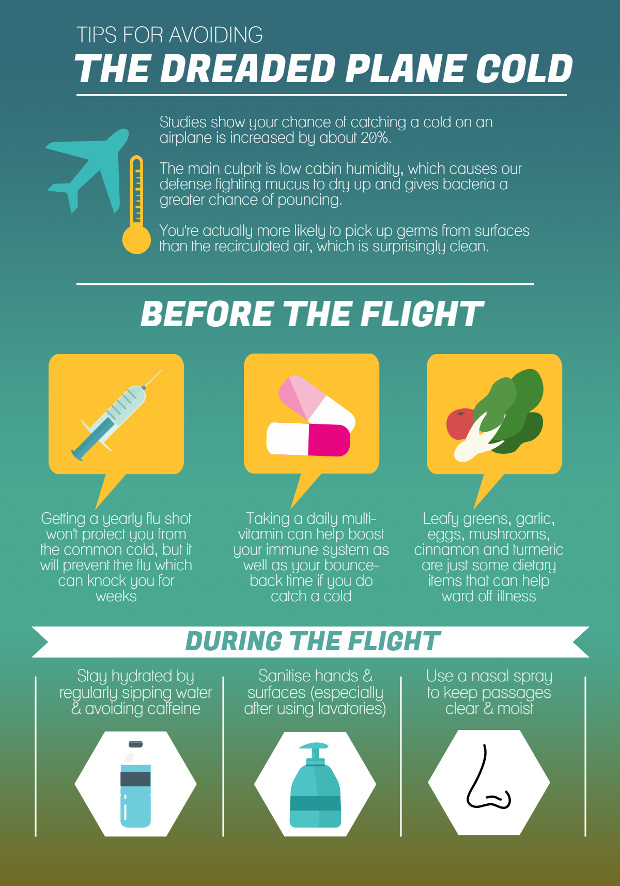