Travel to and from Brisbane is about to get better for dedicated Qantas flyers. The airline has announced plans to expand their lounge and terminal facilities as part of their quest to improve the passenger experience in the ' River City'. The multi-million dollar project is set to begin before the end of the year with completion due in stages throughout 2016 and early 2017. 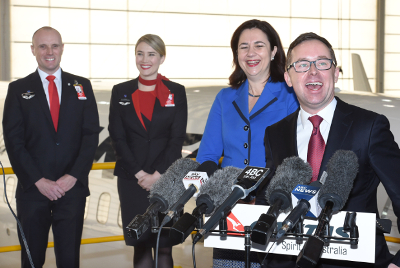 Across the domestic terminal, a complete refurbishment of the existing Qantas Club will not only see redesigned interiors but a 30 per cent increase in capacity. The plans also include the construction of a brand new Business Lounge and Chairmans Lounge.

The international terminal will not be left out, with the existing First and Business Lounges being redesigned into a single lounge experience. This direction is in-keeping with the award winning designs of the Singapore and Hong Kong projects that were completed in 2013 and 14 respectively. The new layout will also increase the amount of space dedicated to passenger comfort. This includes expanded dining, working and relaxation areas.

CEO Alan Joyce, joined by Queensland Premier Annastacia Palaszczuk, made the announcement last week at the Qantas Brisbane Heavy Maintenance Facility, saying, "During the past two years we have invested in new lounges, upgrades to our A330 aircraft and rolled out more in-flight entertainment options than ever before.

"Brisbane is a crucial hub providing connections between our major domestic routes and services into regional areas as well as international flights to Los Angeles, Singapore, Hong Kong and, as of a few weeks ago, daily flights to Tokyo.

"Queensland is where it all began for Qantas and we are very proud to maintain such a strong presence and commitment after almost 95 years of operations."

The Brisbane lounge improvements will be accompanied by a sweep of upgrades being made to Qantas's fleet of 737 aircraft. This includes upgraded entertainment systems across the remainder of the fleet and Q-streaming entertainment that allows passengers to stream 400 hours of content to their own personal devices. It will also see the addition of an extra row of economy seats thanks to the reconfigured rear galley and lavatories.