We’ve all seen them – or perhaps we are them – the people boarding the plane or trying to check in with excessive carry-on luggage. They’ll have a bag on wheels AND a backpack. Laptop cases, plastic bags and satchels dangle off both arms.

They’ll board early and fill the overhead lockers with their jackets and backpacks, their stripy hessian bags and boxes of donuts. And you, you with your elegant little carry-on, will have to stow your bag in the hold or squash it under the seat in front.

William Boot, the protagonist of Evelyn Waugh’s brilliant novel Scoop, was an early prototype of the excess baggage passenger. Boot, an accidental foreign correspondent, is overzealous with his packing. He just can’t keep his baggage down (he packs cleft sticks and canoes), which requires servants to travel around behind him to help him carry it all.

What motivates today’s Boots to clog up the precious space in the overhead lockers? Are they trying to circumvent the baggage fees of budget airlines, or perhaps they’re traumatised by past experiences of baggage lost in transit, or maybe they’re just incapable of packing lightly?

Whatever the reason, the airline industry this week announced they would be re-examining their requirements for carry-on luggage, with the dimensions for many airlines shrinking.

Australian low-cost carriers Jetstar and Tigerair enforce strict 7kg limits on carry-on. If you are over, expect to pay a penalty per kilogram.

Tiger told the Sydney Morning Herald last year they “had been encouraging passengers to adhere to the baggage allowances since the start of the year by positioning extra staff at departure gates to issue warnings to people who exceeded the carry-on limits”.

In my experience, these staff will point you towards the nearest bin where you can turf your excess baggage if you’re not prepared to pay the fees.

While it’s easy to moan about the baggage police, there are ways around the new, smaller cabin baggage dimensions. Here are my top tips:

It’s the simplest, yet most difficult commandment. Packing light is good in theory, but it is only human to plan for every contingency.

Let’s say you’re packing for a holiday in Noosa. It’ll be sunny. You’ll only need a couple of pairs of short and some T-shirts, swimwear, undies, something neat for dinner and some toiletries. But what if it rains? Or if you wake up and actually feel like wearing the blue dress, not the red dress, but have left the blue dress at home? And what about the three volumes of Knausgaard that you’d been planning to read on the beach?

The person who packs lightly is decisive. They don’t give a toss if the people of Noosa see them in the same outfit four days running. Or if they have nothing to read. All they need is a change of underwear and maybe an extra pair of shoes. But how to get to that cool, confident place where you are a light packer?

British writer AA Gill reckons you have to be posh and rich to have the right mindset to pack light.

As he put it in one of his travel columns: “One of the greatest mysteries of a traveller’s life is why is it that the amount of luggage carried is in inverse proportion to the net worth of the traveller. The richest people travel with the least … Tourist [economy class] is made of families and students shoving vast suitcases, like slaves building a Samsonite pyramid.”

Why? “The poor travel with everything, because that’s all they own. The rich man gets what he needs at the other end.”

So stop being poor and frightened, OK? 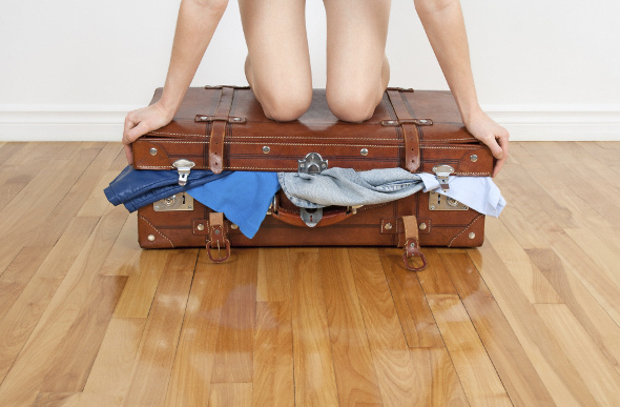 They can’t stop you from wearing four jumpers, a skirt over jeans, seven scarves and five T-shirts. You might have trouble walking, may not fit in your seat and the sweatiness from all the layers will make you a prime candidate for the “explosives test” – but hey you have a teeny-tiny backpack that fits neatly under your seat. You are International Air Transport Association approved.

Another alternative is to wear a big jacket with multiple pockets and carry everything you need on you (ie scrunch up your clothes into balls and put them in your pocket).

It’s 1979 and American reporter Joan Didion is going on the road. Her packing list, published in her collection of essays, The White Album, has become legendary. Didion kept her packing list taped inside her closet door for when she had to leave home at a moment’s notice.

“The list enabled me to pack, without thinking, for any piece I was likely to do. Notice the deliberate anonymity of costume: in a skirt, a leotard and stockings, I could pass on either side of the culture. Notice the mohair throw for trunk-line flights (ie no blankets) and for the motel room in which the air conditioning could not be turned off. Notice the bourbon for the same motel room,” wrote Didion.

There are Tumblrs devoted to her list, and recently an American Elle reporter packed like Didion for a trip to LA. The result? “All in all, following Joan Didion’s packing list [below] was difficult – to say the least. The lack of options, while refreshing (and in line with my yearning for a uniform in high school), made me feel decidedly naked the entire weekend.” (Didion did not include any underwear on her list).

Didion’s carry-on – apart from the typewriter – is light enough to fulfil the new requirements as laid down by the International Air Transport Association.

Even better, these days you can substitute typewriter, two legal pads and pens and files for a light laptop. Not a writer? Even better. Replace her kit with a Kindle and your carry-on will be even lighter. You can use the extra room to pack underpants.

If you’re a guy, ditch the leotards for T-shirts, pack two pairs of trousers, one shirt and a pair of shorts.

This article was written by Brigid Delaney from The Guardian and was legally licensed through the NewsCred publisher network.