Air passengers in the 21st century are accustomed to a relative lack of space when it comes to journeys in the skies - especially if, like the vast majority, they are travelling in economy class.

However, with developments in the aviation industry set to deliver a raft of updated aircraft in the next two years - and carriers keen to fit in even more paying customers - we may soon find that room to manoeuvre at 36,000ft is an ever more outmoded concept.

The two main aircraft manufacturers, Boeing and Airbus, are labouring away at fresh models which will reconfigure the traditional cabin, mainly by featuring more seats.

Both the Boeing 737 MAX (due to enter service in 2017) and the Airbus A320neo (set to make its debut in the later stages of 2016) will look to slot as much humanity as possible into the available space, putting an added squeeze on short-haul travellers in particular.

Last month, Airbus received permission from the European Aviation Safety Agency (EASA) to cram an extra 15 seats into the A320neo, raising its capacity from the planned 180 seats to an even denser 195.

More intimate, though, will be the Boeing 737 MAX 200 - the catalyst for which has been Europe’s biggest low-cost airline. Ryanair placing a £7.5billion order for 100 examples of Boeing’s new toy last December - with an option for a further 100 planes at a future date

But the Irish carrier’s custom came with a specific request - that the 189 seats on the blueprint for the 737 MAX be increased to the round figure of 200. Boeing responded by custom-creating a special model, the 737 MAX 200 (the “200” being a reference to that boosted number of seats) - with the initial delivery pencilled in for 2019.

Ryanair CEO Michael O’Leary was on typically forthright form when he announced the order last September, describing 200 seats as “the sweet spot” for budget airlines.

“It means that we are going to expand and grow very strongly in Europe, both in new markets and in going in and taking traffic away from incumbent carriers,” he said.

“I hope it will hasten in an era of a new price war in Europe over the next 10 years.”

Mr O’Leary also revealed that the extra capacity on the Boeing 737 MAX 200 will generate an extra €1million (A$1.35 million) in revenue per plane per year. 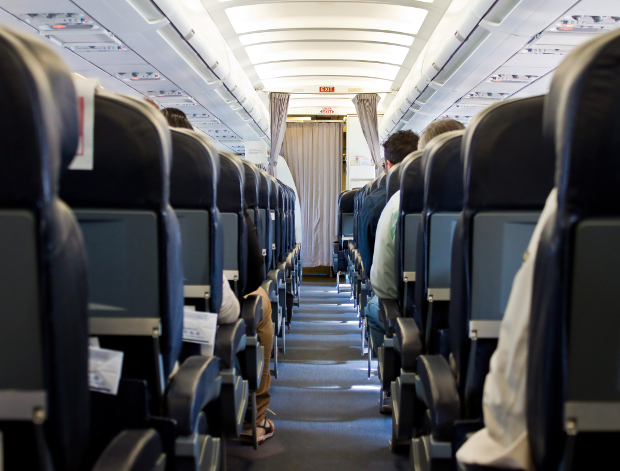 While the precise lay-outs for the aircraft are still under wraps, the extra capacity on both the Boeing 737 MAX 200 and the Airbus A320neo will come from maximising cabin space.

The Ryanair Boeing 737 is set to feature smaller toilets, where one wall of the cubicle is deliberately curved to accommodate the backs of the seats on one side – while kitchen galley size (which is less of a concern on “budget” European flights where the meal service tends to be sandwiches and cold snacks ordered from a small menu at extra cost) - will also be reduced.

Nonetheless, “seat pitch” - the space between your seat and the same point on the chair in front - will still be affected.

The expanded capacity on the standard Boeing 737 MAX means that the design includes an extra exit door to assist passenger movement - and an extra two on the Ryanair model.

Although this “pack-them-in” strategy will result in more attractive balance sheets for airlines, the profits will come at the expense of economy-class passengers, who already feel that they are treated like cattle.

Michael O’Leary has also revealed that the Ryanair incarnation of the Boeing 737 MAX will use “slim” seating - although regular customers of the airline may suggest that the carrier’s facilities already qualify for this rather flattering description.

A survey by Business Traveller in 2012 listed Ryanair’s seats as the tightest offered by 32 major airlines - at 16 inches. The same figures showed that British Airways economy seats can be as wide as 18 inches, with Virgin Atlantic stretching to 19.

Of course, airlines could argue that cramped seating conditions are not entirely their fault - and that passengers are as much to blame.

A 2012 report by CNN revealed that, where the average width of the American posterior in the Sixties was 14 inches, it has now, in the second decade of the 21st century, crept up to a more generous 15 inches.

The Boeing 737 MAX 200 is, however, unlikely to play host to an unusual item floating around drawing boards at Boeing’s headquarters. The firm has filed a patent for what is described as a “Transport Vehicle Upright Sleep Support System” - a device which would help economy class passengers to doze off while seated.

Effectively a pillow with a hole for breathing, it could be attached to the rear of the chair in front - cradling the head and chest if a traveller leans forward in a bid to enjoy some rest. It will be no match for the flat beds which give first- and business-class passengers a full night’s slumber - but it may be an answer to the issue of sleeplessness in less luxurious parts of the plane.

However, the device would be most useful on long-haul flights. And while Ryanair has stated its intention to begin services from Europe to America within the next decade, the Boeing 737 MAX 200 will not have the distance range to cross the Atlantic.

There is more to the respective developments of the A320neo and the Boeing 737 MAX 200 than a simple attempt to create modern aircraft in a competitive market. The race is part of the wider - and frequently bitter - rivalry between Seattle-based Boeing and Toulouse-based Airbus, a fractious “relationship” which has led to angry talk of illegal subsidies and clandestine state assistance, and appeals to the World Trade Organisation.

Airbus has been vocal about its opposite number’s current work, saying that the two extra doors on the Boeing 737 MAX 200 will increase the weight of the aircraft and therefore reduce its fuel efficiency - while also suggesting that the rush to crowbar in more bodies will mean a noticeable reduction in the quality of in-flight service, with three of the standard eight galley trolleys used to offer food, drink and duty-free sales needing to be removed from the plane to accommodate the added seating.

“Even low-cost carriers need more [trolleys] than that if they are serious about on-board sales and ancillary revenues,” Airbus spokeswoman Mary Anne Greczyn told Reuters.

Boeing has contented itself with defending its own product.

“The 737 MAX 200 is the perfect fit for Ryanair,” said, Ray Conner, CEO of Boeing Commercial Airplanes, at September’s launch. “It will provide improved efficiencies, 20 per cent lower emissions, increased revenues and a high level of passenger comfort.”

Shrewd observers may note that a “high level of passenger comfort” is unquantifiable, and largely down to the viewpoint of the individual traveller.

But whatever the ramifications for the paying clientele in the average economy-class cabin, passengers are unlikely to be able to avoid this new generation of aircraft. Airbus received over 2,000 orders for the A320neo in the two years following its launch in December 2010 – with Qatar Airways putting in a request for 50 of the planes in November 2011. Boeing had had over 2,500 orders for the 737 MAX by the end of 2014.