See Where You Are With A Morning Run

See Where You Are With A Morning Run

It's hard to stick to fitness goals on a business trip. Jet lag, dining out and packed schedules can disrupt diets, sleep and exercise routines. To make things worse, you can be in a beautiful city with no time for sightseeing.

That's why so many business travelers treasure a morning run.

Sure, you can hit the hotel gym, but a morning run can help reset your body clock while offering a look at local landmarks.

Here are some strategies for planning a jog on a business trip in an unfamiliar destination.

Most hotels can provide maps with easy-to-follow, safe routes.

All Westin hotels have a gear-lending program in partnership with New Balance.

For $5, guests can borrow shorts, a T-shirt and New Balance shoes, plus a pair of socks to keep. The gear is especially handy if you're traveling light and didn't pack sneakers. (The borrowed sneakers are lined with fresh, disposable insoles.)

And at 51 Westin properties, running concierges are available to lead morning runs twice a week for guests who sign up the night before. 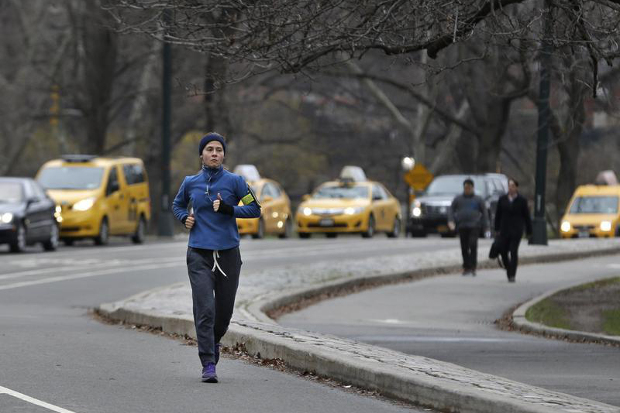 "Our concierges are not necessarily running experts; their background is not in coaching runners, but they're passionate about running and they have a unique knowledge of the city they run in all the time," explained Christopher Heuisler, who heads the RunWestin program.

In New York, Kimpton's INK 48 hotel offers a runner's kit with a map of the Hudson River running path, a preloaded iPod Shuffle with headphones, a sports watch, running belt with water bottle, and an energy bar and sports drink upon return.

In Miami, every room at the Conrad has a jogging route map with recommended runs to Key Biscayne, Coconut Grove and Brickell Key. Radisson Blu's US hotels offer BluRoutes. Some hotels, like The James Chicago, can arrange a personalised guided running tour that shows off the city.

Mary Pierik, a cruise director and tour leader with Tauck, likes to run by the water wherever she is. "Hard to get lost if you stay by the river, lake or pond," she said.

She also loves hilly terrain, so in Europe, she heads for castles, forts or churches "as they are usually built on top of a hill, are easy to see from a distance, and usually are well signed." In addition, Pierik checks with locals to ensure she's chosen a safe route, and always lets someone know she's heading out and when she expects to return.

Jeff Wilson, host of the PBS show "Real Rail Adventures," prefers hotels located near rail trails "like the Katy Trail in Dallas or the Keystone or West Papio Trails in Omaha (Nebraska). Nearly every large city has one or more of these trails, which are often laid out on old, unused rail beds. I prefer these trails to running on city sidewalks, dodging pedestrians."

John Oxford loves going for a run when he's in Washington, D.C., for his job with Renasant Bank. "Watching the sun come up over the Lincoln and World War II memorials is bar none the most beautiful run in America," he said.

Other favorite routes include the Kansas City Power and Light District, doing the "Rocky steps" at the Philadelphia Museum of Art, New York's Central Park and, in California, West Hollywood. He also likes running on college campuses such as the University of North Carolina at Chapel Hill and UCLA.

"Treadmills are so boring," Oxford said. "It's neat to see where you are."

Other popular places for runs cited by business travellers include along Lake Michigan in Chicago, along the Charles River in Boston, around Lady Bird Lake in Austin, Texas, along the Seine in Paris, in London's Hyde Park, in Atlanta's Piedmont Park, in Vancouver's Stanley Park and, in San Diego, along San Diego Bay and up and down the outdoor stairs at the San Diego Convention Center.

In addition to obvious aids like GoogleMaps, or using GPS on a smartwatch or cellphone to guide you back to your hotel, you can plan and support your runs with apps and sites like MapMyRun, Strava, AthleticMindedTraveler, Endomondo and RunKeeper.

Looking for others to run with? Find a group on Meetup.com wherever you are.