That makes it easy for business travellers to squeeze a little sightseeing in after a day of meetings. Take in a Broadway show and late dinner, or a night-time view from Top of the Rock, the Empire State Building or Times Square.

The Staten Island Ferry glides past the Statue of Liberty 24 hours a day, the 9/11 memorial is open until 9 p.m. and the High Line, a park built on an elevated rail line, stays open until 10 p.m.

But for something a little offbeat, or a fun outing with colleagues, consider an evening on Manhattan's Korea Way, also known as Koreatown or K-town, just steps from the Herald Square shopping district and Macy's on 34th Street.

The main drag, 32nd Street between Fifth and Broadway, is lined with Korean restaurants and karaoke bars. And while it might sound intimidating to make your own Korean barbecue or belt out "Livin' on a Prayer" with officemates, both experiences are fun and easier than you might imagine. 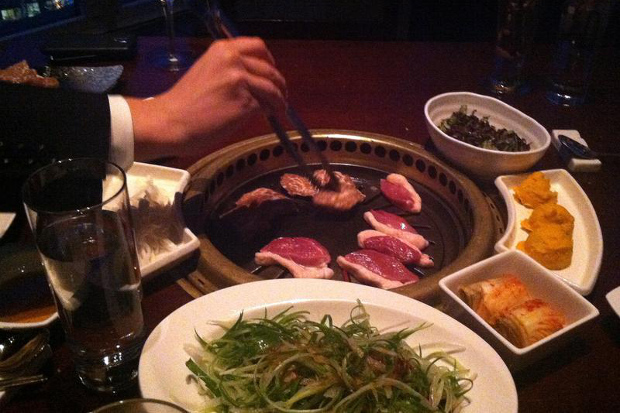 First, the food. The neighbourhood's Korean fried chicken places are cheap and yummy. Bonchon Chicken, around the corner from 32nd Street on Fifth Avenue, offers soy garlic or spicy wings, strips and drumsticks starting at $9 for six pieces. Another fried chicken foodie fave on Fifth Avenue is Kyochon.

For more upscale dining, head to Gaonnuri, which offers stunning views of Manhattan from a penthouse near 32nd and Broadway. The middle of the Empire State Building is practically in your face, and it's magical to see the lights of Times Square begin to glow as darkness falls. The restaurant's well-known guests have included Jack Ma, the China-based founder of e-commerce giant Alibaba.

Don't miss the table barbecue, which you can order with beef, duck, pork, chicken or shrimp, $28-$45.

Resist the temptation to ask your server to cook the meat for you. If you've ever fried anything at home or on a grill, you're more than capable of handling this. Just put the raw meat on the heated griddle in the middle of the table, searing and turning the pieces with chopsticks until done to your preference.

Gaonnuri's bar menu has small plates and the cocktail menu includes creations like ginger poire (Grey Goose, St. Germain, fresh ginger and lime juice) and The Oriental, made with soju, the classic Korean liquor strong enough to knock your socks off.

Karaoke options on the block include 5 Bar Karaoke Lounge a few doors down from Gaonnuri. Private rooms at 5 Bar include a bell for summoning another round of Cosmos.

And the song system is easy to navigate: Look up your favorite song in a thick, dog-eared book, type the number in and lyrics appear on-screen. Too shy to solo? Pick an anthem or oldie and invite the gang to sing along.

Room rentals are $10 per person, per hour, for four or more people. You'll be belting out "New York, New York" in no time.