The Arithmetic Of Departure Time

The Arithmetic Of Departure Time

With $40 to spend , I could have bought a one-way Ryanair flight from Stansted to Aarhus in a fortnight, and still had a penny change.

But instead, I invested it all in How Not to be Wrong: The Hidden Maths of Everyday Life by Jordan Ellenberg (Allen Lane, $40).

Ellenberg's scholarly yet friendly book would make ideal airport reading. However, as he explains in Chapter 12 ("Miss More Planes"!), if you have time to shop and read at an airport then you have turned up too early.

The notion that he elaborates upon is this: if you never miss a flight, you are allowing too much time. And, in his book, "allowing" equals "squandering".

Good mathematics, like the best kind of travel, is about simplicity. So I applaud Ellenberg's straightforward analysis of the most basic conundrum in air travel: getting to the airport.

It is oversimplifying his argument only a little to say that, if you are missing one or two flights in every 100 because you reach the airport too late, you have something close to the optimum strategy for timing your run to the airport. You might, by adding an hour to your arrival time, be able to eliminate those one or two missed departures, but in the process you would waste the equivalent of four days in the 21st-century purgatory of the modern airport.

It is not a new concept; the late Nobel-prizewinning economist, George Stigler, long held that "if you never miss the plane, you're spending too much time in airports". 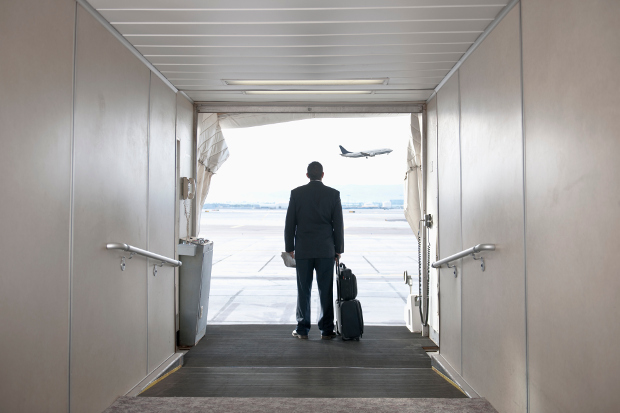 But he was a member of the Chicago School of Economics, which at the time was served by the world's busiest airport: Chicago O'Hare. If you missed the 7am to New York or Los Angeles, like London buses there would be another one along in a few minutes. And since the airlines were getting away with high fares, they were likely to forgive a little tardiness and book you on the next departure without penalty.

Britain in 2014 is not like that. Even among the airlines that sell forgiveness, the price of missing the deadline is high: easyJet has a £65 (A$115) "rescue fee", which buys you a seat on the next available departure. On traditional carriers, it is even worse: not only have you lost your outbound fare, but the inbound will likely be cancelled at the same time.

Therefore, the formula for you and me does not require analysis of "utils" and identifying a point on the Laffer curve, as Ellenberg outlines. It involves eliminating all the uncertainties you can, and then building in a bit of padding.

1. No checked-in luggage. You don't need it, you won't have to allow an indeterminate time at "express bag drop", and by taking carry-on only you also eliminate the risk that your bag will go off on its own little holiday.

2. Check in online, print out your boarding pass (or save it to your smartphone).

3. Choose public transport, ideally on rails rather than road, that runs to a published schedule. Work out the last possible departure you can take that will allow you to reach the airport one hour before your plane is due to go. Then take the previous departure.

(The Piccadilly Line occupies a special dimension of non-timetabled awfulness: if you are going to Heathrow's biggest and busiest terminal, Five, in my experience it is the opposite of Russian roulette: there is only one chance in six that the next train will be going to your destination. Other possibilities in the parallel universe that masquerades as the departures board on the western entrails of "the Picc" are Rayners Lane, the arc around to Terminal 4, the depot at Northfields, "train out of service" and all stations to Planet Tharg.)

That means the only airport uncertainty you face is the length of the security queue.

But what an unpredictability: typically, the airport's "service-level agreement" requires the procedure to take less than, say, five or 10 minutes, 95 per cent of the time. That means on one occasion in 20, it will be longer. And you and I don't know when. When you get unlucky, then take advantage of the fact that almost all your fellow passengers will have allowed too much time, and ask politely if you might jump the queue.

Like all good rules, this formula has exceptions. I turned up six hours before my flight from Melbourne because I was determined to be first in the queue at check-in and get an extra-legroom seat for an "all-stations-to-Gatwick" charter.

Amsterdam Schiphol and Singapore Changi are so full of airside distractions (such as, respectively, a Rijksmuseum outpost and a rooftop swimming pool) that they deserve some "dwell time". Terminal 2 at Heathrow, just opened, has some uncommonly appealing places to eat and drink.

If you are heading for a wedding, funeral or job interview, the downside of missing the flight is so huge that you should wisely add a large dollop of extra time.

When the journey to the airport and through security goes smoothly, you might want to buy How Not to be Wrong. But don't get so engrossed that you miss the last call.