US Airways Cleared For Stand Down

US Airways Cleared For Stand Down

After more than 75 years of flying, the end is near for US Airways.

American Airlines plans to shut down the venerable carrier over a 90-day stretch that could begin as soon as July, which would mean a final departure around October.

American executives designed the gradual fade-out to avoid the kind of technological glitches and massive flight delays that plagued United Airlines after it abruptly switched to Continental's computer systems in 2012.

US Airways flights will slowly disappear and be replaced by American flights in a single reservations system. It's one of the trickiest parts of merging two airlines.

"It's absolutely critical because it's really the core system for almost every customer-facing transaction that happens at the airline," said Maya Leibman, the chief information officer for parent American Airlines Group Inc, now the world's biggest airline operator.

Even if all goes smoothly, vestiges of US Airways will remain.

Most noticeably, American won't finish repainting all the US Airways jets until mid-2016 and even later for a few US Airways Express planes. Company executives expect that they will still be combining labour groups and flight-operating systems until 2017, four years after the merger. 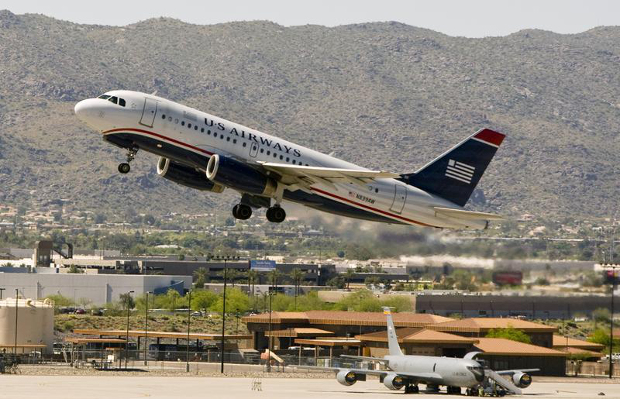 The disappearance of US Airways isn't likely to affect fares. American already sets those for both carriers.

Since 2005, mergers have eliminated five big airlines and left four companies controlling more than 80 percent of the U.S. air travel market. Fares have been rising modestly, and fees have gone up sharply.

US Airways traces its roots back to 1939 and the founding of an airmail delivery outfit in western Pennsylvania that was called All-American Airways. It became Allegheny Airlines, gobbled up Mohawk Airlines, and morphed into US Air and then US Airways.

When US Airways combined its reservations system with that of America West Airlines after their 2005 merger, there were disruptions at several airports.

Kerry Philipovitch, who is American's senior vice president of customer experience and held the same position at US Airways, blamed lack of adequate training for employees. This time, she said, American plans to train 9,000 airport employees and 2,000 reservations agents for the changeover.

From the start, the company decided to switch US Airways to the computer and reservations systems of much larger American.

That reduced the number of employees who would need retraining, and it stood in contrast to United, which adopted the systems of smaller Continental. American simplified things by taking care of some business separately, such as merging the frequent-flyer programs earlier this year. And it is getting technology advice from IBM.

American has notified travel agents that as soon as July, all US Airways flights at least 90 days out will change to American flights in the schedule. But the wind-down of US Airways could still be delayed — executives declined to commit to a deadline.

"I've worked in technology long enough to know not to give any specific dates," Leibman said, "because when you don't necessarily meet that date for a good reason, it looks like a failure to the outside world.

This article was written by David Koenig from The Associated Press and was legally licensed through the NewsCred publisher network.