Use Your Phone To Beat Hotel Queues

Use Your Phone To Beat Hotel Queues

Hotels don't want guests to have to linger at the front desk - or even stop by at all.

New programs are helping speed up the check-in process for busy travellers, or in at least one case, letting them go straight to their rooms by using their smartphone to unlock doors.

The innovations are still being tweaked as hotels scramble to catch up to airlines. Flyers today use their phones to check in, select seats and as a boarding pass.

Starwood Hotels and Resorts on Monday became the first chain to let guests unlock doors with their phones. The feature is available at only 10 Aloft, Element and W hotels but will expand to 140 more properties in those brands by the middle of next year.

Hilton Worldwide is the only other hotel chain to publicly acknowledge plans for mobile room keys - which it plans to roll out at the end of 2015 at more than 250 US properties in its Hilton, Waldorf Astoria, Conrad and Canopy brands.

"Guests want this because it makes their lives simpler," says Mark Vondrasek, who oversees the loyalty program and digital initiatives for Starwood. "The ability to go right to your room, gives them back time."

Other hotel companies are finding other ways to streamline the arrival process.

Marriott International launched the ability to check in through its app at 330 North American hotels last year. By the end of this year, the program will be live at all 4,000 hotels worldwide.

When a room becomes available, a message is sent to the guest's phone. Traditional room keys are pre-programmed and waiting at the front desk. A special express line allows guests to bypass crowds, flash their IDs and get keys.

At Hilton, all 4,000 properties worldwide will have a similar check-in by the end of the year. The one added feature: Guests can use maps on the app to select a specific room.

InterContinental Hotels Group is testing express check-in for its elite loyalty program members at 500 hotels, primarily in the US. 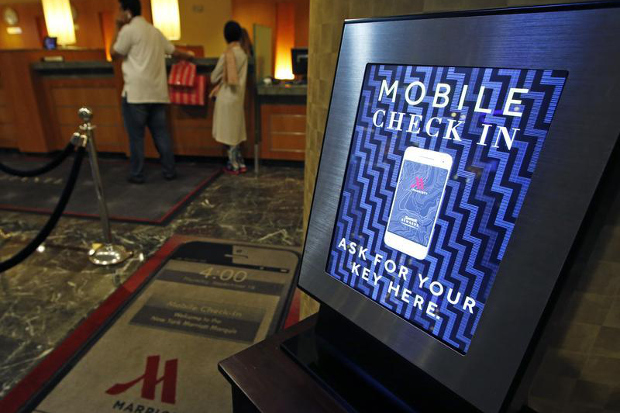 The services are geared toward road warriors who don't want to slow down, even for a second. Guests who like personal interaction can still opt for a more leisurely check-in, and hotel companies say the move isn't about cutting jobs.

"If you're at the end of a long day, you might want a little less of a chatty experience. But if you're showing up at a new resort, you may want to know what the pool hours are," says Brett Cowell, vice president of information technology for Hyatt, which is testing permanent keys for frequent guests at six hotels.

The push isn't just about avoiding frustrating check-in lines. Hotels are trying to get more travellers comfortable using their mobile apps to interact.

In some cases, that means using an iPad to request a wakeup call.

But ultimately hotels would like to see people purchasing suite upgrades, spa treatments and room service though their phones and tablets - and at some point wearable devices like smartwatches.

Marriott guests made $1.25 billion in bookings last year through its mobile app, according to George Corbin, senior vice president of digital for the company.

Switching to smartphone room keys won't be easy. Starwood's app communicates using a Bluetooth data connection. Each hotel room needs to have a new lock that can communicate with phones.

The top 15 hotel companies have more than 42,000 properties worldwide with a combined 5.2 million rooms, according to travel research firms STR and STR Global.

Many hotels have made updates over the past few years, but they remain the minority.

Then there is the issue of security. If there is knock on the door late at night and a guest goes to the peephole to see who is there, nobody wants the phone in their pocket to accidently unlock the door. That's why Starwood requires the phone to actually touch a pad on the outside of the door to open it.

Finally, only one phone can be linked to a room at a time. So if two people are staying in the room, they still need to get a traditional key for the second traveller.

Marriott says it is holding off on smartphone keys until all the potential bugs can be resolved.

"If there was ever a moment that matters," Corbin says, "it's the moment when you go up to your door and the key doesn't work."

But for the frequent business traveler, this might just be the time-saver they are looking for.

Bruce Craven spends about 100 nights a year on the road, traveling between his California home and New York where he does executive training programs and teaches at Columbia Business School. He's been testing Starwood's smartphone room key since March.

"If you're travelling all the time, little things can take on a symbolic importance," Craven says. "This is one less thing that I need to think about."

Copyright Associated Press. All rights reserved. This material may not be published, broadcast, rewritten, or redistributed.