Uzbekistan Airways To Check Your Weight

Uzbekistan Airways To Check Your Weight

Uzbekistan Airways passengers will be directed to a “special weighing machine” at the departure gate, to determine each person's average weight with their hand baggage.

The airline said that individual passengers' weights would not be disclosed, and “full confidentiality of results is guaranteed”, with the weighing machine only categorising passengers by sex and into adult and child groups.

“According to the rules of International Air Transport Association, airlines are obliged to carry out the regular procedures of preflight control passengers weighing with hand baggage to observe requirements for ensuring flight safety", the company said in a statement.

The Tashkent-based airline, whose motto is "safety, stability, comfort", has not made it clear whether larger passengers will be charged a fee, or excluded from flights on smaller planes.

It is also not known what measures would be taken should the total weight of the passengers and their hand luggage appear to exceed an aircraft’s weight limit and guidelines. 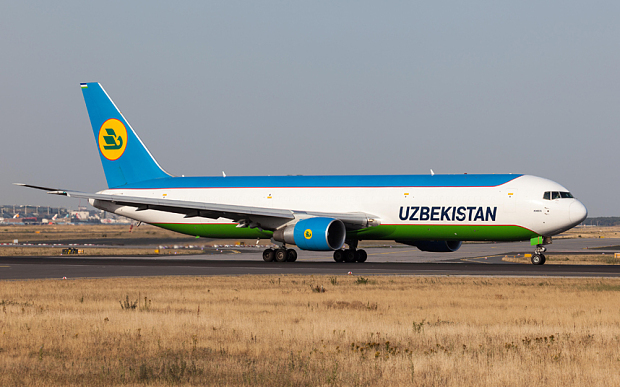 More than 44 per cent of those 20 years and older in Uzbekistan were found to be overweight, while nearly 15 per cent were obese, according to estimates from 2008 reported by the World Health Organization. The report predicts that in 2020, 13 per cent of men and 20 per cent of women in the same age group will be obese.

Uzbekistan Airways operates numerous routes throughout eastern Europe and Russia, and between London and Tashkent. It is sometimes used for internal or regional flights by tour operators offering "Silk Road" and central Asia tours.

Telegraph Travel received an overwhelming response to a recent story on a man who attempted to sue Etihad Airways after he claimed he was left with back pain from sitting next to an obese passenger.

Claire Mackichans wrote that her husband endured a nine-hour flight from Los Angeles next to a large gentleman, whom she said was so overweight, "he needed to shuffle sideways along the aisle and bring his own seatbelt extension on to the flight with him. He intruded at least 20cm into my husband's seat and was so large he couldn't fold down his tray table.

"Virgin Atlantic flight staff were unhelpful when my husband complained on two occasions during the flight. He had paid for a seat but was having to share half of it with another passenger. No other seat was available apparently."

Uzbekistan Airways is not the first airline to keep an eye on passengers' weights. In 2013,

Samoa Air became the world’s first airline to charge passengers by their weight rather than per seat, in a bid to raise obesity awareness and improve public health. The Pacific island nations served by the carrier have some of the world's highest rates of obesity.

The Pacific national airline allows passengers to nominate their weight and then measures them on scales at the airport.

Passengers do not pay for a seat but pay a fixed price per kilogram, which varies according to the length of the route. At the time, the head of Samoa Air, Chris Langton, said the system was fairer and that some families with small children were now paying substantially cheaper fares.

In the same year, the airline also introduced a special "XL class" to cater for larger passengers, creating a a wider row on its aircraft for passengers weighing more than 130 kilograms.