Virgin America and Delta Air Lines have emerged the leaders in the race to bring wireless connectivity to the skies, according to a new report card on in-flight Wifi.

After analysing the Wifi capabilities and services of commercial flights, Routehappy.com, a site that ranks flights based on their "happiness factor" (Wifi, in-flight entertainment and service etc.), concluded that odds of getting in-flight Wifi in the US are highest on carriers Virgin America and Delta Air Lines.

When it comes to non-US airlines, the same could be said of Icelandair, Norwegian and Etihad.

A closer look at the stats, meanwhile, shows that while Virgin America may boast the highest percentage of flight miles and flights with Wifi and in-seat power, when it comes to actual number of flights, Delta comes out on top with more than 3,500 flights offering in-flight connectivity. 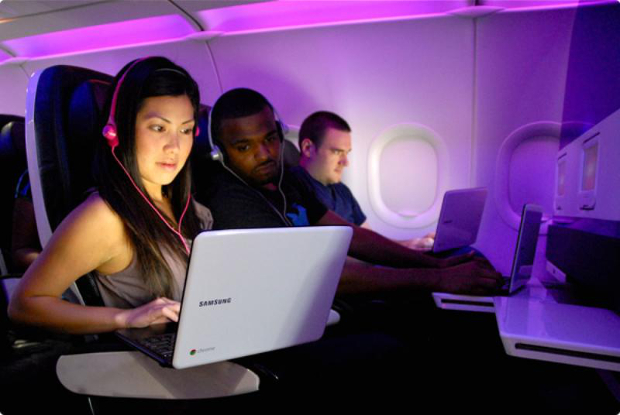 Overall, the report found that flyers now have at least “some chance” of accessing Wifi on about a quarter of flight miles worldwide.

“Some chance” is defined as up to a third of an air carrier’s fleet.

As for quality, JetBlue was deemed to boast the best Wifi service.

Here’s a closer look at how the airlines check out.

US airlines with the greatest number of flights with Wifi:

Airlines with the greatest percentage of flights with Wifi:

Non-US airlines with highest percentage of flight miles with Wifi