10 Free Things To Do in San Francisco

10 Free Things To Do in San Francisco

Even in the most expensive world cities, there are sights and attractions that don’t cost a cent. From outdoor concerts to festivals, hikes and beach walks, or museums and self-guided architectural tours, free events can be just as fun and exhilarating as a pricey tour. In San Francisco it doesn’t take a lot of money to have a good time. These attractions are proof that some of life’s good things really are free.

Watch the Sea Lions at Pier 39 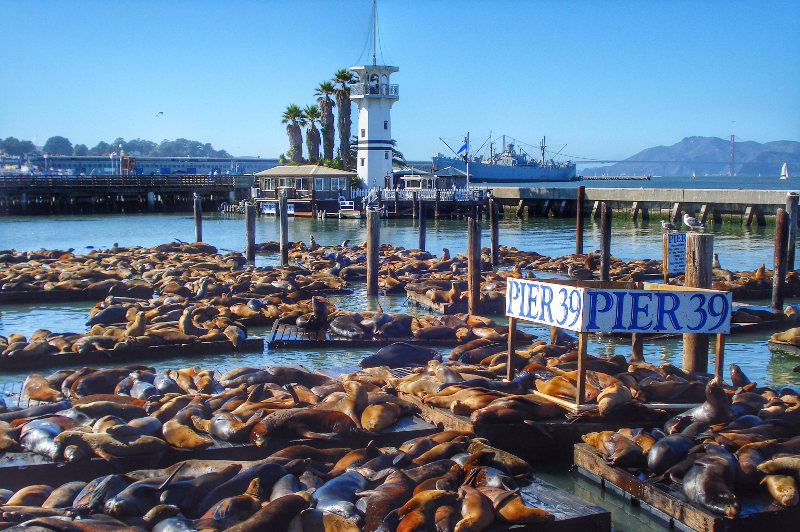 The world famous sea lions always have a home at Pier 39. Image: Getty

What can be more fun than watching the lazy, and sometimes playful, sea lions as they sun themselves. Pier 39 is home to a large family of these wild ocean creatures, and their twitching noses and freckled faces make them a treat to watch. 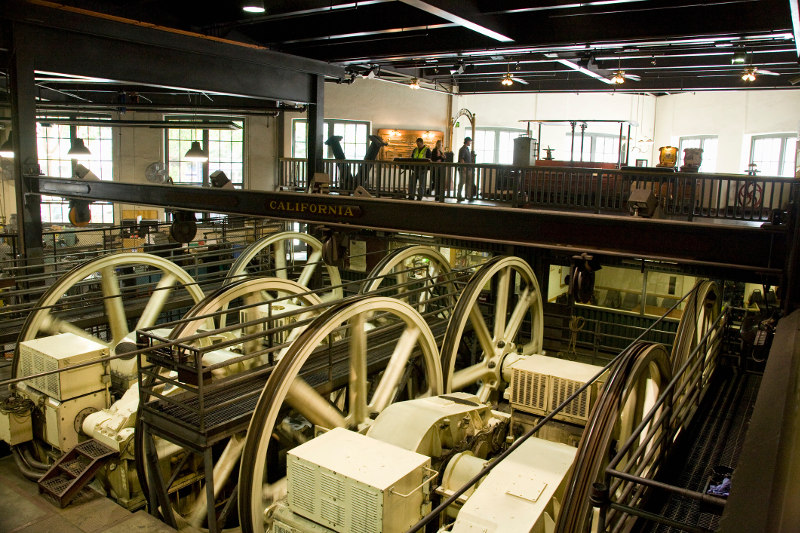 Visit the Cable Car Museum for a fascinating look back at old San Francisco and how the iconic cars operate. The museum also tells the story of the inventor of the cable car, local cable car manufacturing and the history of the system’s expansion. The museum houses three historic cars from the 1870s as well as a number of mechanical devices like cables and grips. Built between 1913 and 1915, San Francisco’s beautiful Beaux-Arts inspired city hall is arguably the most beautiful structure in the city. Graced by a massive dome fashioned on Paris’ Val-de-Grace, the building’s exterior is made mostly of granite and sandstone. City Hall’s ornate interior is known for its beauty. 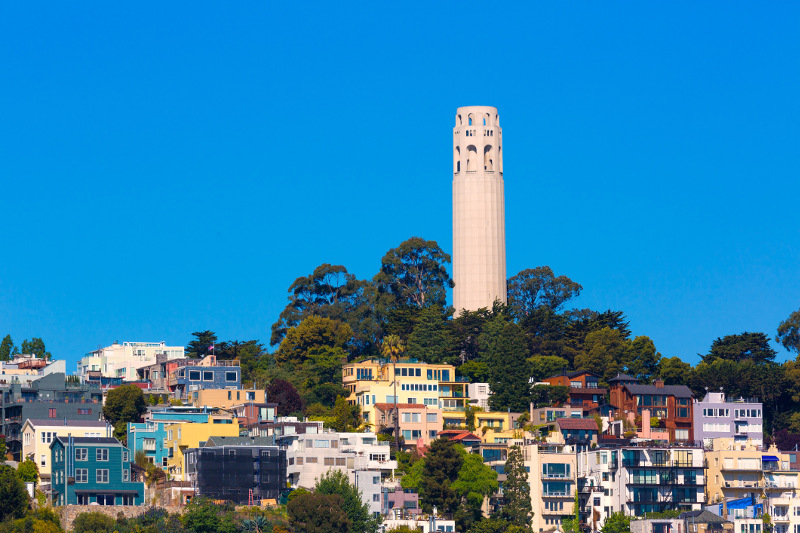 Head to the stairways near Coit Tower for the best sightings. Image: Getty

A rarity in the continental United States, wildlife spotters and bird watchers are in for a treat on Telegraph Hill and along the Embarcadero with the chance of spotting a parrot. Australians might recognise the familiar squawking, mistaking the sound for a cockatoo, but these colourful birds are of an entirely different breed, and colour. 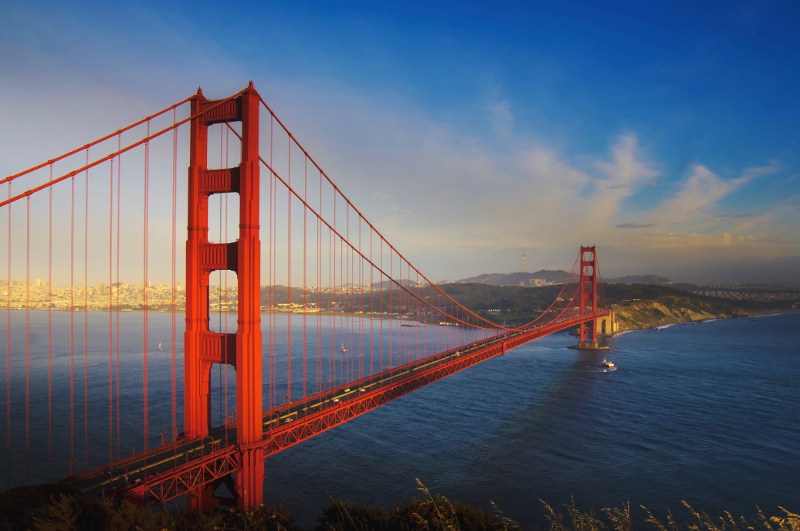 The Golden Gate Bridge was the longest suspension bridge in the world until 1964. Image: Getty

One of the most popular activities in San Francisco is a walk or bike ride over the Golden Gate Bridge. Not only are the city and bay views from the bridge spectacular, but the walk is the perfect opportunity for a close-up inspection of a global landmark. The bridge is almost three kilometres long, but the reward at the end is a lovely panoramic view of the San Francisco skyline. 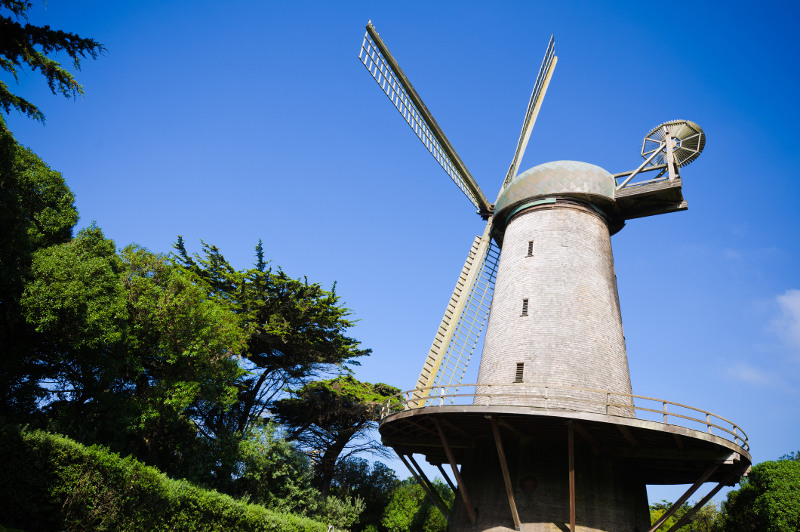 The Dutch Windmill was once used for irrigation, pumping water into Stow Lake. Image: Getty

A remarkable green space in the heart of San Francisco, Golden Gate Park is the ideal place for a morning or afternoon stroll, a picnic or photography and bird watching. Park features include the Conservatory of Flowers, historic windmills, a chain of lakes and ponds and lovely landscaped gardens. The park’s Music Concourse was built in 1899 and is the site of small concerts and performances. The Golden Gate Park Band performs at the concourse most Sundays during the summer months. 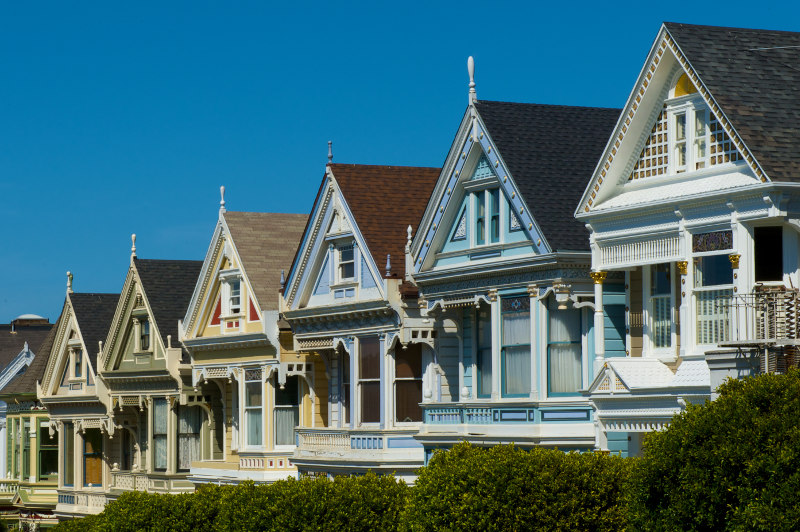 The Painted Ladies were constructed between 1892 and 1896, and survived the 1906 earthquake. Image: Getty

After the Golden Gate Bridge, the row of colourful homes on San Francisco’s Alamo Park Square vie for most photographed site. Take a blanket and light lunch or picnic and enjoy the stunning city views as you admire the beautiful row houses popularized in many TV shows and movies. 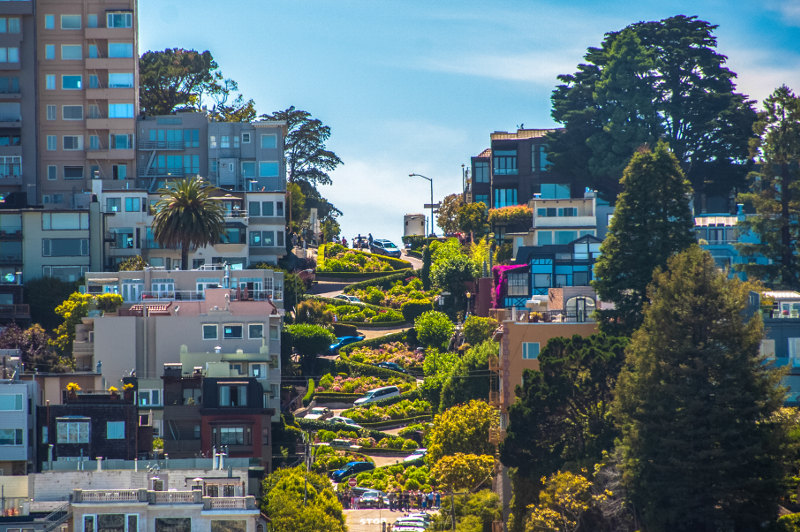 Enjoy the twists and turns on the “crookedest street in the world.” The street’s sharp turns and downhill grade require concentration when driving so as not to collide with the garden walls – as some have been known to do when distracted by the beautiful San Francisco views. 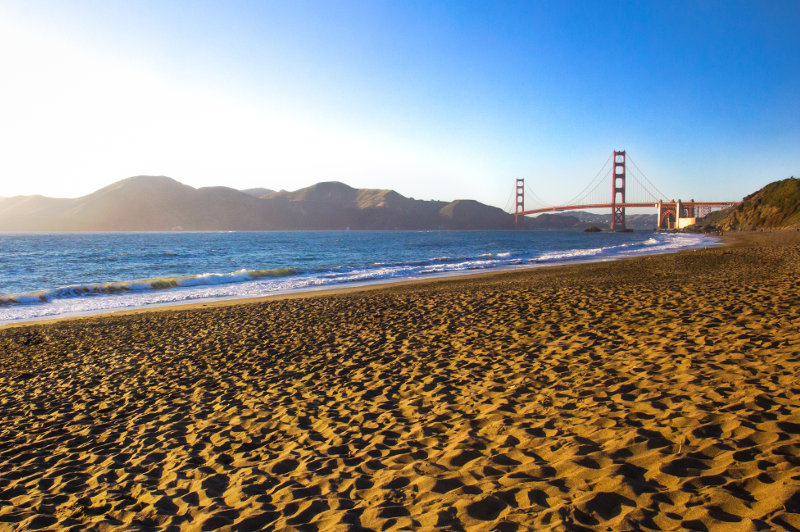 While the weather is rarely warm enough to swim, the beaches around San Francisco are ideal for a bay-side walk or relaxing day out. Baker Beach is one of the area’s best. A designated nude beach on the north end, the rest of the beach is perfectly suited to families and clothed beachgoers looking for a swim or beach side volleyball game or Frisbee toss. A touch of Greece and Rome in Pacific Heights, San Francisco. Image: Getty

Built for the 1915 Panama-Pacific Exposition, the Greek and Roman inspired monuments are a popular spot for wedding photography and relaxing strolls. Located near the waterfront and the northern entrance to the Presidio, the lake side Palace offers a great sightseeing stop-off before continuing on your walk or bike ride to the Golden Gate Bridge.