American landscape architect Sheila Wertimer has more than 30 years’ experience of designing gardens and parks, private and public. Based in Charleston, South Carolina, she works on projects from the south-eastern states through to New England, and is known for her timeless, elegant designs. We asked her to select her Top 10 gardens in the United States. 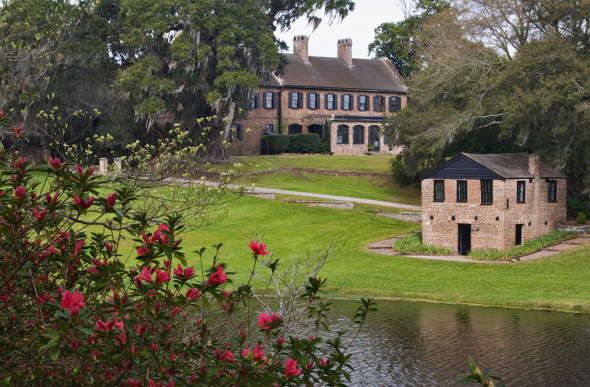 Middleton Place, Charleston, South Carolina. "This is one of the most magical gardens in the United States, and our oldest landscaped garden. Set on a curve of Ashley River — and people used to arrive at Middleton Place by water — a very strong European influence shows in the beautiful geometry, with a series of terraced lawns and butterfly lakes, and tiny “rooms” of secret gardens. You can wander all day without getting bored. Although there is always something to see, much of the old gardens are focused on the spring with one of the South’s most impressive displays of camellias and banks of azaleas." Image: Alamy 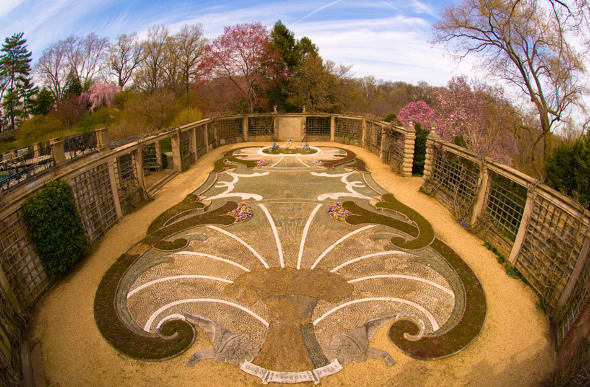 Dumbarton Oaks, Washington DC: "I love this garden because it was originally designed in the 1920s by Beatrix Farrand, one of our very early female garden designers. She knew Gertrude Jekyll, the influential English horticulturist, and was way ahead of her time. Dumbarton Oaks is a garden of different informal rooms, beautifully interconnected and using lots of natural plants. There is a strong English-Italianate influence, with classical forms, strong geometries, enclosed rooms, vistas and focal points. And she managed all this while coping with its varied topography; no mean feat." Image: Alamy 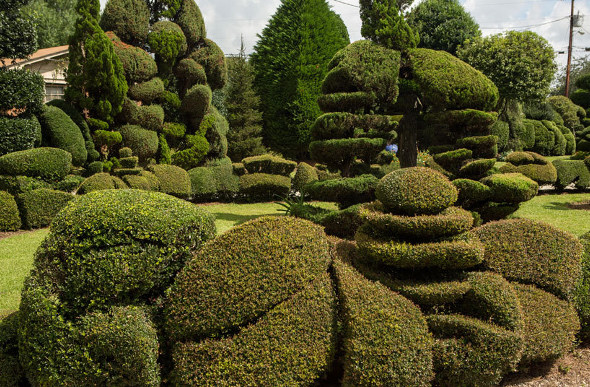 The Pearl Fryar Topiary Garden, Bishopville, South Carolina:"This is really, really fun — and unexpected. You drive to the outskirts of Bishopville, a small town in rural South Carolina, an area of little brick bungalows, and then you come across this topiary garden that just goes on and on, full of fantastical shapes. Pearl is a tall African-American who worked at the Coca-Cola bottling plant and just started doing topiary. He does it all with a chainsaw, even making all his own paving stones. I call him an ageing hippy — he is a friend now — as the place is dotted with signs saying Peace and Joy. It is one of those gardens you just fall into, and love instantly." Image: Alamy 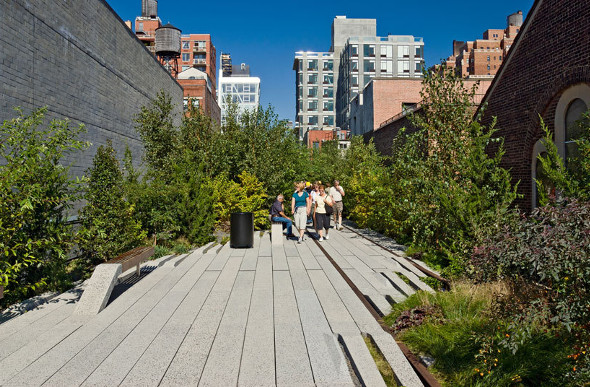 The High Line, New York: "I think this is a miracle — an aerial greenway made out of the elevated disused freight line that ran on the West Side of Manhattan until 1980. Different designers worked on it, together with hundreds of volunteers, but there is no element that makes it feels like design by committee. The planting is terrific, with lovely details: flowering trees, perennial grasses, perennial borders. Every time I walk it I see something different. Paths and benches have been made from old rails and cross-timbers. The sightlines are amazing; because of the height you see parts of New York you wouldn’t see otherwise." Image: Alamy 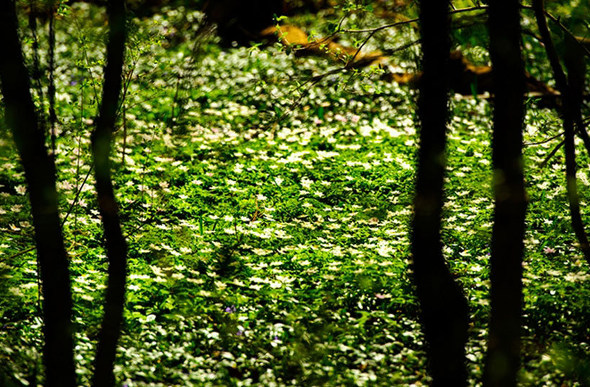 Root Glen, Clinton, New York state: "People probably think that this glen, in upstate New York, is entirely natural and that someone has just added a few bridges. Not so. Three generations of the Root family, including Elihu Root, a US senator and Nobel peace prize-winner, worked hard to create what we see today, taking advantage of the natural site with its beautiful long glen and stream at the bottom, and turning it into a haven. They brought in trees and plants they loved, such as heroic hemlocks and beautiful red maples, ferns and a wonderful peony collection. A series of paths run up and down the glen, through the woods. Each time I wander through, I see a different detail." Image: Root Glen 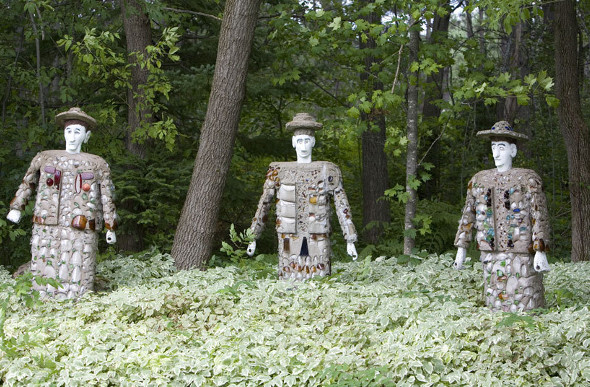 Wisconsin Concrete Park, Phillips, Wisconsin: "We have a summer house in Wisconsin, and one time we were driving from there to visit people on the other side of the state when, suddenly, I caught sight of this place out of the corner of my eye. I knew nothing about it. It is the most eccentric place — hundreds of monumental figures made out of concrete spread over three to four acres. It was created by a local man, Fred Smith, and is his view of America’s pioneers, both ordinary folk, such as farmers tilling the soil, and famous faces such as Abraham Lincoln. Some are painted but mostly they are inset with beads, jewels and little rocks. After he died, it fell to rack and ruin until it was rescued by the Cola Foundation and donated to the county. I go back often and say hello to my favourite characters." Image: Alamy 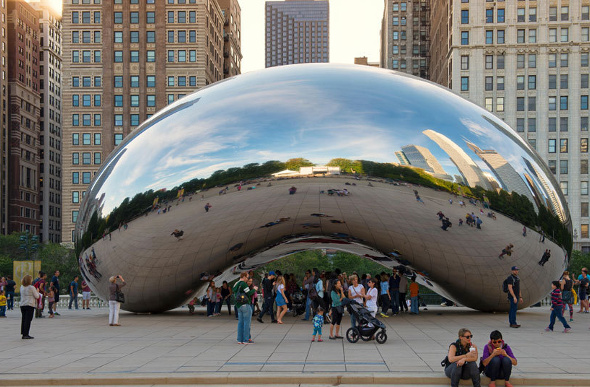 Millennium Park, Chicago, Illinois: "I like to think of this as a Disney World for landscape architects. For years it was an abandoned railroad property until it was transformed this century with a sensational series of designs and sculptures by world-class people such as architect Frank Gehry and Dutch garden designer Piet Oudolf. Gehry designed the huge billowing steel shell that is an outdoor concert platform. There is Cloud Gate, nicknamed “The Bean”, another huge stainless steel sculpture, by Anish Kapoor, and an enormous fountain that reflects images of people of multi-ethnic backgrounds — you have to see it to understand. Oudolf was one of the designers of the Lurie Garden, a peaceful five-acre area with an incredible design of perennials that keeps evolving." Image: Alamy 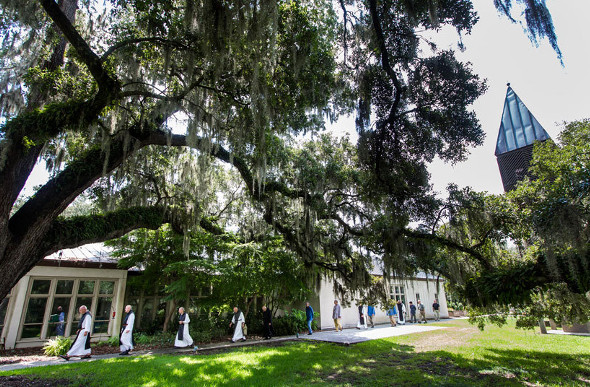 Mepkin Abbey, Moncks Corner, South Carolina: "Formerly a plantation, the original gardens were designed in the 1930s by Loutrell Briggs, a landscape architect from New York. Since 1949 there has been a community of monks here, and now it is a beautifully contemplative place to go and wander. The old gardens and cemetery step down to the Cooper River with lovely walkways through them. It is so magical, with lots of old Charleston plants, sweeping lawns, Southern live oaks hung with Spanish moss, banks of azaleas, magnolias and dogwoods. Parts of the garden are almost left as a ruin — but in a romantic way." Image: Alamy 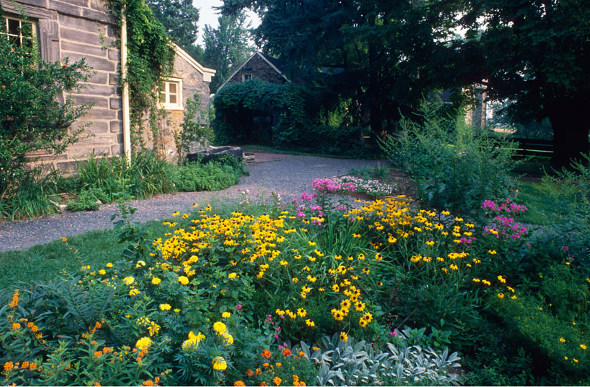 Bartram’s Garden, Philadelphia, Pennsylvania: "John Bartram (1699-1777) was an amazing horticulturalist — America’s first true botanist — who amassed an extraordinary North American seed and plant collection, the best in the world. He was so renowned that experts in Britain came to him for seeds, and he was appointed Royal Botanist to King George III. His garden has been meticulously restored; it is like an old country garden in the middle of Philadelphia. There are medicinal plant and nursery areas, a spectacular gingko tree and a wonderful Franklinia, a rare and delicate tree that Bartram saved from extinction." Image: Alamy 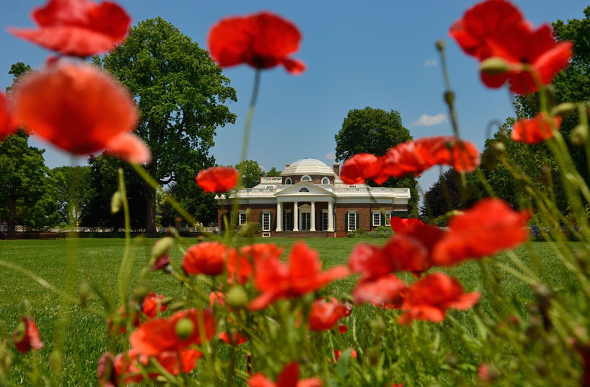 Monticello, Charlottesville, Virginia: "One of the most visited, and revered, gardens in the United States, both because of its owner Thomas Jefferson — one of America’s founding fathers and author of the Declaration of Independence — and the research done here that continues his work. He was intimately involved with the gardens; you can tell that from his diaries. They have used these to restore his vegetable garden, which I think is one of the most interesting areas; a terrace 325 metres long on the side of a hill. There is also an ornamental forest, 20 oval-shaped flower beds, a beautiful winding flower walk, orchards and vineyards. He was a genius and you cannot help but feel a connection with the man when you’re here. It is a wonderful place to spend a full day." Image: Alamy

Visit your local Flight Centre or call 131 600 for more advice and the latest deals on travelling to The United States.