Atlanta may be known for its busy airport and commercial headquarters, but there's much more to it. In summer, Georgia's state capital comes alive with numerous festivals, for everything from design and architecture to beer.

As the hometown of Martin Luther King Jnr, Atlanta is a must for history buffs, and getting to the heart of Sweet Auburn, the civil rights leader's old neighbourhood, is now even easier, thanks to the new streetcar (tram), which connects the area to downtown.

Downtown Atlanta is 16 kilometres north of the airport.

The quickest and cheapest way to get into town is by using the Marta public transport system. Pick up a stored-value Breeze card for $US1 ($A1.30), on which single train fares are $US2.50.

Passes for set time periods can also be added; two days costs $US14. 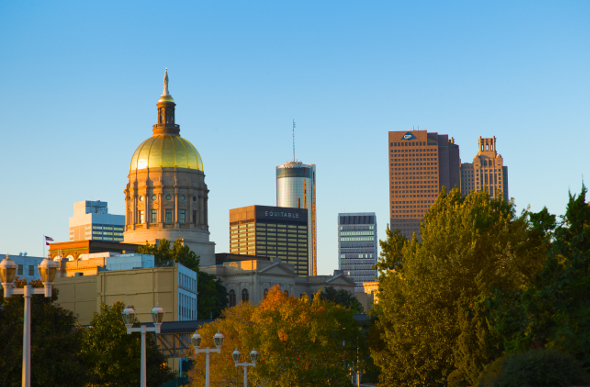 The heart of a state capital (all images: Getty)

From the airport, take the 10-minute shuttle to the Marta station, from where the train (Red or Gold line) will get you to central Five Points station in around 20 minutes.

The streetcar operates a circular route in central Atlanta. A single fare is $US1, and you can use your Breeze card.

Encircled by the I-285 motorway, Atlanta is undoubtedly a city of drivers. There are only four train lines, running roughly north to south and east to west, so coverage can be patchy, but if you're happy to walk a little or take the bus, you can usually fill in the gaps.

Five Points, where all the train lines converge, is downtown, in the skyscraper-lined commercial district where many of the city's tourist attractions are located. 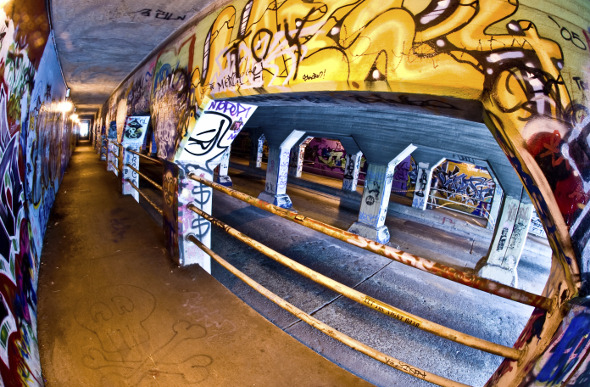 On the city's underground network

To the north is Midtown, where you'll find universities and museums, such as the High Museum of Art at 1280 Peachtree Street NE. Further north still is Buckhead, an area of dual-carriageways, luxury hotels and high-end shopping malls.

The east of the city is home to several artsy neighbourhoods, from chi-chi Virginia-Highlands to hip Little Five Points and East Atlanta Village. The main visitor centre is at 65 Alabama Street SW.

Aloft Atlanta Downtown at 300 Spring Street, is one of the newest hotels, with spacious, modern rooms, free Wi-Fi, a bar and a splash pool.

It lacks a restaurant, but you can eat from the 24-hour grab-and-go snack bar.

If proximity to headline attractions is your priority, check into the Omni Hotel at CNN Center, 190 Marietta Street NW. In the heart of downtown, more than 1,000 rooms are spread between its two towers.

Explore with your feet

Most of Atlanta's top attractions are squeezed into a relatively small area, connected by Centennial Olympic Park, built for the 1996 Games.

Start at CNN Center, where you can take a tour of the news organisation's global headquarters and studio, and learn how programs are put together. 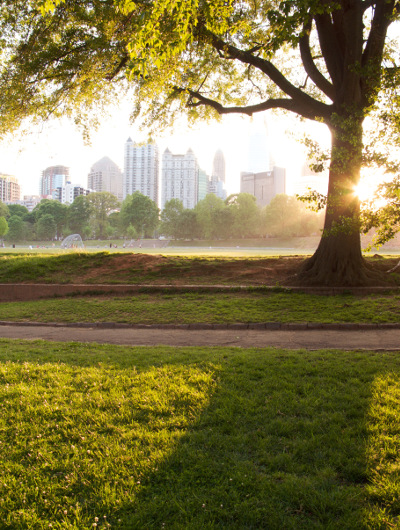 Walk north through the park (maps and signposts will keep you on track), stopping at the World of Coca-Cola. Its interactive exhibits, retro ads and – of course – samples will keep children entertained.

But if you're not a fan of the fizzy brown stuff, head for the National Center for Civil and Human Rights at the northern end of the park. The striking contemporary building, which opened last summer, offers a fascinating insight into the civil rights movement.

Lunch on the run

Head over to Little Five Points to fuel up. Cosy beer bar The Porter at 1156 Euclid Avenue NE has an eclectic menu – think duck confit ruben sandwiches, kale caesar salad and huge hotdogs – and more than 400 brews with which to wash it down.

Check the art at the Airport. Airports As Art Galleries

Try our American cities quiz. Quiz: Which USA City Is Your Dream Destination?

Little Five Points has a great selection of one-off shops. Vinyl-lovers should visit Criminal Records, next door to The Porter at No 1154-A. For vintage threads, try Rag-O-Rama at No 1111 or Clothing Warehouse at 420 Moreland Avenue NE.

Dining with the locals

It's impossible to miss The Vortex, a few doors down from Clothing Warehouse, at No.438. Walk through the giant skull doorway for what are billed as 'the best burgers in Atlanta', including the deliciously spicy Hell's Fury.

Arrive early at popular West Egg Cafe at 1100 Howell Mill Road. The decor is all concrete floors and subway tiles, while the menu features southern specialities and the usual brunch items.

For a mix of the two, try the fried green tomato BLT.

Piedmont Park may be the city's best known, but for a modern take on green space, cross the street from Piedmont's south-east corner, by the Park Tavern, and join the BeltLine.

Atlanta is a city for the driver

The repurposed railway track is Atlanta's equivalent to New York's Highline – though locals will tell you Georgia's capital had the idea first.

The BeltLine's East Trail takes you south through the city; it's still a little rough and ready in places, but between the wild grass and city views are some lovely little stop-off points, such as Paris on Ponce and Pop Marche, a warehouse filled with quirky antiques and flea-market finds.

In the autumn Art on the BeltLine is due to return, with artworks lining the route.

From the southern end of the trail, head west to the Martin Luther King National Historic Site. Orientate yourself at the visitor centre at 450 Auburn Avenue NE, then head to the civil rights leader's home. 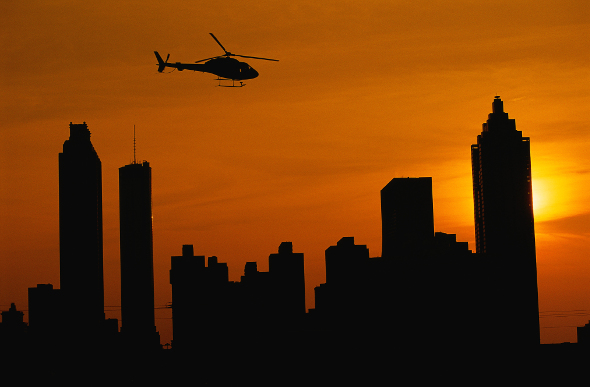 See the sun go down over the city

Tours of the house are free, but first-come-first-served, so if you don't get a ticket, explore the site's other landmarks, including King's tomb, and Ebenezer Baptist Church, where he and his father preached.

Take in the view

Visit your local Flight Centre or call 131 600 for more advice and the latest deals on travelling to Atlanta.

This article was written by Nicola Trup from The Independent and was legally licensed through the NewsCred publisher network.

Nicola Trup is the Deputy Travel Editor at The Independent and an avid traveller.
more articles from this author