Even if you're not a shopaholic, you're bound to spend at least some of your time in Bangkok in the mall – especially if you're travelling with someone who can't resist a bit of retail therapy.

But don't worry. Not only do these five multi-storey cathedrals of commerce offer air-conditioned respite from the Thai capital's steamy, congested streets, they also boast something for everyone: upmarket global brands and cool local labels; delectable food and deluxe cinemas; eye-catching design; and bundles of people watching.

With its striking blue and green facade overlooking a near-constant blur of motorised traffic, MBK is one of Bangkok's most photographed landmarks (tourists capture it from the elevated walkways of the Siam shopping district).

This was Asia's largest shopping centre when it opened in 1985, and although it's since been usurped in size by malls in China and the Philippines, it's still a colossus, with over 2,000 stores and eateries spanning its eight floors.

Electronics, humorous T-shirts and Thai souvenirs (think Muay Thai shorts and tuk-tuk-themed tote bags) are just some of the things you can buy at MBK, which draws more than 100,000 visitors daily. 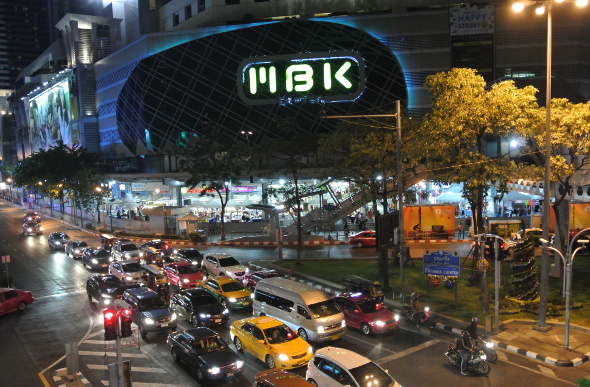 Unveiled in 1973, Siam Center is one of Bangkok's first malls, though you'd struggle to believe it as you walk through its shiny corridors.

Given a slick revamp for its 40th anniversary, it now sports a medley of glass, steel, wood and copper, and attracts a youthful, fashion-conscious crowd with a slew of international brands such as Havianas and SuperDry. These are complemented by outlets of hip Thai clothing brands including Tango, Baking Soda, Greyhound and Kloset.

Siam Center is linked to another smart mall, Siam Discovery, which houses a branch of Madame Tussaud's on its sixth floor.

There's a distinctly upmarket vibe in this glitzy shopping mecca, dubbed 'The Pride of Bangkok'. As well as a raft of high-end brands (Gucci, Dior and Versace to name just a few), you'll find car showrooms for, among others, Lamborghini, Lotus and Aston Martin; Sea Life Bangkok Ocean World (one of the largest aquariums in south-east Asia); and a 15-screen multiplex cinema.

Paragon's food hall is one of Bangkok's most lavish. Prices are typically double those found in other malls, but you'll still get a tray-full of dishes – including som tam (green papaya salad), pad Thai (stir-fried noodles) and mango sticky rice – for a little over AU$10. 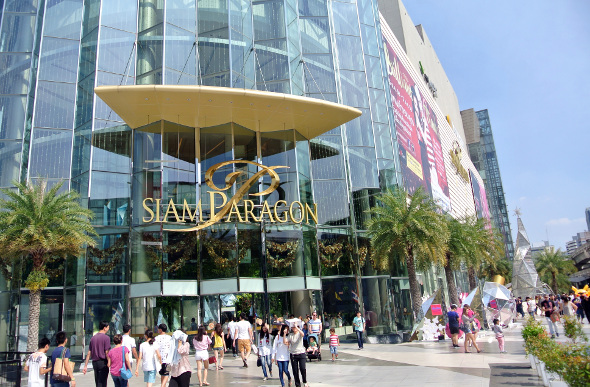 The entrance to Siam Paragon promotes the style within (Image: Steve McKenna)

Located between the Siam and Chit Lom BTS Skytrain stations, CentralWorld is popular with middle-class Thais.

Alongside famous non-Asian draws such as Zara and Ted Baker, you'll find Isetan (a Japanese department store spread over six storeys); Zen (a 'lifestyle megastore' that hogs seven floors and is renowned for its quirky products and furniture); and B2S (the flagship branch of Thailand's biggest bookstore).

Entertainment options abound in CentralWorld, not least an indoor ice-skating rink. The mall is connected to the Centara Grand hotel and convention centre where you'll find Red Sky, one of Bangkok's most enticing 'sky bars', on the 55th and 56th floors. 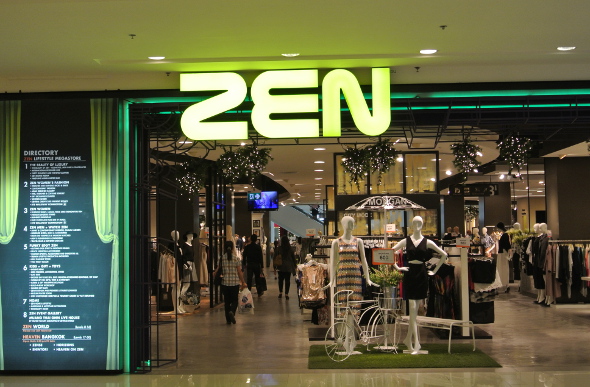 One of the local shops Zen in CentralWorld (Image: Steve McKenna)

A stone's throw from Sukhumvit MTR Metro station, Terminal 21 is arguably Bangkok's most funkily-designed and fun-to-explore mall. There's a general airport theme – with departures boards for signs – and nine floors dedicated to a different destination.

The Istanbul level carries a vague air of a Turkish bazaar and flaunts a jumble of shoes, bags and jewellery.

Paris, Rome, Hollywood, Tokyo and the Caribbean are also represented, while San Francisco dominates the fourth and fifth floors, with sculptures of iconic trams and the Golden Gate Bridge, and a 'Pier 21' food court fashioned on Fisherman's Wharf. 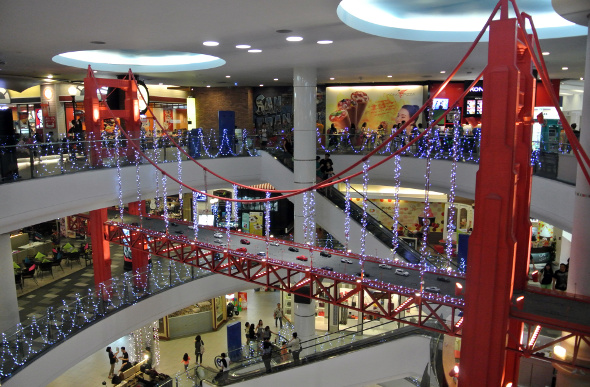 Purchase styles from around the world including San Francisco at Terminal 21 (Image: Steve McKenna)