Age is nothing but a number to George Jedenoff, one of the world's oldest skiers.

The world first heard of George last year, when he appeared in a video talking about how he skis every season in the US and has a particular penchant for powder. George is now 97 (and a half) and still hitting the slopes.

In a new video released by Ski Utah, where George has skied since 1960, the American imparts his secrets for staying young at heart.

"It's just not eating too much, and getting enough sleep, and maintaining moderations in what you do," apparently.

He said he's "so grateful to be able to ski" and pleased be back again for another season, before admitting he follows no specific exercise programme but does try to play a little golf in the summer.

George answered questions from fans at an event organised by Ski Utah. Asked about his love of powder, he said: "I love powder so much I get excited and I don't breathe and that's the worst thing you can do."

Zip up your pockets on the piste: Most Bizarre Items Lost On Ski Slopes

Make sure you've got the gear: Essential Items For A Ski Holiday

Age Is Just A Number

In his last video, the 97-year-old encouraged others to take to the slopes, no matter what their age. He repeated the sentiment again in his new video, saying: "Age is just a number. Forget about the number and live every day which you got and you gonna last longer." 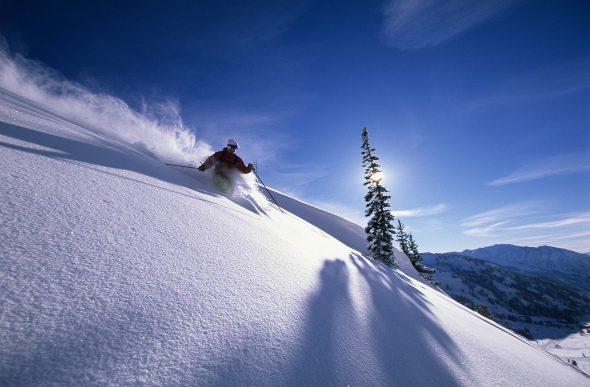 Remember to breathe when you're in amongst the powder in Utah. Picture: Getty Images

George has skied around the world but is particularly fond of his home resorts, Alta and Snowbird, where he skis with a group of "senior citizens" called the Wild Ol' Bunch of Alta, Utah, which he says has about 100 members.

He also dished out solid advice on not being too picky about the conditions: "You gotta learn to handle all kinds of snow," he said. "You can't sit around and wait for ideal conditions and moan about the fact the snow isn't good. Learn how to handle all types of snow and then you can enjoy it."

Hugh Morris is a news editor and staff writer at Telegraph Ski and Snowboard. He started skiing practically in nappies and has since honed his skill around the world despite abnormally long limbs and a dangerously laid back skiing style.
more articles from this author