“I can’t believe it’s already been 25 years.” That’s what every American over 40 told me, like a mantra, before I left to cycle where the infamous Berlin Wall once stood. The biggest story of one generation was already just a chapter in the history books of the next.

But that’s precisely what Germany wanted to avoid. They wanted this 160-kilometre symbol of oppression to be something for the German people – and any visitor to Berlin – to remember, and thus created the Berlin Wall Trail, or Berliner Mauerweg. 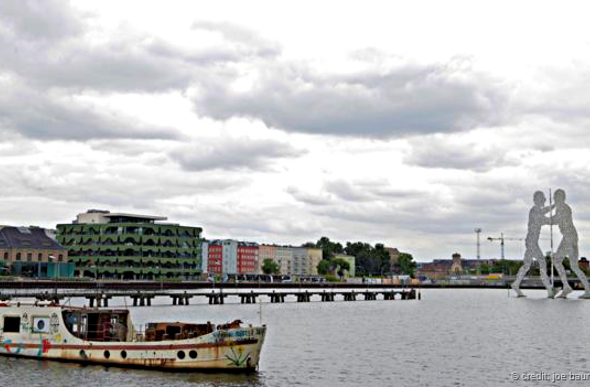 The circular route, completed in 2006, traces the former German Democratic Republic (GDR) border fortifications that surrounded West Berlin, travelling through the heart of the capital to its suburbs and countryside, packing in nearly half a century of history over a single day.

With 3 October marking the 25th anniversary of German reunification, I’d arranged to meet Sascha Möllering who offers cycling tours of the wall through Berlin On Bikes.

Although his regular 15-kilometre tours take in the main central Berlin sights over 3.5 hours, I’d organised a private 56-kilometre tour, which allowed us to go further along the trail and see some of the rural portions of the route.

Berlin on Bikes is headquartered in the Prenzlauer Berg neighbourhood’s Kulturbrauerei, a popular brewery in a past life that is now a cultural hub with cafes, museums and a theatre. As I waited by the army of tour bikes taking up nearly a city block, Möllering rolled in, dressed casually with a thin scarf around his neck and a light sweat on his forehead. 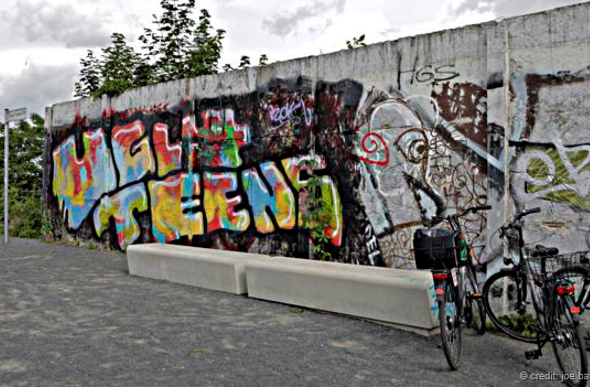 He was a child and teenager of West Berlin with an encyclopaedic knowledge of the wall and its history, as I was soon to learn.

We started off pedalling 2km north to the former Bornholme Strasse Crossing at the Bösebrücke Bridge – one of the most infamous crossings between East and West Berlin – where about 200 metres of the graffiti-covered wall remains.

Anyone watching the news on the night of 9 August 1989 might remember this bridge serving as a backdrop for the thousands of East Germans pouring over the border, unrestricted for the first time in nearly half a century. Photos from that historic night stand along the bike path.

Another kilometre on is Mauerpark – which literally means “wall park” – where other wall remnants have also become a popular graffiti canvas, thanks to an open invitation from the city to artists to make their mark.

Part of Berlin’s rebirth since Germany’s 1990 reunification has been to attract artists of every stripe; the very wall that once cast a dark shadow over freedom of expression has now become a place for creativity.

At the Bernauer Strasse divide, one of the highlights of the Berlin Wall tourist trek, East Germans lived quite similarly to their Western counterparts.

During the early years of Allied and Soviet occupation, they could cross the street to pick up Western newspapers in what was technically a different country. However, as time went on, crossing this street became increasingly dangerous.

When construction of the wall began along Bernauer Strasse in August 1961, people started to panic. Those who lived on the first floor were able to simply run across the street to freedom. Others living in higher floors would jump out of the window.

The list starts with Ida Siekmann, who perished when she leapt out of her third floor apartment on to Bernauer Strasse. She died en route to the hospital from her injuries. It ends with Winfried Freudenberg, who died in 1989 after a failed escape via a homemade balloon.

“I remember these people being killed as part of my childhood,” Möllering grimly noted. “It was always kind of present.”

The stories continued to pile up as he led me through the streets and parks of Berlin.

Here was the desolate pile of broken headstones left by the GDR when they had to build over a cemetery; there was the former guard tower, memorialised and maintained by the still-living brother of someone who was left to drown in the adjacent Spree River during an escape attempt from East Berlin.

Where to cool off in Berlin. Berlin’s Best Lakes For Sunbathing & Swimming

Travel the city like a local. A Local’s Guide To Berlin

From Checkpoint Charlie To Brandenburg Gate

We sped across Checkpoint Charlie, formerly the most popular crossing point between East and West and now a favourite tourist spot.

But Möllering had to pause when we reached the Brandenburg Gate, one of Germany’s most recognisable landmarks since its completion in 1791. Napoleon passed under the Neoclassical arch in 1806 and US president Ronald Reagan gave one of the most famous lines of his presidency here, challenging Gorbachev to “tear down this wall!” 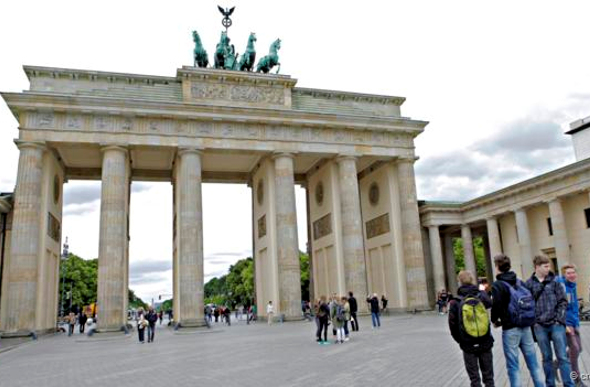 Prior to 1990, East Germans had been kept away from West Berlin’s Brandenburg Gate – nor could West Germans pass through as a checkpoint blocked the route. For Möllering, cycling through the gate is something he will never tire of simply because he can do it.

The trail continued through the city streets until the sight of a cow signalled that we were in the German countryside. Although the circular trail follows the entire 160 kilometres outline of the wall, we were turning off in the Lichtenrade district to take the train back to the centre of Berlin.

“You’ll notice that the forest on the right side is older than on the left,” Möllering said. The left side – in East Berlin – had been destroyed when the GDR put up the wall.

The paved path sliced through the dense forest with an unseasonably cool summer wind bringing goose bumps to our skin. “Hard to believe this was once one of the most militarised borders in the world, right?” Möllering asked.

He was right. I couldn’t imagine pedalling the Pakistan-India border where they take pride in their militarisation with daily rituals between the two armies; nor could I fathom going for a two-wheeled jaunt through the demilitarised zone between North and South Korea.

It all seems like a complete impossibility – just as it would have to any Berliner if you suggested cycling the Berlin Wall 25 years ago.

Visit your local Flight Centre store or call 131 600 for more advice and the latest deals on travelling to Berlin.

This article was written by Joe Baur from BBC and was legally licensed through the NewsCred publisher network.