A Slice of Brooklyn - Taking a Pizza Tour of New York

A Slice of Brooklyn - Taking a Pizza Tour of New York

Ten years ago it never would have occurred to me to venture over the bridge to Brooklyn. Isn't that just where people from Manhattan move after they have kids a'la Miranda Hobbs from Sex and the City? Since that time though, it's not just Miranda that has made the move to Brooklyn. The New York borough is now a hotspot rivalling Manhattan complete with celebrity residents, million dollar realty and hip-and-happening shows like HBO’s Girls. It's also where you'll find the best pizza in the city, best experienced, as I found out on my recent trip to New York, on the highly popular Slice of Brooklyn pizza tour. 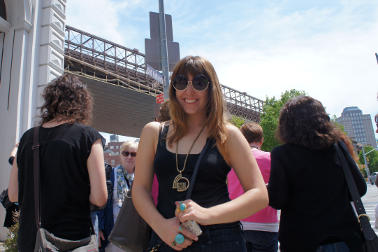 With the motto 'Manhattan? Forgedda bout it!' the Slice of Brooklyn pizza tour isn't just a food tour. It's an all-out-Brooklyn experience complete with unique history, pop-culture references (many of which are played on state of the art TV screens) and a personal touch thanks to our tour guide Paula, a bubbly half Jewish, half Italian catholic Brooklyn local with a genuine accent to boot.

Beginning with a full bus-load of travellers in Manhattan and a drive over the Manhattan Bridge, the first stop is DUMBO which stands for Down Under the Manhatten Bridge Overpass. While the name might sound strange, Paula tells us that this pocket of Brooklyn is home to some of the most expensive real estate in New York (Anne Hathaway is a resident) and one of the best pizzeria’s in New York - Grimaldis. Skipping the line, we're ushered in to an intimate room of red and white checked table clothes and a group of chefs busily pounding dough right in front of us.

What makes Grimaldi's 'pizza pies' so popular is it is one of the few surviving pizzeria's that still uses a coal-fired oven, giving the dough a unique crispy texture. To make the most of my first Brooklyn meal I dig into a piece of signature Margherita pizza, washed down with an old school black cherry soda.  With a meal like this it's no wonder Anna Hathaway and the hipsters are flocking to DUMBO in droves. Not to mention the view of Manhattan, which we soak up from Pier One Park after our meal. 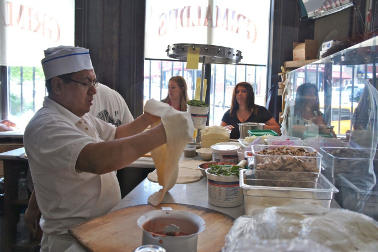 Preparing the dough at Grimaldi's

Back on the bus and we're well and truly Brooklyn advocates now. We drive through the area where Paula grew up, past the house where Joe Pesci got 'wacked' in Goodfellas and passed some impressive mansions which Paula has all the goss on, from mobster Bugsy Segal's old hood to the Bensonhurst neighbourhood where the famous Saturday Night Fever strut took place.

After watching a few famous movie clips and then driving by the exact location where they were shot, I'm now cottoning on to why so many have their eyes on Brooklyn. It's got a lot of character, quirky accents, oh and fantastic food, which I got to tuck into again at L & B's Spumoni Gardens in the Boondocks of Brooklyn. Family owned and operated since 1939, the restaurant leans on the Sicilian style of things, with an ice cream parlour attached to the front. While its decor alone is enough to make them look like they know what they doing (think Godfather-gaudy), the proof is in the pudding, or in this case, pizza pie.

As Paula tells us, the L&B difference is that they pour the sauce on their deep-dish pizza last, making it extra saucy and thus extra delicious. After eating a serious amount of Sicilian pizza, I headed outside to the bench seating for a taste of the pistachio spumoni, a type of ice cream created using actual cream - an obvious-yet-life-changing combination.

After leaving with more kilos than what I had arrived with, the next stop on the tour was luckily Coney Island, where I tried to walk off some calories on the boardwalk while taking in the stunning view. Who knew Brooklyn had a beach? Not to mention a wooden roller coaster that dates back to 1927. Just the thought of it gave me the shivers, not to mention the thought of riding it with a stomach full of pizza and spumoni. I opted to take a few snaps instead and then it was time, sadly, to return to Manhattan via an interesting drive through little Russia.

On the ride back a roll of celebrities from Brooklyn played, from Adam Sandler to Steve Buschemi, Barbara Streisand and Jay Z. Turns out it's not just a sleepy borough full of middle aged Manhattenites. Brooklyn is happenin. And I'm eager to be about of it again. Manhattan? Fuhgettaboudit!