Why Art Lovers Are Swept Off Their Feet In Italy

Why Art Lovers Are Swept Off Their Feet In Italy

While it’s no secret that some of the world’s most renowned works of classical art originated in Italy– think Michelangelo, Da Vinci, Botticelli – there’s also an abundance of modern art, performance art, architecture and everything in between. No matter what style of art makes you swoon, here’s where to find it. 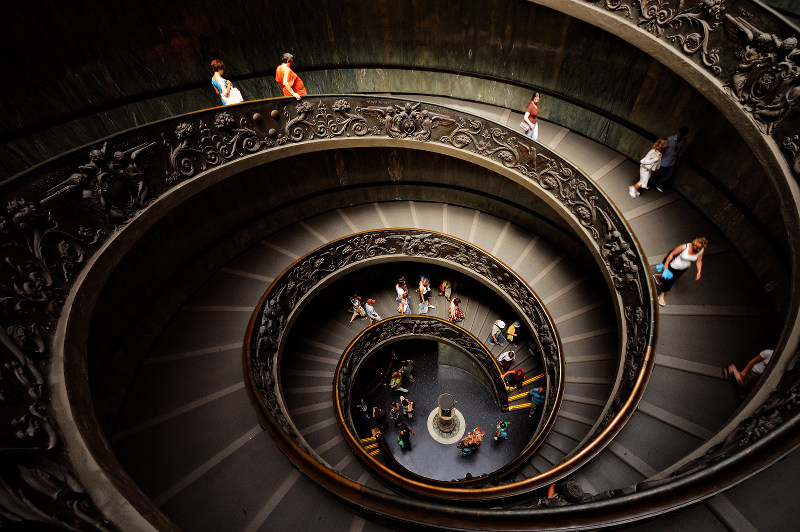 Helicoid staircase in the Vatican Museum, which is a piece of art in itself.

If it’s the classics that take your fancy, you’re in luck, as Italy is packed with Renaissance artworks almost everywhere you look. You’ll find them in almost every basilica, historic villa, castle or museum you come across. Popular museums such as the Uffizi Gallery in Florence house some of the most famous masterpieces of Western art, including notable works ranging from Da Vinci and Botticelli to Michelangelo and Caravaggio. And no trip to Italy would be complete for any art lover without  a stop in Vatican City to see classical sculptures, tapestries and even more Renaissance art (Italy was the birthplace of the Renaissance, after all), along with the Sistine Chapel with its once-in-a-lifetime view of the ceiling adorned by Michelangelo.

In the Vatican Museum, among an enormous collection of religious art, many visitors are surprised to find works by the like of Marc Chagall, Paul Gauguin, Paul Klee, Wassily Kandinsky and several other more modern artists.

If visiting Milan, a stop at the Basilica di Santa Maria delle Grazie is a must. There you can lay your eyes on Da Vinci’s ‘The Last Supper’, unexpectedly larger than most assume and not displayed in a museum at all; it’s located in the monastery dining hall. 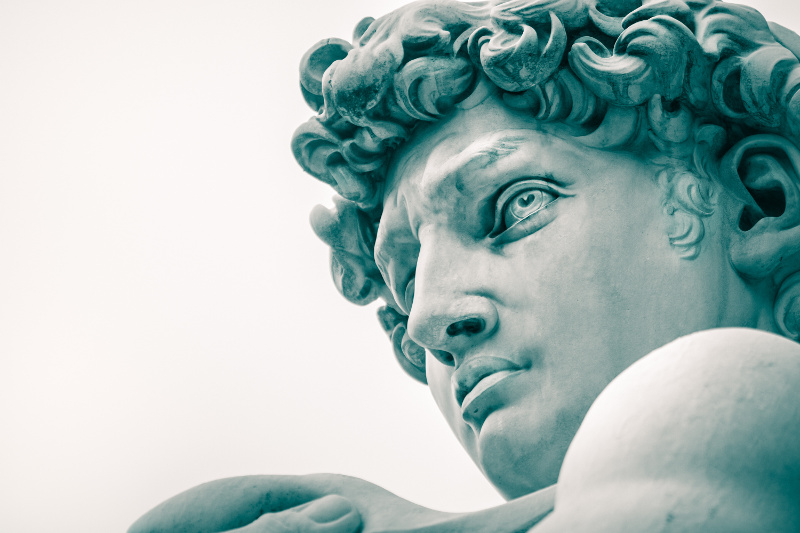 Michaelangelo’s statue of David is one of his most famous works, in Florence’s Galleria dell’Accademia.

For those keen on modern art, Venice is an ideal destination as it’s the home of the Art Biennale that takes place in odd-numbered years, bringing thousands to the city to enjoy some of the most influential and cutting-edge artists from around the world. If you aren’t in Venice during the Biennale, make sure to visit the Peggy Guggenheim Collection along the Grand Canal, where you’ll find her private collection of works by prominent Italian futurists as well as pieces by Picasso, Duchamp, Kandinsky and more. There are also a few artworks by Guggenheim’s former husband, Max Ernst.

While most people go to Florence for the Renaissance art, there’s still a rich culture of nurturing contemporary artists, and as such the city has several smaller but still-impressive galleries. The Gallery of Contemporary Art is located on the second level of Pitti Palace and is well worth a visit, and many of the museums, such as the Galleria dell’Accademia (where you’ll find Michelangelo’s sculpture of David) and the Palazzo Vecchio, have frequent contemporary art exhibitions.

In Rome, MAXXI (the National Museum of 21st Century Arts) is a tribute to both modern arts and architecture over two separate spaces and has a healthy permanent collection of modern pieces. The building is a drawcard in its own right; designed by arguably the world’s greatest female architect, Dame Zaha Hadid, it is considered one of her most notable works. 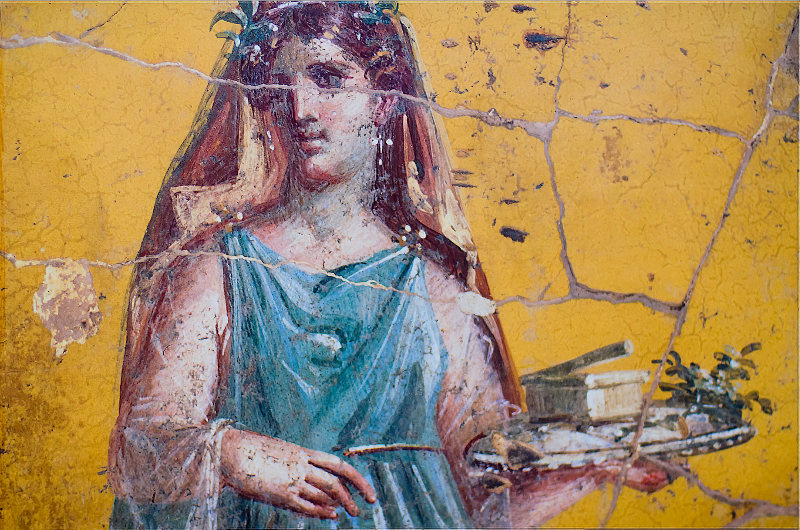 Detail of just one of the many Roman Frescoes found in Pompeii.

History buffs will be in their element at Italy’s archaeological sites, marvelling at the mosaics and frescos that have survived not just the centuries but, in the case of Pompeii, natural disasters. Murals and frescos in Pompeii and Herculaneum date from 50–79AD and provide an interesting perspective on village life before the eruption of Mt Vesuvius, during which most of the city (including all its paintings) was destroyed. Don’t miss visiting the House of the Vettii in Pompeii for some remarkably restored murals and the mosaics among the ruins of Ercolano in Herculaneum.

In northern Italy’s Piedmont region, the Castello della Manta houses noteworthy frescos that are rare samples of Late Gothic painting in Italy. Painted anonymously, the artworks, which ornately fill the room, were created in about 1420 and portray the Nove Prodi (Nine Worthies) with their female counterparts.

For a contemporary twist on historic murals that can be compared to modern-day street art, visit the murals in Sardinia’s Orgosolo. These are currently being investigated for their historical and anthropological significance following their emergence in the 1960s. Hundreds of these murals adorn buildings and natural landscapes, and  if you’re travelling off the beaten path  to Sardinia, they’re well worth a look. 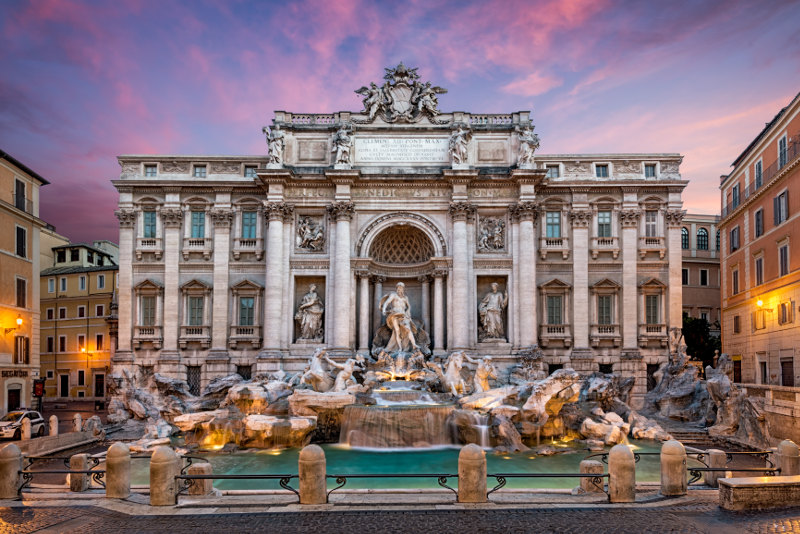 It’s said that if you toss a coin into the Trevi Fountain in Rome, you’re sure to return.

No matter where in Italy you travel, the architecture of the buildings is hard to overlook. The arches, domes, piazzas, basilicas and castles make it hard to know where to begin. Luckily, you’ll find incredible buildings everywhere, particularly in Rome with its ancient ruins, the Colosseum and the Pantheon (which has gone on to inspire many government buildings worldwide, most notably the US Capitol Building in Washington DC).

Also in Rome, Trevi Fountain is a must-see for fans of baroque architecture (or simply fans of beautiful landmarks). The iconic fountain has recently undergone a €2.2 million (A$3.27m) restoration sponsored by Italian fashion label Fendi and is now looking better than ever.

Tivoli’s Villa Adriana is another that’s worth exploring, with its exceptional buildings constructed for the Roman Emperor Hadrian. Additionally, the famous Tower of Pisa, Venice’s Doges Palace and a wealth of other buildings throughout the country offer examples of everything from classical to early medieval, Gothic, Renaissance and baroque architecture. Indeed, there’s something for every building buff. 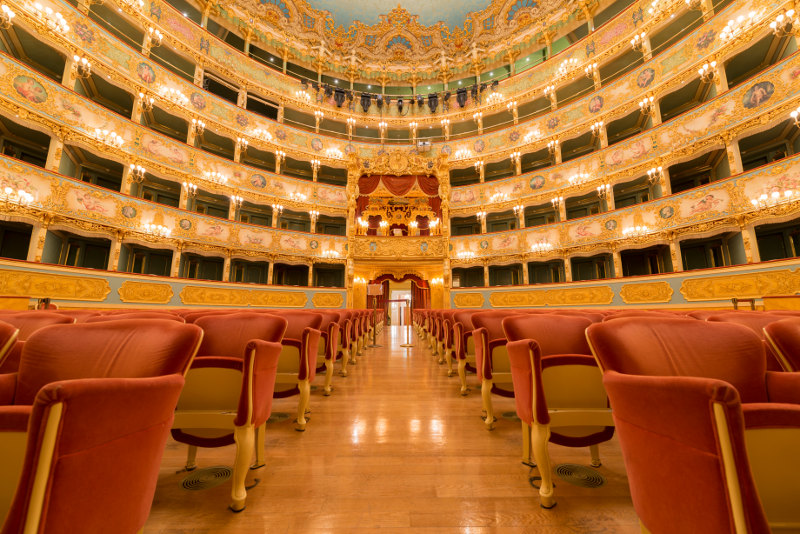 More of a culture buff? Italy has an abundance of ornate theatres where you  can experience the best in performance art  – opera, dance and music – including the Teatro La Fenice in Venice, which is such a sight to behold that it’s worth booking a tour in advance. However, if you really want to experience the hall as it was intended to be used, attend an opera any time from January to July or in September to October, when opera season takes over the venue.

Film buffs also flock to Venice for its International Film Festival, which is the oldest in the world and is held as part of the Venice Biennale. At this time local theatres fill with independent films and seasonal outdoor cinemas pop up in the piazzas. Film aficionados take note: the National Museum of Cinema is also in Turin. Since its opening in 2008 the museum has hosted an enormous permanent collection and temporary touring exhibitions of film posters, vintage film equipment including pre-cinematic viewing devices, vintage props from old Italian movies and much more to discover over five levels.

Born in the United States and bitten by the travel bug early in life, Gwen O’Toole is a freelance writer and published author who has been fortunate enough to travel the globe before settling in Melbourne, Australia.
more articles from this author