There are many things we associate with Berlin: Hitler’s bunker, the Brandenburg Gate, cultural splendour on Museum Island, Sir Norman Foster’s dazzling Reichstag dome – and of course the coolest clubbing spots on the planet.

But lakes and swimming and beachside lounging in leafy green pastures? It seems unlikely, and yet throughout Berlin’s often heavy history runs a thread of bucolic peace: water.

Sometimes within spitting distance of the clamour of motors and sirens, sometimes on the very perimeter of greater Berlin, lie the city’s aquatic jewels. They comprise a network of 80 or so lakes that together make up just a fraction of the 3,000 lakes to be found in the surrounding region of Brandenburg.

At some of the lakes a small fee is charged for admittance to a strandbad offering everything from those wonderfully solid wicker chairs so beloved of the Germans (the strandkorb), to ice-cream stalls, open-air sausage grills, playgrounds and – of course – beer vendors. It’s a blissful cross between a fairground and the Riviera.

A trip to a Berlin lake is a uniquely refreshing, soul-enhancing thing – and it’s also what keeps Berliners in the city during what can be very hot summers. Here are six of my favourites:

Located in the far east of the city, the Muggelsee (also known as the Grosser Muggelsee) covers 7.4 square kilometres, making it the largest of Berlin’s lakes.

It has a wild and sandy edge, with wooded walkways; a party boat that rocks with dance beats as it steams from shore to shore; a lakeside sauna; and a massive strandbad with an 'FKK' section for those wanting to sunbathe in the nude.

On a hot summer’s day, find yourself a bit of shady sand by a tree, lay out your towel among the picnickers and wade on in. This lake is good for those who aren’t confident swimmers as the first 100 metres are only thigh-deep; eventually, though, it turns into a deep, clear, cold and sometimes fast-flowing body of water. 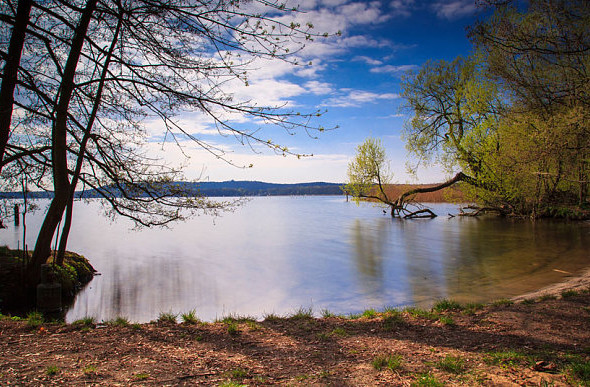 The Muggelsee is Berlin's largest lake

Take the S3 from Ostkreuz to Friedrichshagen, then walk about 25 minutes down Bolschestrasse and Muggelseedamm (or cut through the woods) to the lake perimeter. Alternatively, take the seven-minute tram ride between Friedrichshagen S-Bahn and Muggelsee Strandbad.

Located in the far west of the city, the Schlachtensee is the southernmost of the chain of lakes surrounding the Grunewald (Green Forest) and is one of the most picturesque (for its kidney shape), celebrated for the high quality of its silky, cooling water.

It is easy to get to – just seconds’ walk from the S-bahn stop named after it – and it has a party vibe.

Most people sunbathe on a green, which starts with a large flat section over the road from the S-bahn station and leads (quite steeply) down to the water, though many also head for the lake’s lush perimeter with its selection of shaded micro-beaches.

But the slope is a more reliable suntrap and has a jaunty atmosphere, thanks to a combination of boisterous teenagers, solo novel-readers, parent-toddler outings, and chatting girlfriends.

There’s no strandbad with shops and cafés, so people tend to buy beers, sausages, chips and ice cream from Seestern, and a biergarten. 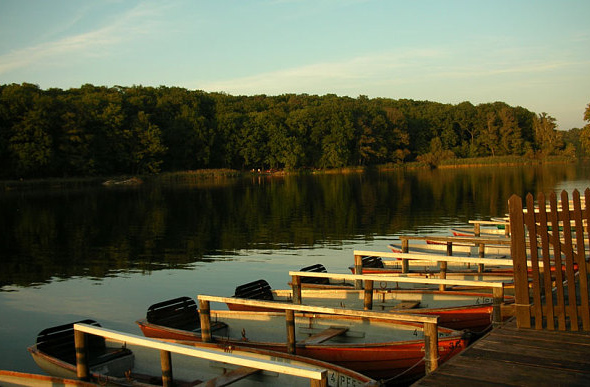 Schlachtensee is just seconds from the S-bahn stop

Take the S1 to Schlachtensee (30 minutes from Potsdamer Platz).

An odd but delightful little lake, Plotzensee – which shares its name with the nearby prison – was bought from a Spandau monastery by the city of Berlin in 1817, and its banks have been used ever since for a range of recreational activities.

It is very central and curiously quiet on weekdays, particularly if you go early. Here, too, you can find snack bars and terraces; a playground on the beach; hefty beach chairs complete with sun-shielding hoods; and a beach for nudists.

The only catch is that the lake isn’t the clearest: by mid-July the water goes a bit green and murky, though it maintains high health and safety standards for swimming.

Plotzensee has a range of activities and is busy on weekends

Take the S-bahn to Westhafen or Beusselstrasse.

Possibly the most idyllic lake in Berlin, Krumme Lanke is on the edge of the Grunewald forest and served by its own U-Bahn station.

Its undulating banks are framed by tall willow trees and healthy marshes. Thanks to its curvy shape, it has numerous sunbathing nooks, from sandy beaches staggered over log steps, to numerous smaller bays.

The lake attracts a fairly boisterous crowd in summer, including the students of the nearby Freie Universität, as well as families. The main beach has some changing facilities and an imbiss (snack hut), but this is a place to bring a picnic. 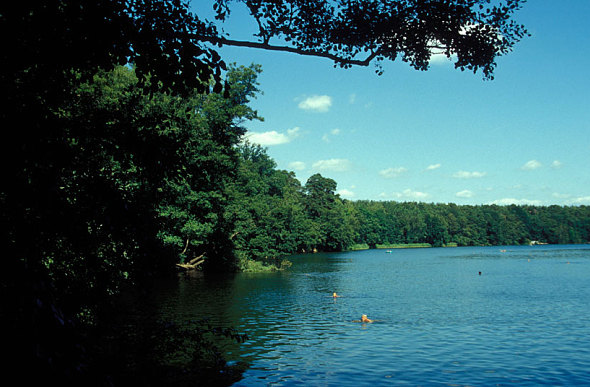 Krumme Lanke is popular with students

Take the U3 to Krumme Lanke.

The best-known lake in Berlin, this enormous, yacht-club-rimmed expanse of water occupies a prime spot in the far western part of the city and is actually closer to Potsdam than to the heart of Berlin.

The bigger of the Wannsee’s lakes ('Grosser Wannsee') is without doubt the number one all-singing, all-dancing beachside location in Berlin and its buildings are a fine example of the functional New Objectivity style popular in the late Twenties.

And with its white sand imported from the Baltic coast, there is plenty of scope for fun in the sun. At 355,000 square metres, Wannsee beach has space for 30,000 bathers as well as numerous dining and snack options, boat rental, a high-octane playground with a water slide, a range of chairs and strandkorb shelters for rent and, needless to say, a nudist zone. 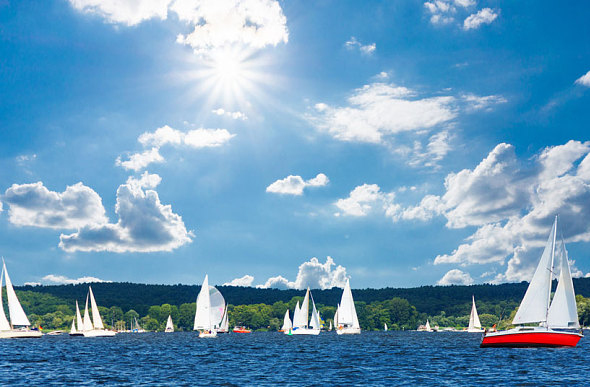 Take the S1 to Wannsee; the 10-minute walk to the beach is clearly signposted.

Tegeler See, formed out of a bulge in the Havel river, is located in the north-west part of Berlin, close to Tegel airport.

It has seven islands, and in addition to swimming and sunbathing offers steamboat rides, surfing and sailing. Nearby is the splendid Villa Borsig, well worth a visit. 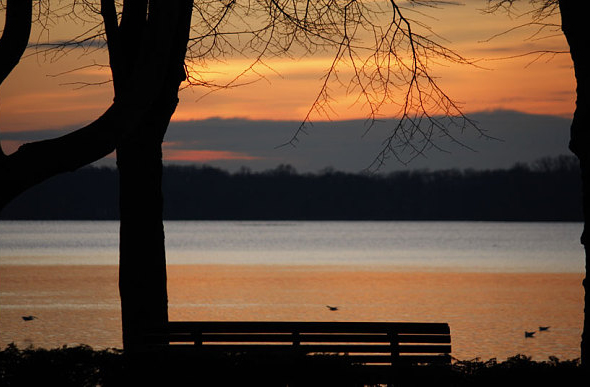 Take the U6 to Holzhauser Strasse, then the 133 bus towards U Haselhorst, alighting at Wassersportclub.

Visit your local Flight Centre store or call 131 600 for more advice and the latest deals on travelling to Berlin.

This article was written by Zoe Strimpel from The Daily Telegraph and was legally licensed through the NewsCred publisher network.