For many of us, childhood included that unrelenting dream to live in a treehouse in our own abode above the rest of the world. It seems that desire was not lost on a few creative souls who have built some of the most luxurious and comfortable treehouse hotels around the United Kingdom.

If you still harbour a similar ambition or simply want to escape to nature for a while, you might want to investigate one or more of the following holiday treehouses, considered the best in the UK. 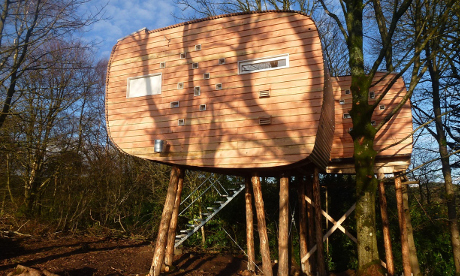 A nature haven popular with couples

Earlier this year we tipped Brockloch Treehouse among the best new places to stay in Europe in 2015.

It has been six months since the snug modernist masterpiece opened and it’s already become a popular spot for couples looking for an architecturally fascinating nesting place. It’s the second place Brockloch has commissioned from designer Sam Booth, and although there weren’t any plans to expand beyond two units, the owners admit they’re already tempted to see what Booth can come up with next.

The off-grid treehouse is designed for people to unwind: there’s no TV or Wi-Fi; small windows cut into the walls allow residents to peep out at the forest around them. 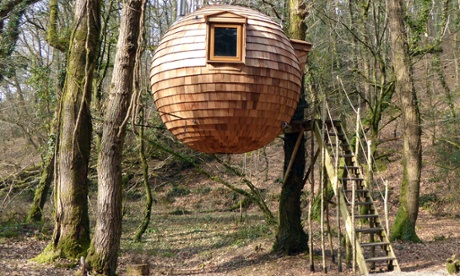 The surreal-looking Lost Meadow Treepod is a cedar-clad ball suspended between two trees in a north Cornish woodland.

Accessible via a staircase, the pod contains a cosy bedroom with a woodburner. A kitchen hut and fire circle can be found just below. Nearby is a small river (complete with stepping stones) and a meadow for games and picnics. 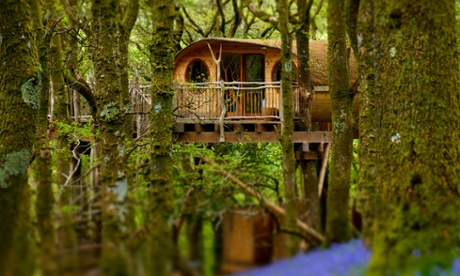 With it’s wooden walkways high above the forest floor, this impressive treehouse complex brings to mind the Ewok village from Star Wars (especially at night, when the welcoming lights glow in the darkness).

For a kid, this is probably as good as holiday accommodation comes, but even for adults this place is exciting. Families have plenty of room for adventure; the main living space has a double and bunk beds to sleep four, while there’s a second living-dining space attached – all 10 metres above the ground.

Rough it in comfort. 10 UK Glamping Sites That Remember To Pack The Luxury 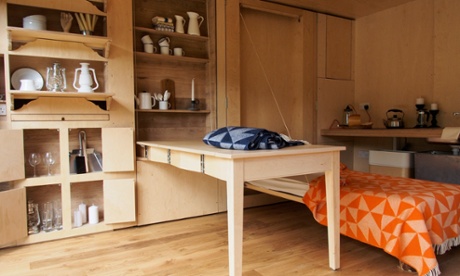 Inside the Sky Den

Created by architect George Clarke (of George Clarke’s Amazing Spaces fame), in collaboration with designer William Hardie, the Sky Den is a beautiful, albeit bizarre, treehouse project in the Kielder Water and Forest Park.

The piece de resistance (and this is not an overstatement) is the rooftop, which unfolds like a pop-up book, leaving guests standing with their heads in the clouds. 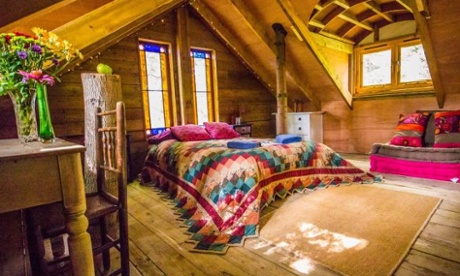 Four beautifully appointed treehouses stand on the site of West Lexham Manor, perfectly suited for anything from a romantic hideaway to a family holiday.

Sunrise, the biggest of the collection, has two bedrooms and a terrace looking out through the forest, while the Tinker makes a colourful home for two.

The bright decorations throughout create a festive atmosphere – multi-coloured bunting hangs from the ceiling above patterned beddings, while fairylights and woodburning stoves keep things feeling magical at night. 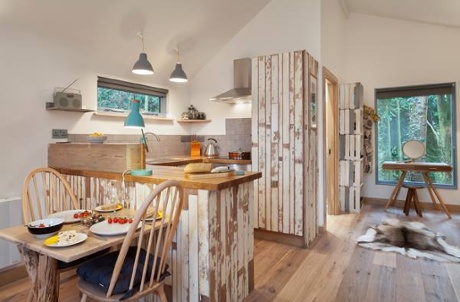 Quaint furnishings inside The Birdhouse in Somerset

New for 2015, the quaint name of this bolthole belies the fact that this is actually an incredibly chic and sophisticated place to stay.

The stilted treehouse, made from local cedar, stands on the edge of a forest glade. Inside is a modern flat with all the bells and whistles you’d more likely associate with a swish urban Airbnb: HDTV, rainhead shower, stainless steel German kitchen appliances and a handmade wooden dining table.

This truly is another one of those luxurious glamping spots that cater to people who hate camping. And with the award-winning gastro pub The Lord Poulett Arms just a mile away, you could argue it caters for people who hate cooking too. 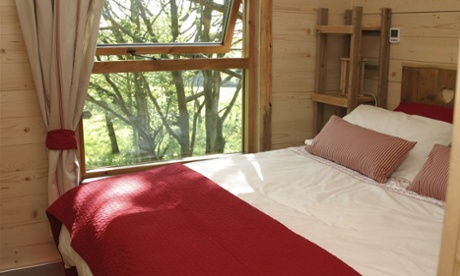 Some views are better to wake up to

Another luxurious treehouse, though this fancy offering on the Isle of Wight is a little more “woody” and a lot less “TV-y” than the aforementioned Birdhouse.

The accommodation consists of a living house, with a kitchen, dining table, sofa and woodburning stove, while the sleeping house has two bedrooms, including a bunk room with a mezzanine the kids can argue over.

Both houses are mounted on stilts and connected by a decking area providing plenty of space for families. 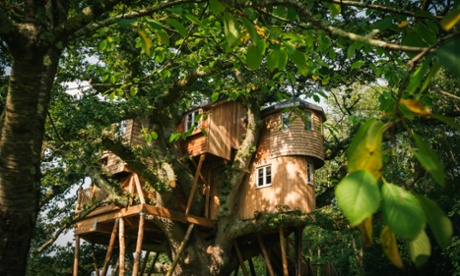 There are some places that describe themselves as treehouses but aren’t even built up a tree – but this place is most definitely not one of them. It is an ambitious construction fitted between the boughs of a 250-year-old oak tree.

The surprisingly spacious apartment is described as a “warren of interconnected rooms”, with an impressive freestanding bath tub among the luxurious fittings. 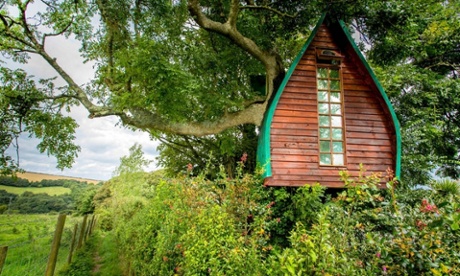 This magical Tolkien-esque treehouse (it’s already had an honourable mention on our list of worldwide Hobbit homes) is a snug one-bedroom abode in an ash tree.

Among the more unusual offerings you’ll find on Airbnb, the Tree Sparrow house has views over Falmouth Bay, and Porthallow beach is a 10-minute stroll.