Hunting The Blue Yeti Of Bhutan

Hunting The Blue Yeti Of Bhutan

On a clear day, the entire Jomolhari Range – including Bhutan’s second highest peak and one of the country’s most sacred places – should be visible from where I was standing. But on that cold and gloomy June afternoon, all I could see were a blinding mist and grey skies.

I was on the 3,780-metre Chele La mountain pass in west Bhutan, and despite the ominous monsoon weather, my guide Raj Lama sent me hiking up yet another trail to try to get a better view.

I was not impressed, and I let him know. 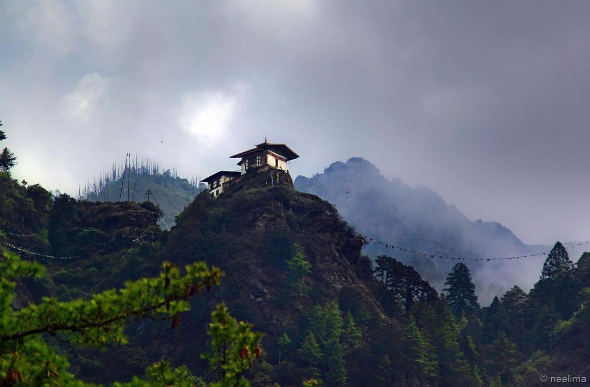 Lama and I often argued during my week-long stay in the Himalayan Kingdom. One of our first arguments, in fact, was over Lama’s belief that Indian girls are not good hikers. I proved him wrong, trekking to the Tiger’s Nest Monastery with considerable ease the previous day.

And in a “watch-what-you-wish-for” moment, that’s how I ended up on a nondescript trail with obscured views that afternoon, fielding subsequent prompts to hike every possible trail around.

But as it turned out, the constant bickering had an upside: it led me to one of the rarest flowers on Earth.

Bhutan’s national flower, Meconopsis Grandis, or Himalayan blue poppy as is it popularly known, is a flower so enchantingly blue that it instantly commands undivided attention.

Growing only above the tree line in a harsh high altitude environment of 3,500 to 4500 metres, it blooms just once during the monsoon between late May and July, after which it disperses its seeds and dies. 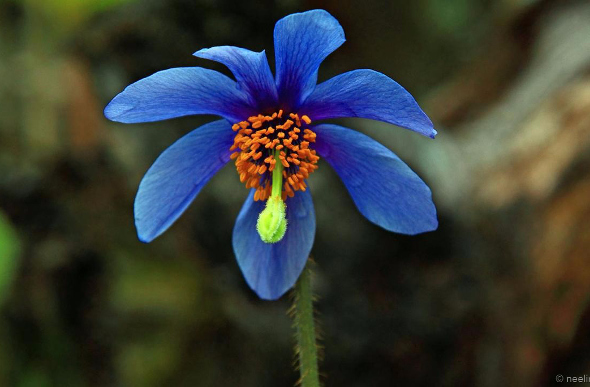 This bloom is so rare, in fact, that it was once thought to be a Himalayan myth, like the Yeti. Its presence in Bhutan was only confirmed in 1933 by botanist George Sherriff, and to this day, it evokes similar intrigue to the snow leopard – the ghost of the Himalayas.

As I reluctantly trudged my way further up the misty mountain towards the western ridge above Chele La, hundreds of large white Darchor prayer flags fluttered in the fierce winds that buffeted the exposed slopes.

The lush pine forest that covered every inch of these pristine mountains had been cleared here. Instead, small and dense shrubs packed the landscape.

Walking along the trailside, annoyed at my cold, wet mission, I suddenly noticed a profusion of orange and yellow bell-shaped blooms growing on dwarf rhododendron bushes.

As I traipsed on, I found myself gaping at thousands of those same flowers drooping gracefully from the hundreds of shrubs that lined the entire slope. 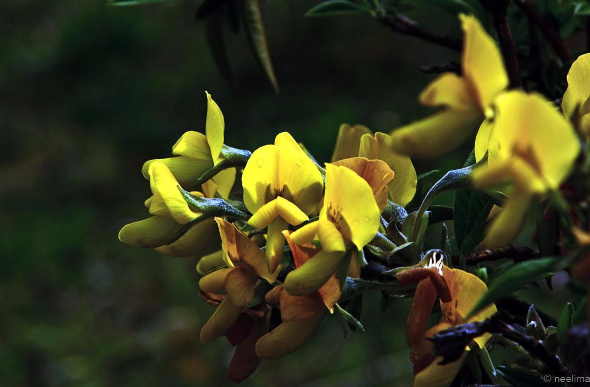 When I turned my gaze away from the rhododendrons, vivid bursts of yellow, white and purple caught my eye: I had just walked into a patch of primulas and primroses. To my right, bright yellow piptanthus contrasted the dull sky.

For the first time since arriving in Bhutan more than five days ago, the opulence of the country’s floral diversity was apparent. Of course, I should have expected nothing less from a Himalayan Kingdom that has set aside 60 per cent of its land as protected nature reserves.

I have always been an ardent admirer of wildflowers. To me, the blooms epitomise the untamed elegance of nature and remind me of my childhood dreams full of meadows carpeted with colourful blossoms. Lost in this reverie, I trod lightly in an attempt to not crush any of these delicate beauties – when a bright burst of blue stopped me in my tracks.

All Anger Dissolves In A Sea Of Blue

Obscured under a thick shrub between the wildflowers, a large cerulean bloom with a dazzling amber core hung delicately from a 60-centimetre slender green stalk. Its fragile beauty and unexpected hue startled me. The blue was as deep as the late afternoon Himalayan skies on a bright sunny day.

There were at least 10 more such flowers around, some fresh and others more withered, but the colour of the petals was striking on them all.

As I gazed on, time passed as though in a dream. Without even realising, I had already spent close to an hour engrossed in my serendipitous encounter. 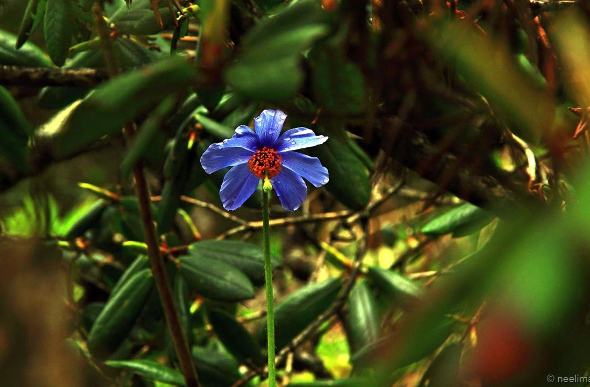 The flower so few will ever find (Image: Neelima Vallangi)

All annoyances forgotten, I cheerfully scampered back to the road where Lama was waiting, without an inkling of the rare privilege I had been blessed with.

At that point, I had no idea it was the Himalayan Blue Poppy. I was just captivated by the intense colour, an effect I later learned it is often known to have on unwitting observers.

As much as I enjoy wildflowers, I have little knowledge of them and simply take pleasure in their fleeting beauty. To me, a blue poppy could have been just as enticing as an orchid. But of the many beautiful flowers that grew in that small patch, none held my attention for as long as the blue poppy did – a true testament to its inescapable allure. 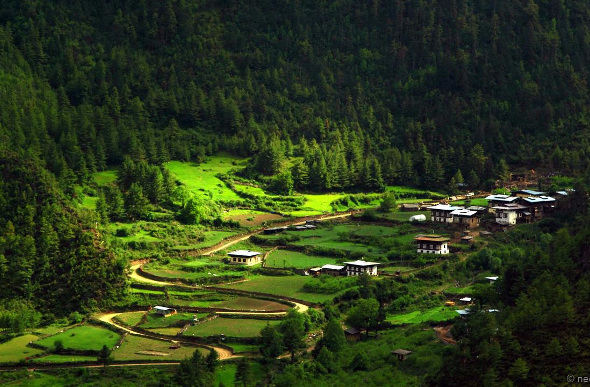 The Haa valley where realisation sets in (Image: Neelima Vallangi)

Later that evening, when we arrived at Haa Valley on the other side of Chele La, I read up on the flower and learned about its significance.

When I learnt how uncommon it was to spot a Himalayan Blue Poppy in the wild, I couldn’t help but smile at the strange quarrels with my guide and the incredulity of the circumstances that landed me at that exact location at exactly the right time.

I’d found the mythical Himalayan Blue Poppy in a country steeped in mysticism.

Visit your local Flight Centre store or call 131 600 for more advice and the latest deals on travelling to Bhutan.

This article was written by Neelima Vallangi from BBC and was legally licensed through the NewsCred publisher network.