Bornholm used to be a bucket-and-spade place, where almost everyone in Denmark decamped to in the summer; the rich to their summerhouses and the elegant Badehotels on the north coast, everyone else to the caravan parks and sandy beaches of the south.

To Danes from Copenhagen, with its pancake-flat surroundings, the Baltic island’s rolling hills and steep cliffs made a welcome change, while its location – 32 kilometres from Sweden and closer to Poland than to the Danish capital – made it feel like an exotic destination.

But the advent of low-cost flights to places like the Canary Islands and Thailand in the 1980s changed all that. And Bornholm has had to reinvent itself.

First, it became a 'gourmet island', home to Kadeau, the celebrated restaurant of the local Michelin-starred chef Rasmus Kofoed who won the Bocuse d’Or in 2011, as well as Denmark’s most prestigious chefs’ competition, Sol over Gudhjem.

Now the island’s big ambition is to be 100 per cent green by 2025 – a carbon-neutral community based on sustainable, renewable energy.

The latest venture is the Green Solution House, the world’s first 'cradle-to-cradle' (C2C) hotel, built with reusable or biodegradable materials, which was officially opened by Denmark’s Crown Prince Frederik in April. 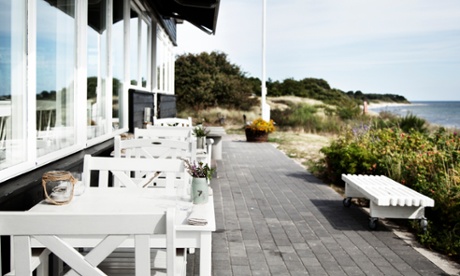 Bornholm is also where the iconic Christiania cargo bikes are made, and its biggest reinvention has arguably been to turn itself into a cycling paradise.

Since 1981, it has rolled out northern Europe’s largest network of cycling routes: 240 kilometres of paths criss-crossing and circling the island, many following forest tracks and disused railway lines far from any traffic.

The local tourism agency estimates that 30,000 cyclists arrive every year. The island’s size – about half as big again as the Isle of Wight – is perfect for a short break or even a week-long biking adventure.

And whatever the Danes might think, it is actually pretty flat. Here are the highlights for a tour on two wheels …

Find out about Jetstar's baggage allowance cuts. Jetstar Cutting Baggage - What You Need To Know 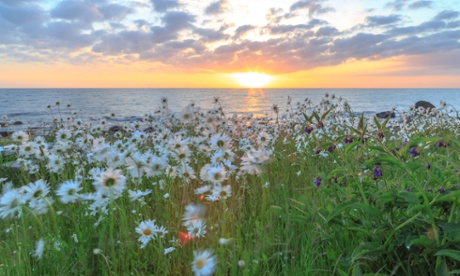 Sunset on the sea … the coastal route is the island’s most picturesque. Photograph: Corbis

For the simple satisfaction of rounding an island, the 102-kilometre coastal route wins out. The start is on forest paths on the west coast, then there is a climb past the ruin of Hammershus castle and the rocky granite cliffs of the north; then it’s over the rolling hills of the interior, with its bright yellow fields of rapeseed, pastures, and Christmas trees, before the path takes you back from the sandy beaches of the south.

The cross-island routes are further from the main roads and, in some cases, they are stunning.

The route between Klemensker and Ro takes you down a narrow fissure valley between steep cliffs. Others cross Almindingen forest, one of Denmark’s largest, where in mid-May the beeches and birch were a vibrant green.

In autumn, the colours are incredible. You could do the round-trip route in a day, but the resort towns of Allinge, Gudhjem and Svaneke, and the pretty fishing villages between them – Teglkas and Snogebaek stand out – are perfectly spaced out for taking it slower, stopping every couple of hours to explore the alleys between whitewashed, low-roofed cottages, feasting on smoked fish, and visiting the sites. 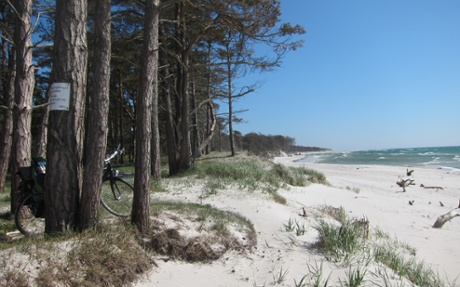 Dueodde is easily the best beach on the island, and possibly the best in Denmark. The sand – almost white and so fine it was used in hourglasses – curves around the island’s south-eastern tip, backed by dunes and pine.

It’s good for swimming, as there’s always deep water close to shore between the sandbars. Be warned though, the Baltic takes time to warm up, so swimming before mid-June is only for the hardy.

Besides the beach, Dueodde has Scandinavia’s highest lighthouse, two German bunkers, and a much-loved ice-cream parlour, Bornholm Softice, but not much else.

I also liked clambering over the rocky coastline in the north, particularly south of Svaneke, where a craggy ledge pushes out some 50 metres into the sea, meaning you can drop immediately into deep water.

Best places for food and drink 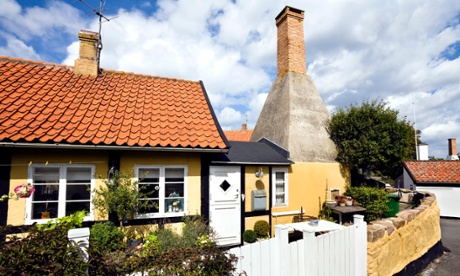 Many old cottages on the island have pyramid chimneys for hot-smoking. Photograph: Alamy

Gudhjem’s smokery is the traditional home of the Bornholm speciality Sol over Gudhjem: a smoked herring fillet on rye bread, topped with radish, dill, a little mound of salt, and a raw egg yolk.

But it’s not the best place to eat it, as most of its herrings are now smoked elsewhere and the yolk seemed like it had come from a bottle.

Instead, I’d recommend the Hasle smokery, the first stop out of Ronne. If you get there for 10.30am, you can watch the artisans dive into the smoky chamber above an open fire and pull out rods hung with golden-smoked herrings, the so-called 'Bornholmers'.

The local hot-smoking technique is the reason many old fishing cottages on the island have unusual pyramid-shaped chimneys.

Eating freshly smoked herring while still lukewarm is special, and at about A$10 not too expensive. You can eat it at tables outside in the harbour as you watch the ferries go out to the tiny island of Christianso.

Gudhjem has often been judged the island’s most beautiful village, and it is a great place to break up a round-trip.

Hotel Klippen, with good food and clean, simple rooms that look down from a clifftop to the waves below, is a good choice. Or if you want to experience a traditional Danish Bathing Hotel, try the imposing StammersHalle Badehotel, built on the rocky coastline in 1911. 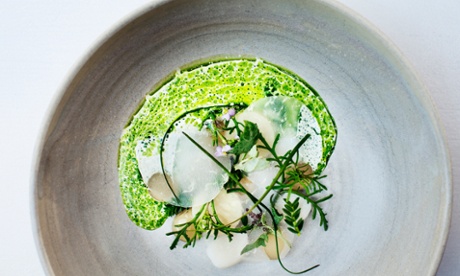 For dedicated gourmets, though, it’s all about Restaurant Kadeau.

Opened eight years ago in the dunes of the south, it was a trailblazer of the New Nordic style, sourcing and foraging its ingredients from the surrounding countryside and sea, with a heavy reliance on forest herbs and berries, pickling and smoking. Pork from the forest pigs, which forage freely outside Svaneke, is a speciality.

If you’re doing the circuitous cycle trip, you’ll be nearly finished when you reach Kadeau, so you’ll deserve it. 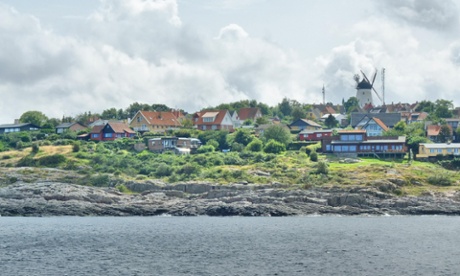 Svaneke is the island’s (and Denmark’s) most easterly town and is slightly less touristy, or at least more upmarket, than Gudhjem. It is also arguably prettier, with handsome old merchants’ houses in the harbour and narrow alleys of half-timbered houses leading down from the town square.

It also has Svaneke Bodega, one of the island’s best pubs, which even early in the season, was lively with locals and tourists. It serves beers from the town’s tiny brewery, Svaneke Bryghus, which include an excellent stout and brown ale.

The town is home to Svaneke Bolcher, where you can watch traditional Danish sweets being made, and Johan Bulow’s inventive liquorice. 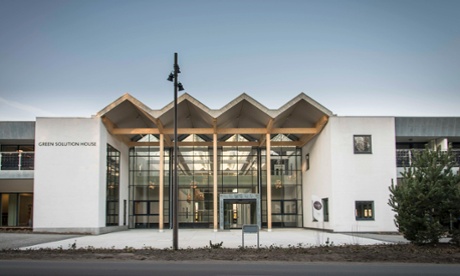 The Green Solution House, which opened in April, seeks to imitate natural systems by using reusable and biodegradable materials.

Copenhagen architects GXN reused glass and bricks from the hotel previously on the site, turning the glass into 'glass wool insulation' and the bricks into foundations.

Waste water is fed into glass cylinders filled with algae, which cleans it before it is used to water the plants. The algae itself is then turned into gas and used to generate electricity, supplementing the solar cells built into the windows and balconies.

But GXN has done all this at the same time as creating a restful, airy space.

The restaurant aims to join Kadeau and Stammarshalle Badehotel in the list of gourmet destinations. The only thing guests may miss is the swimming pool, which has been repurposed as an insulated reservoir storing 80,000 litres of water heated by the hotel’s solar panels.

Hullehavn Camping, five minutes’ drive from Svaneke, has one of the best locations, sheltered by trees and looking out to sea over a rocky plateau broken up with sandy inlets, where you can watch the sun rise in the morning and watch it set at night. 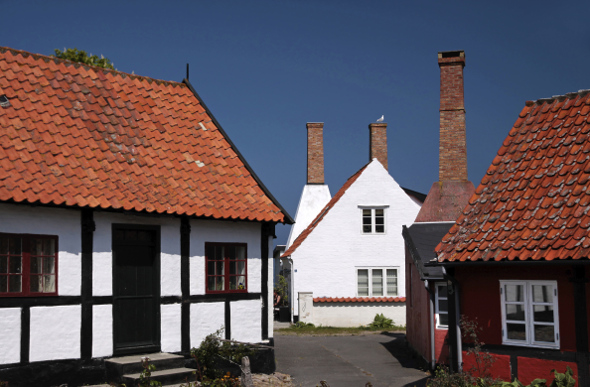 This article was written by Richard Orange from The Guardian and was legally licensed through the NewsCred publisher network.