Free Rolling Through Europe With Busabout

Free Rolling Through Europe With Busabout

I felt overwhelmingly spoilt and pleased with myself. I wasn’t doing anything much. Just sitting on a bench in Vienna and minding my own business. My immediate surroundings were undoubtedly some of the most picturesque sights I’d ever seen, but the real reason I was feeling so happy and smug was because of something else.

It was the 17th day of my ‘North Loop’ trip with Busabout. I was in Vienna after spending far too much time in Berlin with some old friends I had met there. It was never my plan to find Berlin so captivating, with its crazy parties and amazing alternative scene, but I did. And the fact this happened proved to me that I was right about Busabout. It really was the solution to my problem.

My problem could have been put like this: I wanted freedom when traveling, I wanted help and advice on hand, and I wanted a reasonable price. Freedom was a priority because I had a few friends dotted around Europe and most of the more ‘packaged tours’ didn’t let me leave the tour for that long. Busabout did. Independent travelling meant a lot of research and confusion. Busabout didn’t. Here’s how.

My ‘North Loop’ started in Amsterdam. You can start it where you like and end it where you like, but the flight prices made sense for me to go to Amsterdam. It is an incredible city that deserves months of your attention, but for some reason I felt the urge to get going and only stayed there a couple of days. 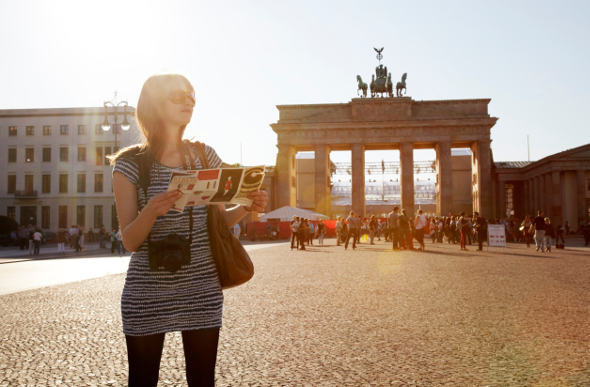 Looking for other tour options? Trafalgar Guide Comes Up Trumps

Find out about the people behind the tours. A Day In The Life Of A Topdeck Trip Leader

On the first bus I had the first smattering of satisfaction about my choice. I had seen the guide and boy did he have charisma! My questions were all completely pointless but he somehow always worked them into very good advice. I don’t like internet/book research and always prefer to talk to someone so this was perfect.

My initial plan was to actually meet my friends in Berlin immediately, but after meeting him and the group I hung around with them a bit first. This decision to be distracted by Berlin was perfectly acceptable to Busabout. There are coaches leaving every second day from each destination so it was easy. It was pretty funny how often I changed my mind about what day I was going to leave on! What did it matter if I spent a little extra time in Berlin? Busabout is all about adding freedom to travel (Getty)

So, at that point in Vienna, on that bench. I was very satisfied. I had made the right choice. The second bus trip had another amazing guide with even more great advice. The drop hostels were always as good as any I have seen travelling. I still had more friends to meet, Paris to see, more time to splurge and Munich was my next stop.  Everything was just overwhelmingly exciting and easy. Busabout will exceed your expectations. Trust me.