Clubbing The Night Away In Barcelona

Clubbing The Night Away In Barcelona

Friday night in Barcelona. It’s still warm, of course, and the city is getting ready to party.

A pair of skateboarders, beers in hand, clatter down Carrer de Ferlandina to join the crowd of kids congregating outside MACBA – the city’s contemporary art museum/skate spot – and the streets are picking up that humid, late-night energy that northern Europeans dream of. Down the road at the Discos Paradiso record store, I’m waiting for Gerard Lopez, the shop’s co-founder and a central figure in Barcelona’s close-knit nightlife scene.

The clean, white-walled store, lined with neat wooden shelves of records, has just celebrated its fifth birthday; during that time it has played a big role in supporting local DJs, producers and promoters. Like everyone else in the city, the shop and its DJ collective, Discos Paradiso Crew, were gearing up for the city’s annual electronic music takeover, Sonar, which took place June 18-20.

The festival, which also sees countless spaces across the city converted into event venues for the unofficial Off Sonar fringe, may last just for one weekend, but the Catalonian capital is a beautiful place to party in all year round, and Lopez is here to point me in the right direction.

During the five years Discos has been open – and since vibrant deep house producer John Talabot rose to global acclaim – Barcelona has become home to a growing number of major electronic artists, with Sinjin Hawke, Zora Jones and Alizzz among them. This, combined with Sonar (plus a tidal wave of tourists), means for some time there’s been a growing interest in Barcelona as a clubbing city. 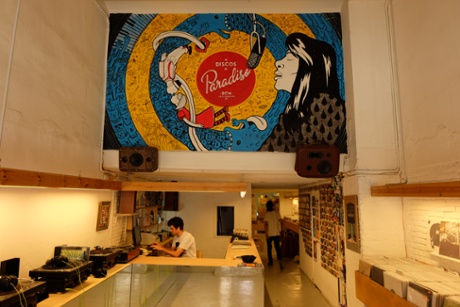 “Compared with other cities – Berlin, Detroit – it doesn’t have a consistent sound,” says Lopez. “But it’s a city that’s fast moving: people are looking around at what’s going on and seeing how we can do it here. Sonar has helped put Barcelona on the map, but during the year there are loads of independent things – people should come check them out.”

We head through the Raval neighbourhood – via beautiful, classic, gold-shimmering bar La Confiteria – to a small venue and community space, Freedonia, where Discos is hosting one of its monthly nights. The low-key space has a vintage feel: brick walls, deep red colours and a small stage backed with neon strip lights.

You have to sign in as a member on entry. As Lopez explains, strict licensing means it’s hard to get permission for parties or to open new clubs in Barcelona – this remains an obstacle for the ambitious scene.

Inside, the bar is friendly and bustling – a place for an easygoing night, or in our case, a warm-up. 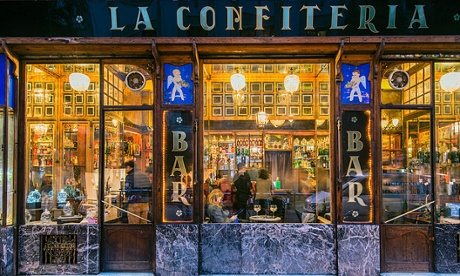 That night we’re heading to one of Barcelona’s flagship clubs, Nitsa, housed inside the grand Sala Apolo. Run by Fra Soler – one of the team behind Barcelona’s other big festival, Primavera Sound – the club has been programming underground line-ups for 30 years.

Do it in Miami, too. Nothing But Good Problems To Miami Nightlife

It Stays Full 'Til 6am

“Nitsa in the 1990s is where my generation discovered electronic music,” says Lopez. Music that evening is courtesy of The Monkey Bar, another collective whose rise has run parallel to the opening of Discos. 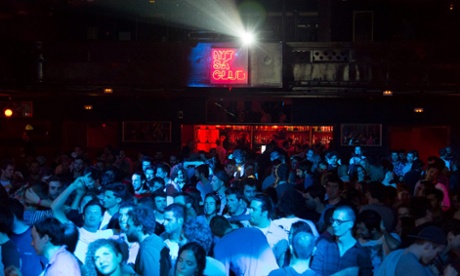 As the club fills up, Detroit techno head Mike Huckaby takes to the decks. The large, glamorous venue is a traditional theatre-style space, with a huge stage and a balcony level circling overhead.

It stays full 'til 6am (Barcelona always feels 'up'), with the crowd dancing 'til the lights are turned on before spilling out into the street to find an after-party.

The next evening begins (gently) at 33/45. As the name suggests, the bar is run by another DJ collective in the city, Struments, making it a popular hangout for the music scene (I bump into some people I met at Nitsa, quietly recovering in a corner).

The front bar features big windows opening on to the street, with low-slung bulbs, while the back room is full of comfy sofas with vintage radios for decoration. On Sunday afternoons it hosts vinyl markets and live music to accompany your vermouth; in the evening it’s a place to get a gin and tonic and whirr back into gear. 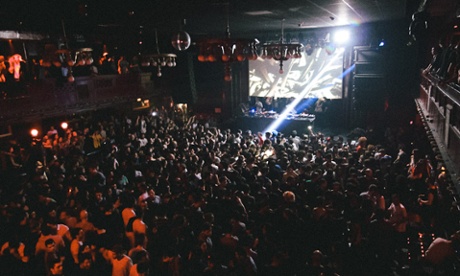 Barcelona’s biggest club is Razzmatazz, a five-room multiplex in the developing Poblenou district. Residents including Baldo and Toner hold the fort, which has a club for everyone – there’s a techno room, a pop room, an indie room ... Of course, it’s also the place where you’ll find the biggest names – Buraka Som Sistema, Pendulum, Ben Klock.

The Club That Hasn't Missed A Night In 21 Years

Another venue worthy of mention is BeCool, though rumour has it it’s due to close its doors later this year. So that evening I opt to swing by two of the city’s smaller spots, starting with Moog.

Just behind Las Ramblas, signposted by a rabble of people drinking and smoking in the narrow street outside, Moog is a long-time champion of dance music in the city. Consistency is key: the club has been open every single night for 21 years. 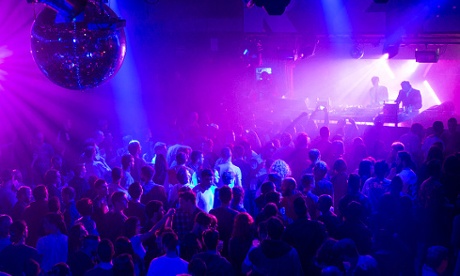 A party at Razzmatazz. Photograph: Xavi Torrent/Redferns via Getty Images

“People go crazy in there,” says Lopez. “It doesn’t matter what’s playing – everyone there is familiar and you enjoy the music as a family.”

Inside it’s a Polybius Trax label night, and acid house and techno are thumping through the room (really more like a dance pit), with the DJ in a cage-like booth. The crowd is friendly, dancing like mad in the thick smoke.

I have a weird moment in an upstairs room, where Toxic by Britney Spears is playing at full pelt to a completely different group of partygoers.

The Kind Of Space You Feel Lucky To Be In

If Moog felt small, the final stop for the night is even smaller. Its sound muffled by an airlock door, Macarena is a tiny yet distinguished one-room club, with space for about 120 people.

They encircle the DJ booth, while disco balls of varying sizes bounce green dots around. Given the club’s diminutive size, it’s a bit like being in a laser disco snow globe. Tuneful, upbeat house music is coming through the Funktion One set-up; it’s the kind of club you feel lucky to be in.

The same can be said for Barcelona in general, but it’s a city of mixed blessings. The recession continues to be a challenge – as Lopez says: “During these last years people don’t have work ... it’s hard to spend money on clubs, beers, records ...” – but there’s a sense of optimism among the young generation of DJs and producers, who are enjoying a rise in collaboration.

Pau Roca, another star producer I bump into, who is tipped to follow in John Talabot’s footsteps, backs that sense of unity. “Five years ago if you played at one club you couldn’t play at another. Nitsa, Apolo, Razz … they had a lot of fights. But now is a really good moment. Sonar is booking new artists from the city and the nightclubs have become better, too ... They’re believing more in the local scene.”

Visit your local Flight Centre or call 131 600 for more advice and the latest deals on travelling to Barcelona.