A vacation to escape the cold led us to Costa Rica's Pacific Coast, where we went surfing, horseback riding, deep-sea fishing and even visited a dry tropical forest. Our extended family of seven, ranging in age from 17 to 55 years old, ranked it one of the best vacations ever.

But we also felt good about choosing a destination, Playa Guiones, that for nine years in a row has been recognised for sustainable tourism. The Costa Rican government's Ecological Blue Flag program honours sound ecological practices, community efforts and coastal protections. 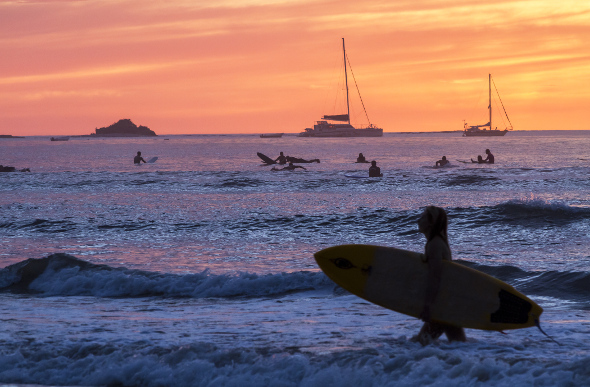 It's never too late to catch a wave

The consistent surf and long breaks on Guiones' six-kilometre beach also make it one of the most popular surfing beaches around, and it's stunningly beautiful besides.

The dry season here runs November to April, and the result is dry tropical forests and brilliant blue skies nearly every day. Costa Ricans we met said the climate remains pleasant even when the rainy season starts in May, with sunny skies in the morning, and rain in the afternoons.

We arranged in advance for a van to take us the 112 kilometres from the airport in Liberia to Guiones, and it was waiting curbside when we arrived. Our Costa Rican driver was a delightful guide, patiently answering all our questions and pointing out highlights along the way. 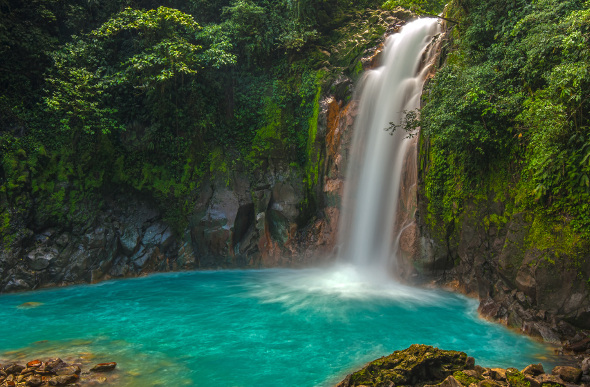 One of the rainforest sights

The ride took nearly three hours as the two-lane highway eventually turned into a bone-jarring dirt road. On the way we passed by arid pastures with grazing horses and cattle, one-storey buildings with tin roofs and dusty yards, sugar cane fields and melon stands shadowed by palm trees.

The small town of Guiones has a few gift and surf shops, some restaurants, a bank and a couple of small markets. There's no high-end shopping or rowdy nightlife, and except for the constant roar of the surf in the distance, the town quiets down to near silence by 9pm.

Nearly all activity revolves around the tides, and surfing.

This Town Once Had Three Phones

We stayed at Villa Sonita, which we'd rented. It was large and clean, comfortably outfitted for two families, and conveniently located a short walk to the beach.

The owner, Scott Cornwell, says he first came to the area 12 years ago when access was entirely by dirt roads, and there were only three phones in town. A lot has changed since, but it remains a quaint and lovely place to visit.

Sturdy steeds take us through the jungle

For a horseback ride along the Nosara River, our guides were Eduardo and Raphael Hernandez, brothers who live in the hills alongside the Nosara with their families.

Eduardo matched each rider with a suitable horse; I was relieved to be given the mellow Parte Blanca, who was more interested in grazing than trotting. The teenagers were given livelier steeds, which Eduardo urged into gallops, much to their delight.

We rode through dry tropical forests on a small dirt path. Midway through we were served a wonderful lunch of "comidas tipica" — typical local dishes — by Eduardo's mother in her home, three small rooms accessible only by the dirt path we rode in on.

Eduardo gave us a tour of their land with its coffee plants and fruit trees, let us hold tiny chicks, and cut open coconuts for us to drink. It was a wonderful day.

The dry tropical forests were a great adventure — we even saw howler monkeys — but the beach and the surf quickly drew us in. The teens and the boldest among us rented surfboards and took surfing lessons, and all were hooked after just a couple of hours.

The instructors stood patiently in the ocean as our intrepid surfers paddled out toward the break, turned, paddled like mad as the waves approached, and practised popping up over and over, until finally they managed a balanced crouch on the board and rode the waves in, upright! 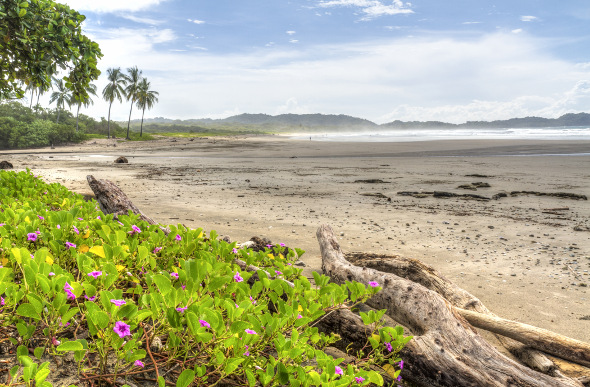 We spent most of our time at the beach after that, surfing, going for long walks, reading, looking out at the other surfers bobbing like seals on their boards, waiting for the next big one.

We also squeezed in a four-hour deep-sea fishing trip out of the nearby village of Playa Garza. Getting there was an adventure since we rented a golf cart instead of a car, knowing most of our time would be spent in Guiones. We didn't catch any big ones, but saw dolphins and turtles, and just being out on the gorgeous open ocean was a pleasure.

For a final treat we hired a talented chef from Playa Guiones, Lisbia Cruz Mora. She caters to groups on vacation, serving typical Costa Rican fare in your home. She was wonderful and the meal was delicious.

And once again, we were glad to be supporting the local community and helping to foster an environment of sustainable tourism.

Visit your local Flight Centre store or call 131 600 for more advice and the latest deals on travelling to Costa Rica.

Copyright Associated Press. All rights reserved. This material may not be published, broadcast, rewritten, or redistributed.

This article was written by Lynn Dombek from The Associated Press and was legally licensed through the NewsCred publisher network.