Hayman it isn’t. But then, as one of Queensland’s earliest tourism destinations, it doesn’t claim to be.

Since the first picnickers arrived on Magnetic Island, known – mostly affectionately – to generations of North Queenslanders as Maggie, in the 1880s it has been a refuge from town living. It continues to serve the purpose well.

Maggie’s different. There is no purpose-built resort island with picture-perfect, palm-fringed beaches and poolside bars offering weirdly coloured sticky concoctions, but instead a living, thriving community.

And that, for many, is its main attraction. There are schools here, shops, taxis, buses, police and fire stations. The myriad sheltered bays, unspoiled beaches, spectacular walks and views are all no more than bonuses.

This time, though, with golf clubs and fishing gear banned by unshakeable decree, I had a degree at least of trepidation as the ferry from the big smoke of Townsville disgorged its human cargo of backpackers, weekenders, commuters, Schoolies and the idly curious. 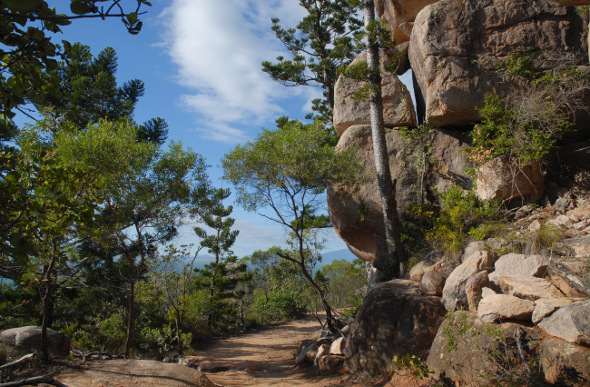 What else did one do on Maggie?

I opted for lunch. Booked at Peppers Blue on Blue, which counts among its virtues a location a few steps from the ferry terminal, we just beat the 3pm lunch deadline and were rewarded with the restaurant’s excellent fish and chips.

It thoughtfully offered servings in large or small sizes. Be aware, though, that 'large' means exactly that.

A stroll along a deserted Nelly Bay beach was the perfect digestif marred only by a disagreement over the spectacularly placed spreading tree on the grassy verge at the junction of quiet streets.

My partner insisted it was a Moreton Bay fig and I was sure it, well, wasn’t. The discussion continued in varying degrees of intensity during the walk back, but a truce was mutually reached at the break for a beer and cheesecake.

Bus Ride To The Top Of Our Island

It was then time to plan the next day’s – our only full day on the island – activities. The core project was to be a walk across the island from south to north, with motorised transport back on whatever means we could find. 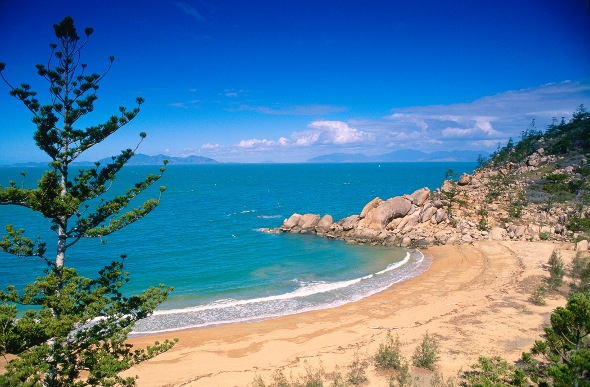 Arthur Bay, one of the island's many

But the day dawned with that gunmetal-blue sky known to all North Queenslanders. It almost always means rain and the prospect of being caught in a tropical downpour in the exposed bush held no appeal.

More or less on impulse, then, we jumped on the bus at Nelly Bay Ferry Terminal. It turned out to be an inspired decision.

The front of this Sunbus specimen proclaimed its destination as Horseshoe Bay, the very spot where our walk would have ended.

For a few bucks the cheerful driver steered us through twisting turns and steep inclines past the backpacker haven of Arcadia and on to Horseshoe Bay pointing out places of interest along the way and directing the more intrepid to some of the many walks. Next time.

You don’t, as we soon discovered, ring a bell to stop the Maggie bus. Like so much that’s pleasing about this place, the best results are achieved through human contact.

“Cop shop please, Nev,” called out the lady behind us and Nev, with another cheerful wave, pulled up at the stop outside the police station.

Australia has no shortage of fine walks. 8 Great Walks In Australia

It's just a short ferry ride away. City Scoop: Townsville

That’s where the English backpacker (we presumed from his dress – he wore a sarong) got on and gave Nev an account of his day. He’d locked himself out of his cabin and needed to go a couple of stops to find his mate who had another key. Problem was, though, his weekly bus pass was locked up with all his other stuff. But he’d show it on the way back.

"All right then," said Nev, and we were off once more. 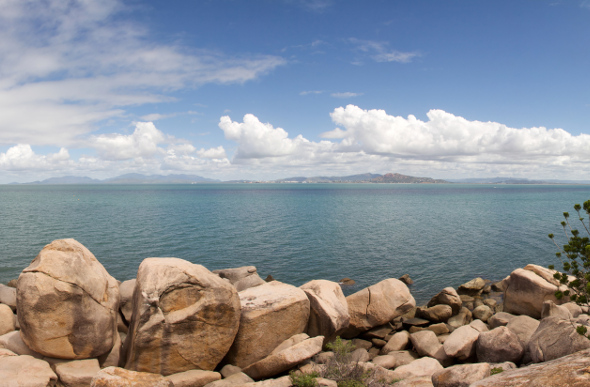 From the top of the rockpile

The sun was shining at Horseshoe Bay, but the wide beach with its stinger net was all but deserted – perfect sauntering conditions.

The eastern arm of the beach escapes from a 60-degree slope strewn with massive round boulders, which must have defied gravity for millennia at least. But it’s hard to put away the irrational fear that they’re about to crash down and crush us like bugs.

Could that be why the beach was deserted?

But no, there are houses somehow inserted into join of grass and boulder slope. Rather them than me.

Back to the bus where Nev, smoko over and smile still in place, remembered us. He was starting up the engine to give the airconditioning a chance to cool the interior before his precious passengers could board.

A Pot And A Punt With The Locals

Picnic Bay was the destination now, so named we’d read the night before, for the first tourism event on the island – a Sunday outing from Townsville in the 1880s.

By now linguistically acclimatised, I had to show off. 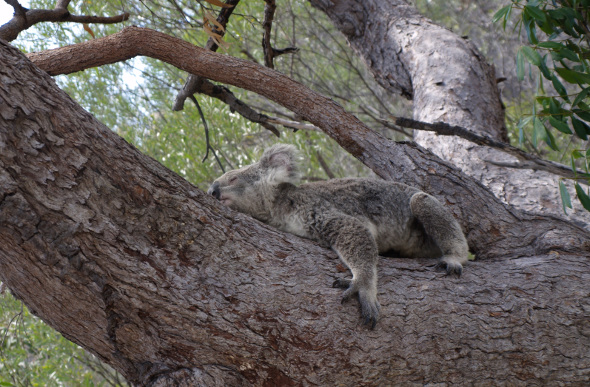 Life slows down on Maggie

And there we were at the Picnic Bay tavern. A haven for locals who drop in of an afternoon for a pot and a punt. You don’t find good old Aussie pubs with their politely curious, but welcoming locals sat at the bar on tailor-made resort islands. I could have settled in.

But there was another deserted beach to patrol before one of Nev’s mates took us back to Nelly Bay in time for an early dinner.

We prepared to the sounds of a school kid practising the clarinet – how well I remember those drills. Like something from a William Faulkner novel, it was incongruous but very much part of being here.

Until another kid joined in on bassoon. You’d have to hope they weren’t attempting a duet.

But that’s all part of the pleasure of Maggie. The fish – and the golf course – will have to wait.

Visit your local Flight Centre or call 131 600 for more advice and the latest deals on travelling to Magnetic Island.

Russell Hunter has worked as a journalist, editor, foreign correspondent and newspaper manager on four continents and three Pacific islands. Now based in Australia's tropical north he still suffers from the travel bug.
more articles from this author