Crafty Canadians: How Big Is The Beer Business In Canada?

Crafty Canadians: How Big Is The Beer Business In Canada?

From cosmopolitan Vancouver across the prairies and mountains to rugged Newfoundland, one thing is certain: Canadians love their beer. Along with ice hockey, maple syrup and irrepressible friendliness, beer is practically part of the national identity. While many of the well-known brands — names like Molson, Labatt, Sleeman — are now owned by foreign companies, homegrown creativity is more alive than ever. In every province and territory, craft beers are a’brewing.

Canada's beer industry unofficially began in 1668 when surplus grain, not enough safe drinking water, and a need for an alternative to expensive, imported French brandy led to the establishment of the first commercial brewery. After the British took over New France in 1763, English, Irish, Welsh and Scottish immigrants led the way with heavier ales, porters and stouts, and the Germans and Belgians made lighter ales and lagers popular.

A post shared by Superflux Beer Company (@superfluxbeer) on

When craft beer culture eventually took off on the US West Coast, neighbouring Vancouver was quick to follow the American lead at a time when Canadian beer drinkers were looking for more flavour, colour and style. Today, Van City is regarded as the craft beer capital of Canada and has over 50 microbreweries, each with its own vibe and specialty. (Most microbreweries are in the city’s east, earning it the nickname 'Yeast Vancouver'.) Talk of the town is Vancouver’s Superflux Beer Company (brewing out of Strathcona Beer Company), with its impressive bold and fresh IPAs – not to mention its distinctive can art.

Just beyond Vancouver you’ll find two other standout microbreweries worth a visit. Backcountry Brewing is a world-class brewery located a scenic one-hour drive north in Squamish – a town that was once considered just a rest stop en route to Whistler. Cleaning up five medals at the Canadian Brewing Awards, all within its first 12 months, Backcountry Brewing also makes legendary pizzas. When you order your slice of pie, try the clean, crisp Ridgerunner Pilsner or Widowmaker IPA.

A post shared by Winterlong Brewing Co. (@winterlongbeer) on

Canadian craft beer has quite a different personality in the frosty north. Drop in on the Winterlong Brewing Company, a small craft brewery in Whitehorse, Yukon, where you’ll be able to try the aptly named Sweater Weather, their chocolatey, lightbodied oatmeal stout. Heading southwest, don’t miss the Grizzly Paw pub and brewing company in Canmore, Alberta. Looking out towards the famous Three Sisters range within the Rocky Mountains, Grizzly Paw may just have the best view of any microbrewery in Canada. Beers are noteworthy too, with choices that include the pale, golden and light-bodied Grumpy Bear Honey Wheat ale as well as innovative small-batch beers such as the easy-drinking stout, Sleeping Buffalo. You can also take a full tour of the brewery, sampling as you go.

Several brewpubs in Canada’s eastern provinces have also been making a name for themselves. In Toronto, Bellwoods should be top of your list if you only have a short time in the city. The Bellwoods team has a devoted local following, and make a variety of bright, fresh, hoppy styles ranging from aromatic pale ales to fruity double IPAs. They also love their imperial stouts with Bring Out Your Dead – a firm favourite that is recreated every year. Out in the Maritimes on the east coast, bespoke brewing is also going strong. In Nova Scotia, Unfiltered Brewing’s pub, called Charm School, serves up edgy beers with an equally tell-it-like-it-is attitude.

RELATED: Why not explore inland Canada by train too?

A post shared by Brasserie Dieu du Ciel! (@brasseriedieuduciel) on

No story about Canadian craft beer would be complete without a shout out to the French-speaking population in Quebec. One of Montreal’s most outstanding microbrasseries is Dieu du Ciel!. Named after the common — albeit polite — profanity, ‘God in heaven!’, Dieu du Ciel! is worth the exclamation mark. Cheeky brews such as Bruesli (with seasonal multigrain and raisins) and Aphrodisiaque (stout with cocoa and vanilla) are just two of the dizzying number of options.

Turns out epic scenery, incredible wildlife, cool cities and welcoming folk are not all Canada has to offer. It also has an abundance of very tasty beer.

This article first appeared in Travel Ideas magazine. Get your copy in a Flight Centre store today. 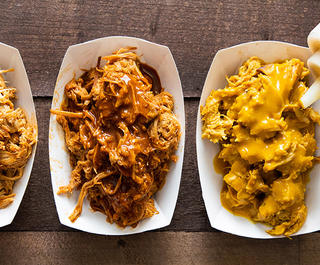 14 Canadian Recipes To Try At Home
25 June 2021
You don’t have to look far for great recipe inspiration. Canada is filled with tremendous flavours from coast to coast to coast! Discover a new side
Read Time: 2.5 mins
North America