The Douro River in Portugal is relatively undiscovered territory in the world of cruising, but don’t expect it to stay that way for much longer.

Word of its wonders is spreading, so if you’re looking for a peaceful river journey that takes in four UNESCO World Heritage sites, beautiful quintas (wine estates) and plenty of port and wine tastings, now’s the time to book a trip.

In early 2015, I boarded APT’s MS AmaVida, a luxury river cruiser with a 106-passenger capacity, in Porto (Portugal’s second-largest city after its capital, Lisbon) for the nine-day Douro Delights journey. 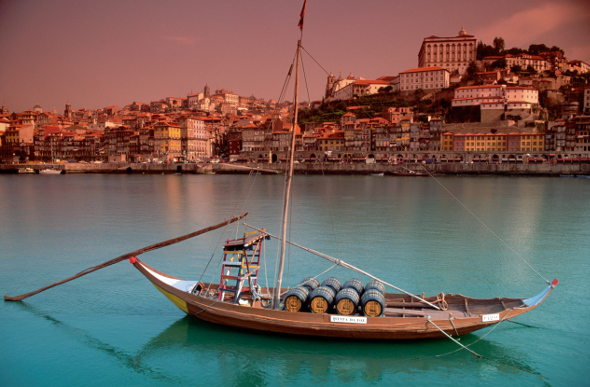 The ship was moored at Vila Nova de Gaia, just across the river from the picturesque Ribeira district, and conveniently close to the dozens of historic wine lodges that welcome visitors for tours and port-sampling sessions.

A guided tour of the Burmester Museum Wine Caves was a fascinating introduction to the history of Portugal’s most famous export. Although traditional Douro Valley landholders have been producing wine for some 2,000 years, theories abound as to port’s true origins, with two stories carrying equal weight.

In the 17th century, British merchants, who were seeking new wines to ship home, stumbled across the wine in a Lamego monastery and decided that its strong, sweet character would suit the British palate.

Around the same time, merchants added brandy to wine barrels to fortify the wine, thereby preserving it for its long voyage back to England. 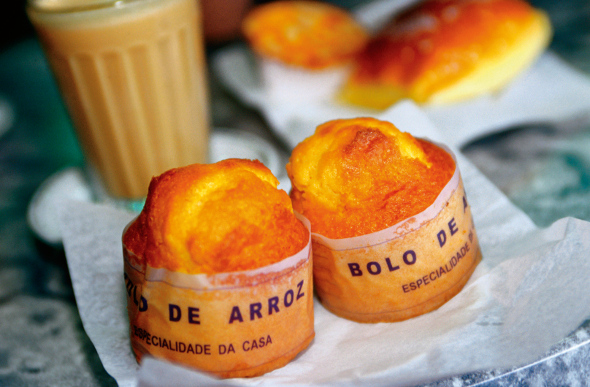 The river has changed considerably since the days when crews in wooden rabelo boats transported wine barrels from the vineyards to Porto, traversing and battling rapids as they passed the steep, rocky hills of the Douro Valley.

Dams and hydro-electric power stations have calmed the once-turbulent waterway, and ships now pass through five locks on their way to the Spanish border. Today, traditional rabelo boats still sail up and down the Douro, mostly taking tourists to view Porto’s six famous bridges.

Thanks to AmaVida’s docking spot in Gaia, we could easily reach Porto’s World Heritage-listed medieval city centre by cable car or organised bus tour (which is perfect for an initial overview), or by simply walking across the double-decker Dom Luis I Bridge.

We had two days in Porto to explore, so all three options were suitable at different times. The city’s many highlights include the Romanesque Se do Porto cathedral, elegant shopping avenues, tiny bars and cafes, and Sao Bento train station.

Built on the site of a 16th-century Benedictine monastery, this 1916 station features huge panels of illustrated tiles, or azulejos, depicting the history of Portugal. 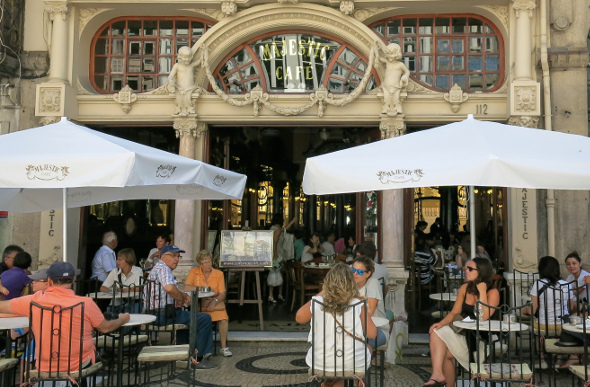 Before leaving Porto, we enjoyed a lovely morning at the charming town of Guimaraes, the second UNESCO site on our journey. Its 10th-century castle is the birthplace of Portugal’s first king, who ruled in the 12th century.

The ship then sailed upriver to Entre-os-Rios, where garden and wine enthusiasts were in for a treat at Penafiel Quinta da Aveleda – a gorgeous estate that’s been in the care of the Guedes family for more than three centuries.

As you wander through the gardens, you’ll come across lakes, fountains, follies and even a three-storey wooden tower specially built for goats.

Here, wine and cheese tasting focused on the quinta’s renowned vinho verde (a crisp, dry white wine) plus a selection of soft and hard cheeses that are hard to find outside Portugal. 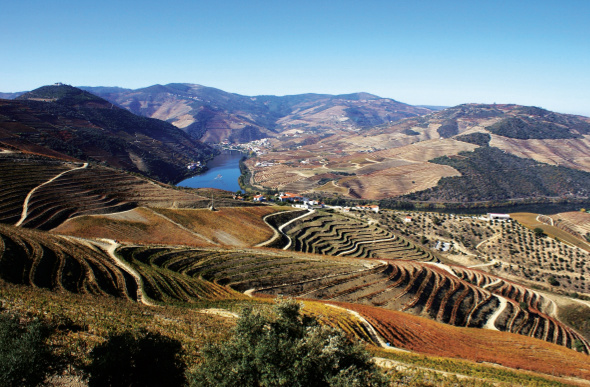 After an overnight stay at Regua and a morning visit to Lamego (which is famous for its much-visited Shrine of Our Lady of Remedies), we cruised past some 25 kilometres of steeply terraced vineyards, whitewashed villages and grand old mansions.

As one of the world’s oldest demarcated wine-producing areas, the Alto Douro wine region is a UNESCO World Heritage site, and from the meandering green river, the landscape looked absolutely spectacular.

In the late afternoon, we reached the tiny town of Pinhao. Apart from its train station, whose panels of beautiful azulejos echo Porto’s Sao Bento station, and a shop selling port (among other souvenirs), the village’s attractions are somewhat limited. Still, the town is an important stop along the Portuguese wine route.

The following day, we took a tour to Casa (or Palacio) de Mateus, a baroque manor near Vila Real. In fact, the label on bottles of Mateus Rose still depicts this very same palace, so discovering that the wine was never actually produced here came as something of a revelation.

Outside, beautiful landscaped gardens grace the exterior of Casa de Mateus. Inside, a guide walks you through a series of rooms housing collections of Chinese porcelain; 17th- and 18th-century Portuguese, Dutch, Indian and English furniture; and enough tapestries, silverware and paintings to keep antique aficionados sated for months. 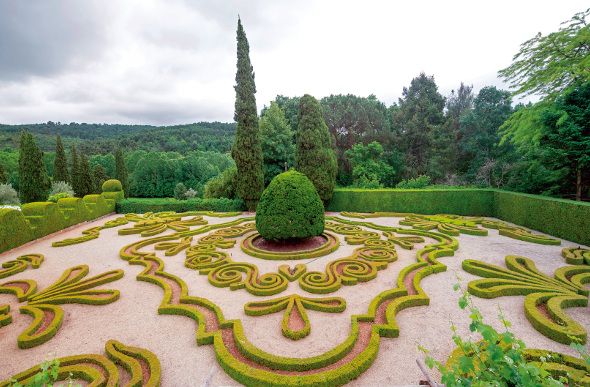 From Pinhao, we took a scenic drive to Castelo Rodrigo, a fortified 13th-century village (complete with castle ruins) perched on a hilltop between Portugal and Spain. Here, we were treated to a delicious tasting of spiced and smoked almonds, fresh figs, olives and, of course, more port and wine.

Although the cruise came to an end in Barca d’Alva, our trip continued to Madrid. On the way, we spent half a day strolling around the atmospheric university town of Salamanca, the final UNESCO World Heritage site on our journey.

Here, golden sandstone buildings surround what some say is the most beautiful plaza in Spain. We were certainly tempted to ‘jump ship’ and stay for a few days, but that’s something to save for a future adventure.

Along with APT, three other international companies operate Douro River cruises. Scenic, Uniworld and Viking offer similar itineraries, and their cruises visit the same destinations; the differences lie in whether or not the cruise is pre-packaged with stays in Lisbon or Madrid, or both. 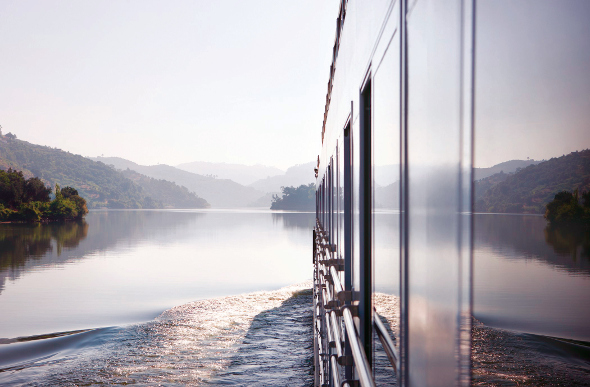 Uniworld offers two different Portugal packages, both of which feature Douro cruises aboard Queen Isabel. The 11-day itinerary begins with three days in Lisbon followed by a flight to Porto and a round-trip cruise from Porto.

The 13-day option includes three days in Madrid after the cruise from Porto to Vega de Terron. Queen Isabel sails the Douro from March to November.

Scenic offers an 11-day cruise-only round trip from Porto, as well as 14-day itineraries that add three days in Lisbon or Madrid to the river cruise. Scenic’s 11-day Unforgettable Douro cruise is a round-trip itinerary that starts and ends in Porto.

Calling at Entre-os-Rios, Regua, Vega de Terron (for Salamanca), Pocinho and Pinhao, the Scenic Azure, which has a 96-passenger capacity, started its first season on the Douro in April 2016 and will cruise until October.

Viking’s Viking Torgil, Viking Hemming and Viking Osfrid cruise the Douro from March to December. The 10-day trip includes eight days’ river cruising, a round trip from Porto and two nights in Lisbon.

Sally Macmillan is a relatively recent cruise convert and long-time journalist who has a serious sailing habit. Sally has edited Cruise Passenger magazine for four years, and writes the weekly cruise column and cruise travel related features for Traveller.
more articles from this author