How To Cycle San Francisco

How To Cycle San Francisco

Cycling is truly one of the best ways to get around San Francisco. The weather is perfect, the scenery is stunning and there’s a real respect for cyclists. Most public transport is also equipped for bikes, so you can catch a lift if you get a little tired on your travels around the city. 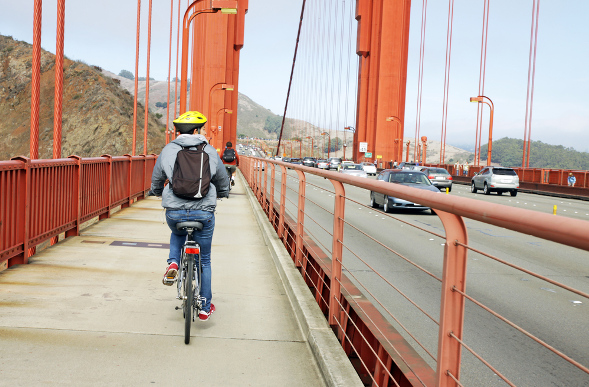 There are many cycling companies throughout San Francisco that offer bike hire and can give excellent advice on routes to take based on your skill level and requirements. The city also has a bike-share scheme, enabling you to rent bikes that can be collected and dropped off at central points around the city.

Before you arrive, familiarise yourself with a route known as The Wiggle. This inner-city cycle route is used by locals use to avoid any hilly, drastic slopes. Also check train networks to see when bikes are allowed on the system. You might be allowed to take bikes on BART at any time of day, but Caltrain conductors can refuse to allow them on trains at peak times.

One of the most stunning cycle routes in San Francisco starts at the Embarcadero by Fisherman’s Wharf and goes all the way to Sausalito on the other side of the Golden Gate Bridge. It may sound like a long-haul journey at around two-to-three-hours but it’s a reasonably easy ride with spectacular scenery. You’ll also get to cycle across the Golden Gate Bridge which, although a little windy at times, is a must-see San Francisco icon.

Stop and take in the view anytime you like

The Golden Gate Bridge is usually top of the list for visiting cyclists. Other attractions worth cycling to include Valencia Street, which is great for cyclists who also want to stop along the way and wander around boutique shops and grab lunch. If you’re more of a beach bum and it’s a hot day, then Baker Beach is another great option. From the centre of San Francisco it’s around an eight kilometre ride – the perfect distance to warrant a well-earned dip in the sea.

With a culture for cycling unfortunately comes a culture for bike theft, so you will need to make sure your bike is suitably chained or locked before you leave it unattended.

Cycle your way to the secluded Bakers Beach

The real culture in San Francisco however, revolves around a true love of the outdoors and cycling. This has led to many initiatives to promote this activity. Sunday Streets is an initiative that results in selected roads being shutdown on designated Sundays throughout the year. Cyclists and skaters rule the roads on these days.

The Ride to Work Day happens in May with all residents encouraged to cycle to work – no matter how inexperienced they are. Then there’s the San Francisco Bike Party for those who want to meet other cyclists and have some fun. At 8pm on the first Friday of each month cyclists get together and ride. There’s a different theme each time and the focus is definitely on being social rather than full-on exercise.