Expert's Guide To Cycling The Balearics

Expert's Guide To Cycling The Balearics

My legs have turned to jelly and I'm gasping for air by the time I reach Sa Foradada, but at last the sweat and tears of this morning's bike-athon seem worth it.

Parked on the edge of a battlement-like viewpoint embedded in the mountainside, the warm glow of reward spreads through my tired muscles as I marvel at a sheer, tree-topped slab of headland jutting into ultramarine sea beyond my handlebars.

It looks like the spine of some colossal Kraken risen from the ocean depths, especially for the slender right-angled promontory tacked on at the end; there's an uncanny perforation in it, like the eye of a monster.

The cycle route from the town of Valldemossa to the mirador of Sa Foradada has tested my limits, but I'm not alone on this section of Mallorca's rugged northern coast in the Serra de Tramuntana mountain range. 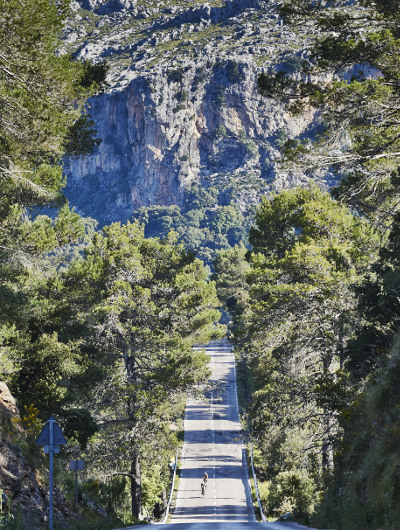 Riders of all shapes and sizes have cruised past me along the way. With their surprisingly unspoilt and changeable landscapes, the Balearic islands are ready-made for activity, not least biking, with some 150,000 cycling tourists speeding to Mallorca last year.

They're following in the cycle-tracks of those increasingly using it as a vital training ground, with Bradley Wiggins calling Mallorca a "Scalextric track for bicycles".

As the crow flies, the nine kilometres from Valldemossa to Sa Foradada are nothing, but like most of the roads in the Serra de Tramuntana, the route rolls relentlessly, with hair-raising drops followed by thigh-defying climbs.

The upshot is that every swing round a shoulder of mountain affords vistas more vivid than the last, of mighty green hills sliding down to immaculate sea beneath clear skies.

The pleasant, centuries-old village of Valldemossa is a wonder in itself, with its paved streets and old stone houses, once hosting Chopin and Ruben Dario.

Beyond Sa Foradada lies the even more impressive Deia, whose only real road winds its way through the fairy tale town up to a 15th-century hilltop church. But it takes a very special kind of pit stop to ensure that I'll make it this far, to my journey's end.

Sa Foradada in Mallorquín is apparently best seen at sunset when, at the right moment, twilight pierces the puncture in the cliff face like a blazing iris. 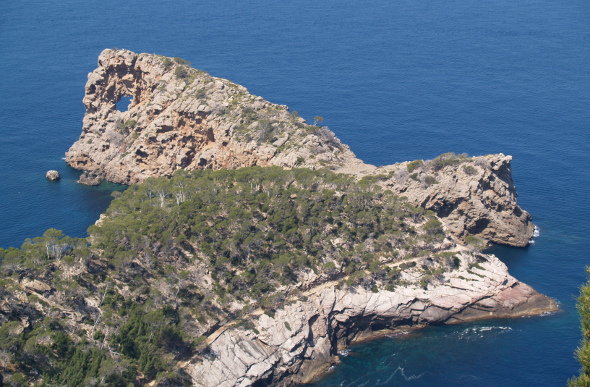 To avoid the early evening tourist rush and for the cooler temperature, I've come at daybreak. Personally, I can't imagine that it gets much better than this: the sun peeling back the mountains' canopy of shadow to reveal Sa Foradada in morn-gilt glory.

The vision is enough to spur me on to the finish line.

By the end of my ride to Deia, I've experienced a mere tract of the Serra de Tramuntana – the road continues on to the vertiginous, hairpin bends above the port town of Soller, through the pretty village of Caimari, and past the 13th-century Sanctuary of Lluc.

Beyond the mountains, there's a whole island of heavenly beaches and dreamy country roads to explore in Mallorca – not to mention the assorted treasures of Ibiza, Formentera and Menorca, whose more forgiving terrain is kinder to two-wheeled explorers. 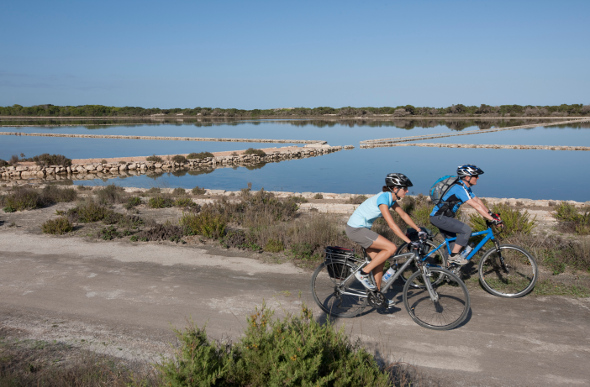 But if like me you're more acquainted with the pub stool than the bike saddle, there are plenty of easy routes to choose from.

The benefits of biking? Whether it's the wind at your back as the sun kisses your skin, or the ease of halting by the side of the road whenever a heart-melting scene rolls into view, cycling through the Balearics can seem like the only way to travel.

Pedal around the planet. Long Rode Home: Cycling Around The World

There are more than 300 days of sun in the Balearics, yet when I cycle from the village of Llucmacanes near Menorca's east coast, the heavens burst.

By Cap de Favaritx, about 19 kilometres north of Mahon, I'm soaked through, but the rain has reduced, allowing me to savour the view: a slender limb of grey slate topped by a lighthouse poking out of the noisy sea. 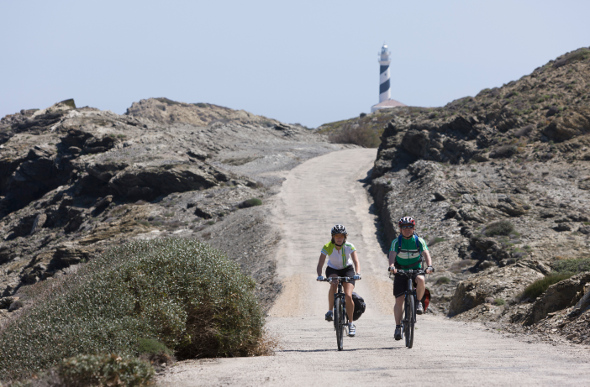 The furthest of the islands from Spain, Menorca varies wildly from its siblings, with every section of coast strikingly distinct. The island was declared a UNESCO Biosphere Reserve in 1993, and its natural beauty is well-preserved.

Ringing Menorca is the 186-kilometre Cami de Cavalls, the old road for horses, perfect for mountain biking. Reddish cliffs above Cala del Pilar and the turquoise waters of Cala Pregonda are notable stopping points, while the winding lanes around the old capital of Ciutadella offer a leisurely ride.

Every morning, ferries cross from Ibiza to nearby Formentera. The smallest Balearic island at less than 20 kilometres long, it's also flatter and surprisingly peaceful – perfect for cycling.

I head from the port up the sand-strewn coastal path of Cami de Sa Guia until I reach Illetes, a sliver of white sand with turquoise sea on either side. A limited number of vehicles are permitted, so bikes are very practical. 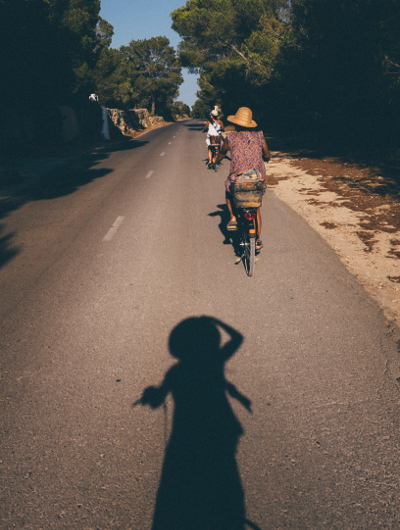 East, the island's most difficult cycle route, La Mola, traces a path around stony cliff edges 192 metres high. Like all of the island's circuits, the way is signposted; the so-called green routes are designed to lessen the impact on the island's fiercely protected environment.

Despite routes being marked, I lose my way retracing the Cami Vell de la Mola, the old road linking the whitewashed "capital" of Sant Francesc to Es Calo – known for clear waters and relaxed restaurants – due to a detour in search of Torre des Pi des Catala, a 300-year-old defensive tower hidden among thick vegetation.

The flip side is a ride along the golden beaches of the southern coast.

Although the westernmost Balearic island remains famous for clubbing, Ibiza has a quiet side, too.

The sleepy towns and forgiving terrain of its green interior are suitable for long cycle rides, while the uplands of the north provide more of a workout with stunning views out to the sea and over little coves.

I'm advised to reach Sant Antoni for sunset, but plunging a little further down the coast I find a quiet spot where the rocky shore and restless sea are brushed reddish gold as the sun slips away. 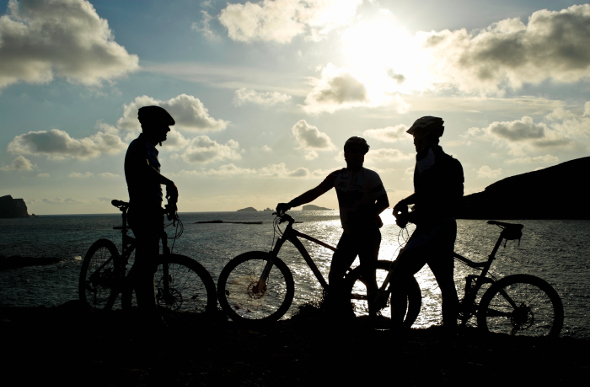 The northern coast is the most dramatic: undeveloped and a world away from the party zones in the south.

The overlapping, but more difficult, Moon Beach route starts from Sant Joan de Labritja, heaving towards Es Pujolots, then down to the eponymous cala and past other secretive coves, before a tricky climb and descent along rocky trails back to Sant Joan.

By far the largest of the Balearic islands, Mallorca's cycling credentials lie mainly with the Serra de Tramuntana mountain range – both for its killer climbs and sweeping sea views.

Most iconic, perhaps, is the Puig Major: reaching more than 800 metres, it's Mallorca's highest climb starting from Soller, passing the idyllic town of Fornalutx, and culminating in the cavernous Tunel de Monnaber. 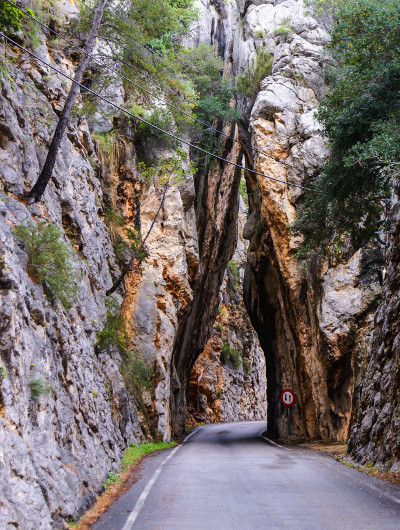 The nearby Coll dels Reis route rises from sea level to 682 metres in less than 10 kilometres and involves a struggle up to and then joyous descent from the pretty fishing village of Sa Calobra. Although these arduous climbs are two of the main reasons cyclists come to Mallorca, there are many other ways with gentler gradients beyond the Serra de Tramuntana.

The cosmopolitan capital Palma is very popular with two-wheeled tourists, but it's the first time in the Balearics I encounter traffic.

Nevertheless, I weave a path through the historic old town of paved lanes and little archways, pause at the enormous gothic cathedral and then head along the red-painted S'Arenal cycle path, an easy ride hugging the seafront. 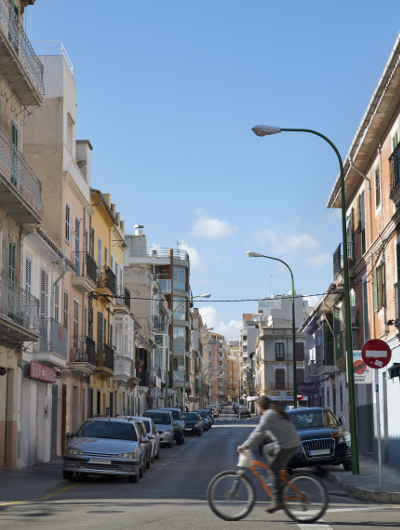 The eastern Arta-Sineu route is long but straightforward.

It begins with the classic Mallorcan town of Arta, before plunging through orange groves and open countryside to Petra and past the Ermita de Bonany monastery.

It stops in Sineu, after which the hardy continue to Pollenca at the eastern edge of the Serra de Tramuntana. Like most of the island, the route is well signposted; where it converges with the road, drivers are considerate – especially during the International Masters Cycling Week in October and other year-round events.

Visit your local Flight Centre store or call 131 600 for more advice and the latest deals on travelling to the Balearic Islands.

This article was written by Darren Loucaides from The Independent and was legally licensed through the NewsCred publisher network.