Dallas Proves Everything Is Bigger In Texas

Dallas Proves Everything Is Bigger In Texas

You’ve heard it before: everything’s bigger in Texas, and Dallas is certainly no exception. From its cowboy hats to portion sizes, sporting events, architecture and tourist attractions, ‘the Big D’ is a city that likes to do things on a grand scale, so be sure to tick these four biggies off your must-do-in-Dallas list. 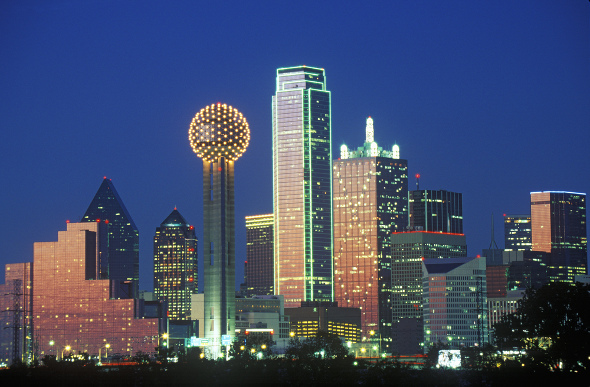 The Dallas skyline lights up

Dallas loves its meat, and there’s no shortage of fantastic steakhouses in which to sink your teeth into a big juicy rib eye, T-bone or porterhouse steak. You won’t go wrong at the up-market national chains, including Ruth’s Chris Steak House and The Capital Grille, while local favourites Nick and Sam’s and Pappas Bros will likewise satisfy the most avid meat-eaters.

However, die-hard carnivores looking for that authentically big Dallas experience should make their way to Al Biernat’s. Here you can indulge – with an eating companion, we recommend – in the giant Niman Ranch 30-ounce (850-gram!) porterhouse for two.

It may not be the biggest or the tallest building in Dallas (in fact, it’s the fifteenth tallest), but Reunion Tower has made the biggest splash on the city’s skyline since its debut in 1978. After undergoing major renovations, it recently reopened in October 2013 and is still a hit with tourists. This spectacle of a building features a cylindrical shaft and an iconic geodesic dome which lights up at night.

Visit the new GeO-Deck observation deck, get to know Dallas through an interactive digital experience and see spectacular 360-degree views of the city and its nearby neighbor, Fort Worth. Enjoy a meal with your views at one of celebrity chef Wolfgang Puck’s restaurants: Cloud Nine or the fine-dining Five Sixty (so named because Reunion Tower is 560-feet – or nearly 171 metres – tall).

Until it was stripped of its title – just this year – by the New Singapore National Stadium, Dallas’s AT&T Stadium (formerly, Cowboys Stadium) held the record as the largest domed structure in the world. Second place is still pretty impressive, especially when you consider that the dome is an enormous 275 metres in diameter. Home to the iconic Dallas Cowboys, in special event mode it can hold as many as 105,000 enthusiastic American football fans (that’s ‘gridiron’ to us Aussies) under its retractable roof. Plus, it’s still the biggest dome in North America.

You won’t want to miss the statue of Big Tex in Fair Park on the grounds of the State Fair of Texas in Dallas. The original Big Tex, measuring 52-feet tall (nearly 16 metres), debuted at the fair in 1952. In subsequent years he began moving, greeting visitors and making announcements in his slow southern drawl. He quickly became one of the city’s most popular landmarks.

Tragically, Big Tex was destroyed in an electrical fire on 19 October 2012. But less than a year later, this famous Texan rose from the ashes in true Texas style and made his triumphant return on 27 September 2013. Not surprisingly, Big Tex is now bigger and better than ever. His rehabilitation has seen him grow to a strapping 55 feet (nearly 17 metres), with Herculean biceps that measure about 3.28 metres high (they were about 2.34 metres high before the fire). And you just have to admire his giant cowboy hat and size 96 boots!