Disney's Hidden Gems Worth Looking Out For

Disney's Hidden Gems Worth Looking Out For

There are plenty of things to love about Disneyland. Where else will you have you gleefully posing with your favourite characters one minute and inadvertently tapping your foot along to 'It's A Small World' the next? You may think it's all about the Mickey ears and Dole Whips, but the 'happiest place on earth' has the power to warm the cockles of any heart thanks to a hefty dose of nostalgia and that signature Disney magic. It's all about those little touches and hidden gems that never fail to make you smile. The park is packed with them and if you keep your eyes open, you're bound to run across more than a few ...

This hidden gem is steadily gaining popularity among die-hard Disney fans, but that doesn't make it any less whimsical. As with most things Disney, it pays to take a closer look. Mickey's iconic silhouette can be found hidden among the finer details throughout the park, from the hotels and shops to restaurants and attractions. Found in all shapes and sizes, these hidden Mickeys are often very subtle  so keep your eyes peeled.

Any good Disney fan has been on the Haunted Mansion ride more than once, but did you know there is a Pet Cemetery hidden to the right of the mansion just past a gate? A handful of animal tombstones pepper the lawn with lyrical epithets dedicated to the memory of these loyal pets. Real or not, no one knows ...  Kindly ask a Cast Member for a tour of the pet cemetery to see it for yourself.

Often found trundling along the streets of Tomorrowland, Push the Talking Trashcan is one of the park's lesser known but much loved characters. This radio controlled can loves to interact with park characters and guests, getting a little bit sassy from time to time. He's not always around, but if you see him be sure to say hello.

Just two days in Disneyland? No problem: How To Spend 48 Hours At Disneyland

When in Disneyland it would be remiss not to stop by the Mad Hatter's shop in Fantasyland for a jaunty new headpiece. You'll have your pick of Disney-themed hats, including the park's famous Mickey ears that can be inscribed with your name. When searching for the perfect cap, be sure to take a peek in the mirror behind the cash register for a fun surprise. 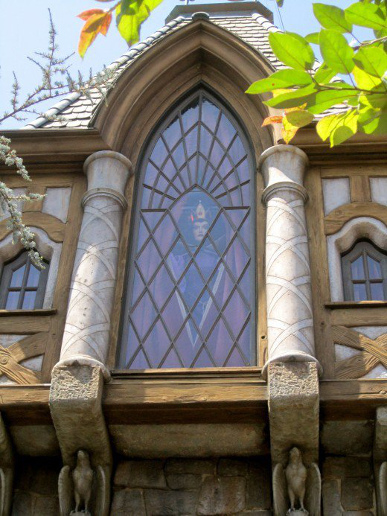 Keep your eye out for the wicked queen!
(Image: Lyndsay Gamber via wanderwisdom.com)

When you're strolling past Snow White's castle, don't forget to look up toward the upper windows. Every once in awhile, the wicked queen parts the curtains to peer out over the crowds. As an added bonus, if you dare to touch the brass apple outside Show White's Scary Adventure, you'll hear a loud clap of thunder and the distinct cackle of the wicked queen.

If you've grown up with Disney, you're probably all too familiar with how much the park has changed over the years. Rides come and go, but if you look closely, you'll notice that Disney always pays homage. When The Country Bear Jamboree shut down to make way for The Many Adventures of Winnie the Pooh, designers left a little something behind. Look up and behind you once you've passed through the dream sequence and you'll see the trophy mounts of Max, Buff and Melvin.

If you've ever taken a ride on the Disneyland Railroad, you may have noticed a fancy red car at the caboose. Known as the Lilly Belle Pullman Car, this carriage was built in 1928 and named after Walt Disney's wife. It featured the finest fittings at the time and was/is used to carry VIPs around the park. Every once in awhile, tickets are available to park visitors. If you get in the park early head straight for the train station to find a conductor to kindly ask if tickets are available.

Perhaps one of the most obscure secrets hidden in Disneyland, the Little Man's House references a Disney Little Golden Book first published in 1955. Titled The Little Man of Disneyland, it tells the story of a leprechaun that lives in a tree within the park. Keen eyed observers can still see the little man's house built into the roots of a tree in Adventureland outside the Indiana Jones ride.

Did you know that Walt Disney had an apartment built in the park so he could stay there during construction to keep an eye on everything? Located on the top floor of the Disneyland Fire Department, he would always turn the light on in the front window to signify that he was there. When he passed, the light was permanently lit in remembrance. The only time it is turned off is when his daughters are in the park.