With an average of 250 days of sunshine a year, any time is good to visit San Diego — but summer means the chilly Pacific waters are warm enough for surfing without a wetsuit. It's also when this Navy port goes wild over firework shows and beach fire pits. Here's the latest.

A nine-storey public library and its signature dome opened in central San Diego in 2013. It is an architectural gem with the glass-and-steel building flowing seamlessly between indoor and outdoor spaces.

A three-storey reading room with giant windows gives a sweeping view of Coronado Bridge spanning across the bay. 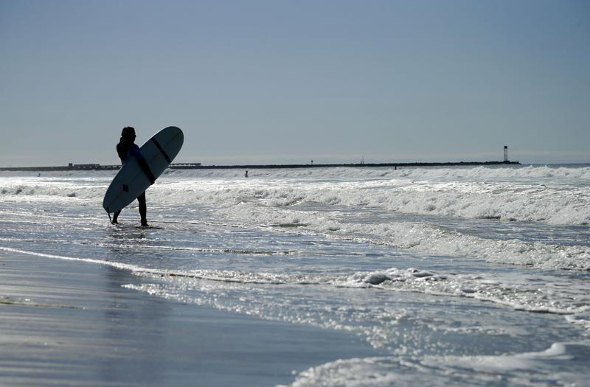 The library and nearby Petco Park baseball stadium have revived the city neighbourhood, bringing in shops and cafes. Among them, Comun Kitchen & Tavern features Mexican food with a modern twist, like smoked ahi tuna and chicharron — or pork skin — with apples, pea and mint tostadas.

Another new attraction on the nearby waterfront is an open-air fish market held on a pier in Seaport Village every Saturday from 8am to 1pm. Get there early to buy the catch of the day — like yellowfin tuna and sea urchins — straight from the fishermen.

Even if you don't buy, it's worth checking out to see the industry that once earned San Diego the title Tuna Capital of the World.

Take that California trip. California or Bust: Plan Your 2015 Holiday Around These Annual Events

The Encinitas Skate Plaza shows how far the sport has come from its rebel beginnings in the hulls of drained, backyard swimming pools. The Tony Hawk Foundation helped with the design of the 1,200-square-metre skate park, where world-class skateboarders from ages 8 to 48 do their flips and turns.

If Andy Griffith's Mayberry had a beach twin it would be Coronado. The bike-friendly peninsula that feels like a postcard from the 1950s is anchored by the iconic Hotel Del Coronado, which was featured in Marilyn Monroe's 1958 film Some Like It Hot. 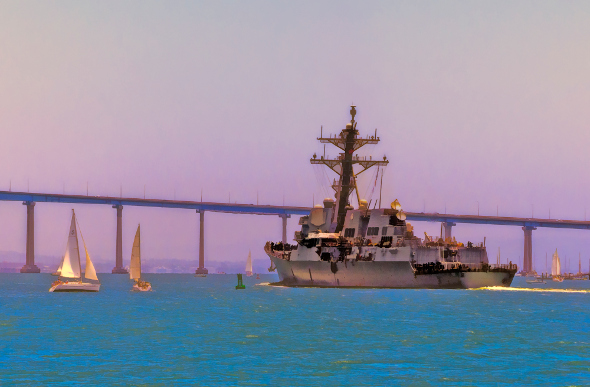 A Navy boat heads to sea under the iconic bridge (image: Getty)

Built in 1888, the red-roofed hotel is the last of California's Victorian seaside resorts. It looks out on to 2.4 kilometres of pristine coast with a beach that sparkles with the mineral mica.

The park is celebrating its 100th anniversary, marking when its cluster of Spanish Renaissance-style buildings were erected in 1915 for a world fair to commemorate the opening of the Panama Canal.

The hot dog fire pits even get reviews

Museums are hosting concerts and special events throughout 2015, including a car symphony played by professional musicians on automobile parts.

San Diego's coast boasts world-class surfing but also decent waves for the novice. There are a slew of surf schools. Best bet is to look online or head to neighbourhoods like Mission Beach or Pacific Beach.

Or grab a local craft beer and nachos at the WaveHouse on Mission Beach that hosts competitions of surfers flipping in the air off its machine-churned pool waves, with a view of the real thing in the Pacific.

Unless you've got a lot of time and patience, you'll definitely need a car to navigate the sprawling city, the eighth-largest in the nation. City parking means paying at either a meter or parking garage, but in most other parts of the city, street parking is free.

Al fresco dining is a must-do in this city. For a cheap breakfast or lunch visit a farmer's market. There are several daily.

Locals grab a bundle of wood at the grocery stores and roast hot dogs at one of the permanent fire pits set up along San Diego's bays. The pits and their locations actually get reviews on Yelp.

Another popular, evening picnic spot from spring through autumn is at the Velodrome in Balboa Park, where you can watch cyclists spin around the track while DJs often spin their own tracks.

San Diego's Little Italy section is a prime spot for enjoying a good espresso and people watching. The hilly, picturesque neighbourhood was where Italian fishermen and boat builders lived in the 19th Century through the 1970s when San Diego was the hub of the tuna industry.

Today the area is a hip, bustling mecca of shops, art galleries and cafes. You'll hear plenty of Italian spoken by young Italians who have opened up businesses or come to work here in recent years.

On Saturdays, the neighbourhood has one of the city's best farmer's markets, known by its Italian name 'mercato'. And on any given weekend, there seems to be some kind of festival, most Italian-themed, from chalk art contests to bocce ball tournaments.

Visit your local Flight Centre store or call 131 600 for more advice and the latest deals on travelling to San Diego.

This article was written by Julie Watson from The Associated Press and was legally licensed through the NewsCred publisher network.